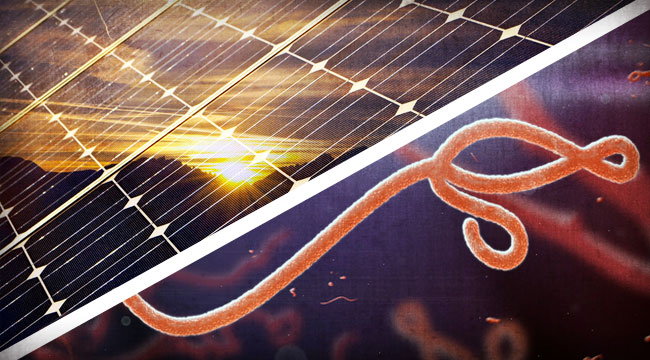 Solar to Save the World, Ebola to Maim it

“Here’s a quick quiz,” our tech whiz Stephen Petranek writes: “What U.S. industry has grown its installed base by more than 418% since 2010?

“What industry expanded 100% globally last year and is now employing over 2 million people? I’ll give you one guess, and here’s a hint: It’s an industry with a future as bright as its power source:

“The answer is the solar energy industry.”

“Many things,” Stephen writes. “We need more energy due to population growth. And billions of people rising into the global middle class also means rising demand for energy. Also driving demand for alternative energy sources are environmental concerns over the impact of hydrocarbon fuels. Governments around the world — including here in the U.S., have provided considerable incentives for shifting toward ‘green’ energy sources.

“Solar power is the fastest-growing part of the energy mix.”

“Furthermore, solar has been following a ‘Moore’s law’ of its own. Sharply falling prices are bringing the cost of electricity derived from solar energy into parity with traditional energy sources. If the trend continues, solar will actually become a cheaper energy source, without taking into account negative external factors such as air pollution.

“But air pollution is a big factor,” Stephen goes on. “Solar is very clean at the point of power generation, unlike hydrocarbon-burning plants. And it’s more than just fear of carbon dioxide emissions that’s driving adoption of solar. It’s having air fit to breathe. We’ve all seen what coal-burning plants can do in places like China.

“Emissions from coal plants can kill even when the smog isn’t visible. In 2010, the World Health Organization estimated that over 1 million urban deaths were attributable to outdoor air pollution. The American Heart Association estimates that particulate air pollution causes some 60,000 deaths in the U.S. each year. Did you know a coal-fired plant dumps more radioactive material into the environment than a nuclear-powered one?

“Solar could help a great deal by replacing some of our dirtier energy sources, especially coal. But solar suffers a big disadvantage when compared with these common energy sources. A coal or gas plant can run 24 hours a day, 365 days a year. A solar plant, however, won’t produce power when the sun isn’t shining.

“Furthermore, during peak production — when the sun is shining brightest — solar might be putting out an unnecessary surplus of electricity.

“Since solar is an intermittent power source, other power sources have to be ready to pick up the slack as needed. For solar power to truly be competitive, a way to store energy is needed for those times when the sun isn’t shining and to store surplus power when it is.

“Suppose a company found a way to do that — and not only store energy from solar plants, but also create the possibility of transforming it for use as a clean transportation fuel. It would make an already disruptive energy technology even more transformational.”

We bring up solar energy for another good reason.

Just recently, we invited our friends John MacIntyre and Dan Meredith, to talk about energy independence and share their tips on how to lower your energy costs.

We’re toying with the idea of making these types of podcasts a regular deal. First, we want to know what you think about the idea.

Will you listen to a regular LFT podcast?

In other news, a new study from a team of Virginia-based researchers picks apart how Ebola is spreading and the only REAL way to stop it…

Here’s the timeline of Dr. Spencer’s departure from Guinea, to when he started to feel sick, to his diagnosis of Ebola, courtesy of NY Daily News.

With an estimated worst-case scenario of 980,000 dead by Feb. 1, 2015, the need for more information on how Ebola is actually spreading — rather than passive speculation (ahem, CDC) — is crucial.

The study, funded by the NIH and conducted by independent researchers “dissects the current rates of the spread of Ebola and the likely impact of various strategies for controlling this epidemic,” a Foreign Policy article reads.

The results are unsettling.

“First, the virus is spreading very fast now,” the Foreign Policy article goes on, “with each infected person in Liberia and Sierra Leone passing Ebola on to, on average, 2.22 others. And contrary to the experiences in 20 past Ebola epidemics (in which the majority of cases were transmitted in hospitals or during funeral preparations), the virus is now primarily spreading in the general population through everyday activities.

“This means that the strategies that were used to successfully control past Ebola epidemics — cleaning up the hospitals, quarantining infected souls within those newly sanitized facilities, and stopping traditional funeral practices — will not have the same significant impact in the current catastrophe.

“Therefore, according to these researchers, even if there were a miraculous treatment available right now, it would barely make a dent in the epidemic.

The study’s conclusion? “[F]or at least in the near term, some form of coordinated intervention is imperative. The forecasts for both Liberia and Sierra Leone in the absence of any major effort to contain the epidemic paint a bleak picture of its future progress, which suggests that we are in the opening phase of the epidemic, rather than near its peak.”

We need a new game-plan.

Here’s the researchers’ suggestion: Round up all of the infected, and everyone they’ve come in contact with, and “remove infected individuals from the general population and place them in a setting that can provide both isolation and dedicated care.”

Are African healthcare workers in a position to be able to do this? No. Not one bit.

As Dr. Michael Osterholm outlined during our visit at the Johns Hopkins Ebola symposium, there’s much more to understand about this particular strain of Ebola.

“Today I’ve been given permission, something I’ve known about for a few weeks,” he told us during his speech.

“Gary Kobinger and colleagues at Winnipeg, the Canadian national lab, actually took one of the strains from Guinea and put it into macaques [monkeys] a little over a month and a half ago. What they saw was remarkable.

“It was unlike any of the Ebola viruses they’ve seen in monkeys. It was much much more severe. The pathology in the lungs were remarkable.

And as Gary said, who is one of the most prominent Ebola virologists in the world said, “It is very worrisome to me… what I saw there.”

Point? There are still many unknowns when it comes to this particular outbreak. Too many.

We believe it’s responsible to over-prepare, then go with the flow. Adapt to whatever comes.

Ed. Note: The best way to over-prepare, then go with the flow is by taking advantage of Laissez Faire’s new Ebola guide. It took researchers over 240 hours to put together and it will tell you everything you need to know to get prepared as soon as this week. Learn more by signing up FREE: Click here.