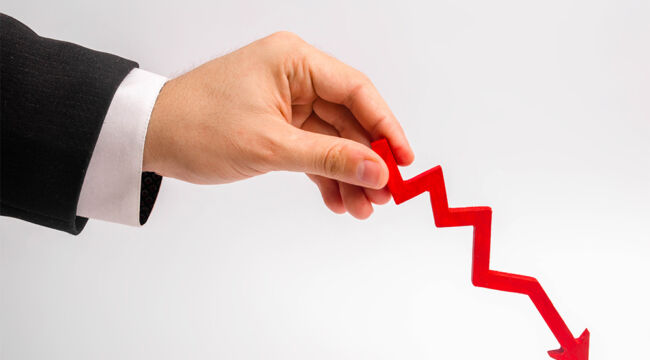 “So goes January, so goes the year.”

It is an old Wall Street wheeze referring to the stock market. If it holds true, if the remainder of this year goes like January… the stock market is in for hard sledding through Dec. 31.

And the Nasdaq Composite? It has traveled 1,615 points backward since Jan. 1— descending clear into the despondency of “correction.”

Does this conventional wisdom have anything in it?

The Stock Trader’s Almanac — a sort of Old Farmer’s Almanac for the stock market — argues yes.

It has given the data since 1900 a thorough poring over. Its drudge work reveals that January’s results were twins of the year’s results… some 75% of the time.

It represents what the numbers men term “statistical significance.” And plenty of it.

Will 2022 see off the long odds? Will the stock market close the year within the winning 25th percentile?

It may, concedes Mr. Lance Roberts of Real Investment Advice. Yet omens are lined up against it:

This year, stocks will be dealing with the highest inflation rate since the late 1970s, excessively high valuations and an aggressive policy change by the Fed.

Let us have a go at this bearish brew, in the order of ingredients listed…

We begin with inflation. December inflation leaped 7% past the previous December. By certain metrics inflation goes at the most fevered rate since the 1970s.

The word “transitory” no longer spills from Mr. Powell’s babbling lips… or from others’ of the professional economics mumbling classes.

Why does inflation menace the stock market?

And rising interest rates can injure the stock market — and often do.

The cheap debt corporations took on is no longer cheap. The debt then hangs upon as millstones hang from necks.

They can no longer afford stock buybacks and other financial wizardry that levitate their stock prices.

What do interest rates presently indicate? That inflation is on the stretch…

1.83% is nothing against the historical average. But bond yields generally move in inches, feet on rare occassion.

Will the business sustain? We have no answer. We have witnessed several bond yield insurrections these past years and they all lost their steam — all of them, in each instance.

Yet inflation hadn’t bubbled and gurgled as it bubbles and gurgles presently. The stock market may suffer harsh shocks if inflation runs yet.

By certain metrics, stock valuations are second highest in history, lagging only 1999–2000.

That is, by certain metrics, stocks are the second-most costly in history, lagging only 1999–2000.

Today’s impossible valuations can only be justified by the prospects of double-digit economic growth.

Yet what evidence indicates the economy and corporate earnings will expand at double-digit rates? By our reckoning very, very little evidence exists.

The stock market drummers have failed to persuade us otherwise. And we believe Humpty Dumpty stocks are in for a terrible fall.

The Federal Reserve has telegraphed rate hikes and reduced asset purchases this year.

The stock market has depended particularly upon the asset purchases and their ensuing liquidity flowings.

Recall, the market has fattened upon corporate stock buybacks under easy financial conditions.

What happens, then, when the Federal Reserve rips away support? Mr. Lance Roberts:

With the Fed on deck to start tightening policy heading into 2022, there is a significant risk that buybacks will slow. Such was the case when the issuance of cheap debt provided the funding for many of these repurchases…

Importantly, companies that performed uneconomic buybacks will find themselves with financial losses, more debt and fewer opportunities to grow in the future…

The most considerable risk for investors betting on higher stock prices isn’t the Fed. Instead, it is the reversal of “stock buybacks.”

Roberts notes — importantly — that rate hikes are not the great market bogey. But tight liquidity taps, worked hard to the right-hand position… are:

The media is correct that “Fed rate hikes” won’t cause a bear market.

As is always the case, the event that changes the “bullish psychology” is always unknown. However, the eventual market reversion is almost always a function of changes in liquidity and a contraction in earnings.

We have addressed the likely contraction in earnings. In support, let us enlist Mr. Michael Kramer, Mott Capital founder:

And so you have the poison recipe: barreling inflation, fantastically stretched stock valuations and a Federal Reserve fixing to bottle liquidity.

And so you likewise have the reason why stocks in 2022 may go the way of stocks in January 2022.

It scarcely rates mention — we will mention it regardless — the stock market may thunder ahead this year, despite all obstacles before it.

We have choked down far too much of our own to risk another ration.

Yet one year will find the naysayers correct. Will it be the year 2022?