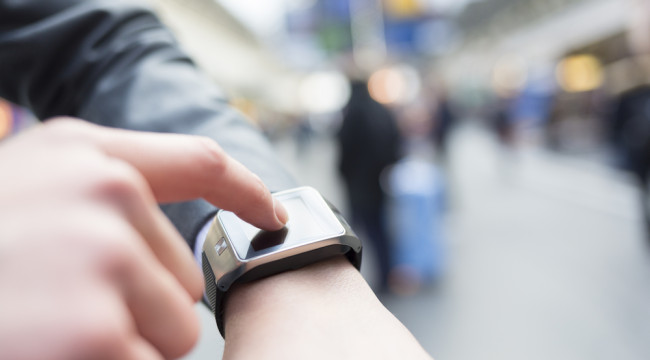 Whaddya know? The hottest strategy in exchange-traded funds could go “horribly wrong” — says the man who developed the strategy.

Only yesterday we mentioned that “smart beta” ETFs are how all the cool kids invest now. These ETFs essentially invest in an index… but make adjustments to outperform the index by, say, excluding stocks that had been super-volatile in the past couple of years.

Morningstar says assets under management in smart beta strategies have grown sixfold since 2008, to $616 billion — growth that parallels the explosion of ETFs.

The pioneer in smart beta is Rob Arnott, CEO of a firm called Research Affiliates.

Mr. Arnott now says smart beta has become so popular that its performance is bound to tank sooner or later.

“I thought the growth in smart beta was a good thing,” he’s quoted in today’s Financial Times. “Now when I see product proliferation in areas that I think are unwise and that are putting people at risk of performance chasing, that growth ceases to be a good thing.”

In other words, the strategy works only if a few people do it. If everyone tries to do it, it’ll backfire. A report from Arnott’s firm says the reason many smart beta strategies are outperforming these days is not the brilliance of the strategy… but simply that the underlying stocks have become more expensive.

“If you buy what has gone up just because it has gone up,” Arnott sums up, “you are buying for reasons that have nothing to do with valuations and run the risk of buying at the top of a bubble.”

At least Mr. Arnott has the decency to give retail investors a heads-up.

Don’t expect any such warning from the folks at Jane Street — described in today’s New York Times as “a secretive ETF trading firm that, after years of minting money in the shadows of Wall Street, is now pitching itself to some of the largest institutional investors in the world.”

Jane Street has also grown like a weed along with ETFs in recent years — its net worth multiplying fourfold since 2007, to more than $1 billion.

Its trading methods are so exotic that it hires “only a handful of new employees each year,” says the Times. “To survive, candidates have to ace brain-twisting math riddles and game theory tests.” Then they go through a one-month boot camp in which they master the firm’s proprietary computer program — if they don’t already know how to write code themselves.

It was Jane Street’s market makers who swooped in the morning of Aug. 24, 2015 —when the Dow plunged 1,100 points in five minutes and many ETFs experienced price drops completely out of line with their underlying indexes.

We mentioned one example yesterday — the Vanguard Consumer Staples ETF (VDC) cliff-diving 32% that morning while its underlying index fell only 9%. The move isn’t hard to spot on this one-year chart… 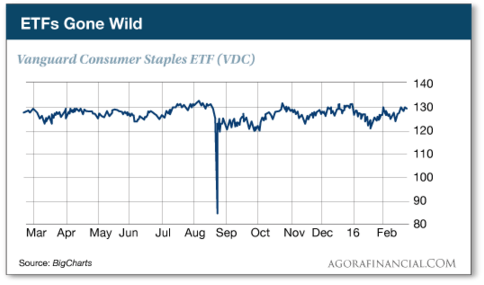 Jane Street’s math whizzes and computer programs spotted these mismatches. They bought with both hands and profited handsomely.

This is what Jane Street tries to pull off with ETFs every day. Most of the time, the mismatches aren’t so obvious. But they’re there. And the profits can be captured in the space of nanoseconds. Other market-making firms are catching on to these techniques — Cantor Fitzgerald, Knight Capital.

“As these firms have grown,” the Gray Lady goes on, “so has the demand for a new breed of Wall Street trader — one who can build financial models and write computer code but who also has the guts to spot a market anomaly and bet big with the firm’s capital.”

You might be familiar with the story: LTCM was run by Nobel Prize winners with flawless mathematical models. Unfortunately, they’d back-tested their models only 15 years and failed to account for the possibility the Russian government might default on its debt. When Russia defaulted, LTCM went down and nearly took the global financial system with it.

Is Jane Street subject to the same hubris?

Consider how nearly all of Wall Street is trying to do what Jane Street pioneered with the ETF trade. The Times story quotes a 31-year-old trading whiz hired in the New York office of the Japanese bank Mizuho. “There are so many moving parts; if just one thing goes wrong, you get killed.”

In other words, Wall Street now devotes thousands of Ph.D.s and terabytes of computer power to the market equivalent of picking up pennies in front of a steamroller.

How long can that go on before someone gets run over and we’re looking at another 1998 — only worse? That’s, in essence, the question David Stockman has been raising in this space for several days now.

ETFs have had a great run since the stock market rally began in 2009. “Every time an ETF started trading above the net asset value of the underlying stocks due to speculator buying,” David says, “fund providers issued new ETF shares to market makers. These market makers, in turn, bought up a basket of shares on the stock exchanges representing the asset mix of the fund. They then swapped them for the ETF shares.”

Now that the market has topped, what happens when that process starts to go into reverse?

What happens when Jane Street and its cohorts don’t swoop in to buy those underpriced ETF shares? What happens when a “doomsday loop” kicks in… when the market makers for ETFs are forced to dump the underlying stocks… dragging down the indexes… forcing still more selling?

The Financial Times and the New York Times seem to understand bits and pieces of this unfolding disaster. But they haven’t been able to put it all together. David Stockman, meanwhile, has been holed up for weeks at his place in Aspen, Colorado, figuring out how you can avoid getting steamrolled — indeed, how you can parlay the coming ETF meltdown into gains of up to 300% by this July.

In a little over 24 hours from now… live from Aspen… David will lead an online workshop where he’ll reveal the fruits of his research. It’s tomorrow at 7:00 p.m. EST. If you’re tied up tomorrow night, we’ll have a replay available to watch later.

It won’t cost you a thing to watch this live event. All we ask is that you send us your email address so we know how many people to expect and our computer servers don’t crash. Sign-up takes you only seconds — click here to secure your spot.