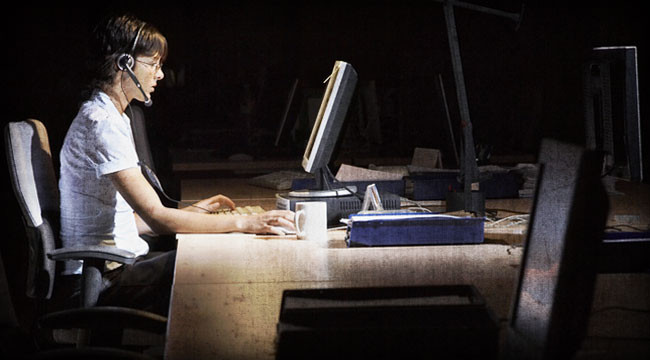 Shutdown: The Scariest Threat No One's Talking About

When it comes to “military technology,” the government shutdown matters.

Today, I’ll explain the danger to the country from what’s going on in Washington, D.C., and I have to emphasize the seriousness of what’s going on. While a collection of politicians — whose name may as well be Nero — fiddle along the Potomac, the country could burn. It comes back to that “Fifth Domain of War” issue that I’ve discussed.

First, understand that the government “shutdown” is political theater and a public relations spectacle. Forget about the merits — or lack thereof — of Obamacare with respect to health care coverage.

As you likely know, the House of Representatives is trying to “fund” the government while “defunding” Obamacare. The Senate and President Obama don’t want to play ball with that idea. So the federal budget for fiscal 2013 ran out on September 30, and there’s no 2014 budget in place. Shutdown.

Okay, it’s possible to fund most of the government and exempt other, specific things under the Constitution. Theoretically, Congress could fund all government operations except Obamacare, and then fight about the merits later. But no. We live in a politically polarized nation that requires periodic — increasingly, frequent — national spectacle and drama!

Consider the high profile act of closing a big strip of grass called the National Mall in Washington, or the concrete and granite World War II Memorial (see photo below). Oh, c’mon. The Obama administration has National Park Service employees standing around keeping people out, versus watching them if they go in. Ridiculous! 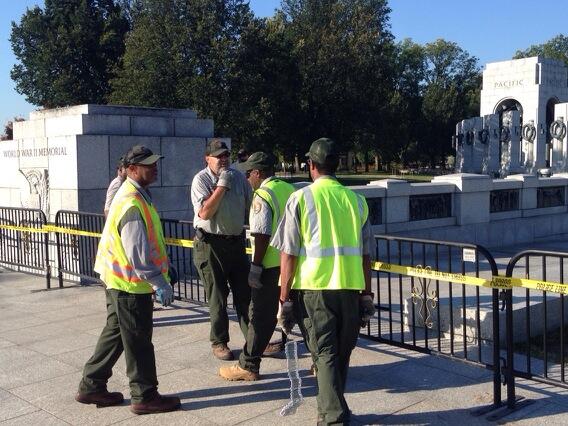 Too busy keeping you out to watch you if you go in!

Or consider passive-aggressive Department of Defense (DOD) bigwigs, who nearly cancelled the Navy-Air Force football game this past weekend. You must be kidding! A game like this is funded via ticket sales, media broadcast rights, merchandising, etc. Service academy football programs use NO congressionally-appropriated funds. But the “optics” are wrong, as one high-level Navy official explained.

What? We’re not investigating fatal air crashes? That’s a disgrace…

It’s not just collegiate sports. The troops are getting hosed, too. This week, the Pentagon locked out civilian staff of Armed Forces Network (AFN) at its broadcast center in Riverside, Cal. Usually, AFN re-transmits domestic television and radio programming worldwide. But for the time being, troops deployed overseas can’t watch Major League Baseball playoffs or National Football League games. So much for morale.

According to the Obama administration and its shutdown policy, the idea is to send home “nonessential” personnel while keeping “essential” people on the job. What’s that mean?

Well, every agency is different. But compare things to a Navy ship. The ship has a crew. According to manning guidelines, every billet on that ship is “essential” in some way or another. When the ship is deployed, everybody has a job. There’s the captain on the bridge, and other personnel all through the hull, down to the guy in the farthest reaches of the engine room. There’s something for everyone to do, all the time.

But when the ship is in port, you only need a skeleton crew. You just need people to guard access, answer the main phone line, keep an eye on the engines and electric power system, watch out for fires or leaks, perform necessary maintenance and inspections, etc.

…right now would be a perfect occasion for a hostile power or organization to staff up, pay overtime and start hacking away.

A ship in port is not at peak alert or operational status, right? Put another way, why do you think the Empire of Japan chose Sunday morning, Dec. 7, 1941 to attack the U.S. fleet at Pearl Harbor? Most people on those Navy battleships were asleep.

This Navy example is similar to what’s happening all through the federal government just now. Managers send people home and limit work assignments to minimal staff.

It can get bizarre, though. A few days ago, for example, a civilian jet aircraft crash-landed in Santa Monica, Cal., killing four people. But the National Transportation Safety Board (NTSB) is not investigating because staff are on furlough. What? We’re not investigating fatal air crashes? That’s a disgrace, in my view.

For another example from the defense arena, furloughs have reduced the number of DOD inspectors at United Technologies Corp., particularly at Sikorsky Helicopter division and at Pratt & Whitney engine division. The inspectors routinely sign off on all manner of parts and components through the manufacturing process. So without signoffs, Sikorsky and Pratt can’t continue to manufacture defense articles. Shutdown.

Along those lines, now consider that the feds have furloughed employees who work in cyber-defense. “Shutdown” or no, the nation still has extensive electronic infrastructure up and running. The NSA is still sucking your emails out of the ether, no doubt.

But all across our very big government and its alphabet soup of agencies — DOD, NSA, NRO, DOE, NASA, FBI, DEA, ICE, TSA, SEC, FCC, IRS and many, many more — information tech shops are shorthanded when it comes to cyber-security. This degrades our national ability to respond to cyber attacks. Indeed, we’re set up to take hits and long-standing ripple effects for cyber-security far into the future.

Consider that all manner of people both in the U.S. and across the world make daily efforts to break into countless computer systems, and hack away at whatever they find. Perhaps it’s financial crime, or raw espionage or a true “attack” to disable or wreck a particular system. It happens, and it happens All! The! Time!

But who’s guarding the electronic gates just now? I mean, on the best of days in the U.S., it’s fair to say that information security is under-staffed because it’s hard to find the right kind of people and pay them enough to do the job. Still, on a routine day when there’s an electronic intrusion alert, security-minded people jump onto the problem.

Now though, with the government shutdown, many of those people are sitting at home because they’re “nonessential” on some manager’s matrix board. So the reaction time has slowed, and the capability to remedy a cyber-breach is diminished. Yes, someone might hear the bell ring. But no, there are not enough firefighters to douse the flames, so to speak.

Come to think of it, right now would be a perfect occasion for a hostile power or organization to staff up, pay overtime and start hacking away. Our defense-mechanism is a skeleton crew of overworked players. It would be difficult for our government to raise an effective defense or response. That is, there are not enough people to hit the kill switch, and/or roll out patches.

What do I mean? Well, there’s the basic idea of bad guys hacking a system and data-mining it for all it’s worth. Or consider that now is the time to intrude and plant viruses that could trigger soon, or perhaps at some later date. Who’s there to stop the perps, right?

Eventually, the government shutdown will end. Then we’ll live with the effects of people (to include government employees and contractors) being away from their jobs for a while. It might be days, or it might be weeks. One way or the other, they’ll return to a backlog of work, which could lead to hasty efforts and possible oversight during the catch-up phase.

Or consider that compromised data might not come to light until long after the shutdown has run its course, during some future housekeeping or data audit. Compounding things, many intrusions happen in real time and if you don’t catch them as they occur, you may never know.

Meanwhile, the political fight continues in Washington, reflecting a badly divided and politically polarized country and culture. We’ve got factions out of power — conservative Republicans, moderate Republicans, Libertarians and certain Democrats — all vying against the “Progressive” faction that currently has its hands on the throttle. Our nation’s enemies must be smiling and rubbing their hands with glee.

P.S. The bottom line is that the government shutdown has immediate and direct effects on all manner of U.S. security issues, certainly cyber-security. The impact could be very harmful, and long-lasting. Thus if you haven’t yet read through my recent report on cyberwarfare, what some are calling the “Fifth Domain of War,” I urge you to do so now. You can gain access to it by signing up for The Daily Reckoning email edition, for FREE, right here.