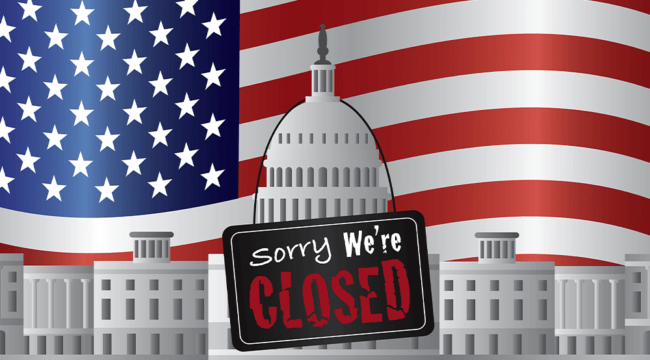 Should You Laugh or Cry?

Interest rates stay glued to the floor. And the Federal Reserve will continue inflating its balance sheet until…

“substantial further progress has been made toward the Committee’s maximum employment and price stability goals.”

We expect the Committee will be very busy for very long.

Jim Rickards estimates pre-pandemic growth rates will not return until “well into 2023.” And pre-pandemic unemployment levels until 2025.

Horses must still be traded.

Absent a deal by midnight tomorrow, Congress will need to authorize a short-term spending resolution — else the government shuts down.

Be not ye worried, however…

The Government Never Shuts Down

Federal workers essential to the Republic’s safety would remain on — the customs official at Ketchikan, Alaska, for example.

The Transportation Security Agency would still guard the aerial ways against infants, great-grandmothers and related hellcats.

Social Security checks would still go through the mails.

In event of national invasion… the Marines would answer the bugle.

The other pursues an identical strategy. But they come to terms by the fatal hour. Neither will agree to shutter the government.

The political combat before us is thus reduced to spectacle, a professional wrestling bout with its artificial blows and imitation blood.

The outcome is staged.

Estimates place the thing near $1 trillion.

They become mere abstractions at a certain point. They glaze the eyes. They stupefy.

Let us therefore reduce the airy abstract to solid concrete…

How To Imagine $1 Trillion

The nonprofit Employment Policies Institute places 1 trillion into this perspective:

But we are a financial newsletter. We are concerned with money. How much time is required to print $1 trillion?

You are exceptionally energetic. And so you print one $1 bill each second of each day, midnight to midnight, 365 days of the 365.

Again: How much time is required to print $1 trillion? Author Bill Bryson:

Consider another enormity — the national debt — presently running to $27.4 trillion.

Assuming the Almighty grants you your threescore and 10 — 70 years — you will require 12,412 lifetimes to retire the debt.

The numbers may daunt you. You may find your future bleak.

Yet consider the alternative: Would you prefer to spend those 868,848.52 years roasting in hell?

The Bible is quite clear. The unrighteous will not inherit the kingdom of God.

GDP contracted at a 34.2% annualized rate in 2020’s second quarter, during spring lockdown.

What number will Q1 2021 turn in? We do not know. Yet we expect another recession.

Meantime, the economy created 195,000 fewer jobs than economists predicted last month. And renewed lockdowns may throw millions from their jobs.

Yet all is joy on Wall Street. The stock market streaks to record heights. Why?

You have investors that seem to be able to look through the tsunami of negative economic data and earnings and toward the potential for a gradual reopening of the economy.

Yet a recent survey reveals half of all small-business owners do not expect to survive through 2021 — barring generous government assistance.

But assume only 25% sink under. Millions and millions of Americans would nonetheless go down in the undertow.

If 70% of the United States economy is consumption… these are millions and millions who will be consuming less.

Meantime, we are warned that a “biblical” flood of bankruptcies may wash over America in the months ahead.

Wall Street’s cheer squad will inform you that the stock market looks ahead…and “discounts the future.”

Yet the stock market is presently perhaps the most expensive ever.

A stock’s price-earnings (P/E) ratio indicates what investors will pay for each dollar of future earnings.

If a stock trades at 19 times earnings… investors are willing to ladle out $19 for $1 of earnings.

Stocks with P/E ratios beneath 16 are considered cheap…historically. Stocks above 18 are generally considered expensive.

What is today’s forward-looking P/E ratio for the S&P as a whole?

Near 24. That is, the S&P is extravagantly expensive by historical accounts.

It indicates a future economy under full steam. But the boilers are barely going at half blast.

Whence will all these corporate earnings originate? From the biblical flood of bankruptcies? From the millions and millions of jobless?

If the stock market discounts the future so reliably… it must believe the economy has a lovely trick up its shirtsleeve.

Either the stock market is correct — or the economy has no trick up its shirtsleeve.

We do not believe the trick is up the sleeve.

You know why the stock market is trading at record heights. You know it is not because of bright economic prospects.

You know it is largely because of the Federal Reserve and its gimmicks.

You also know it will likely end in grief… in time.