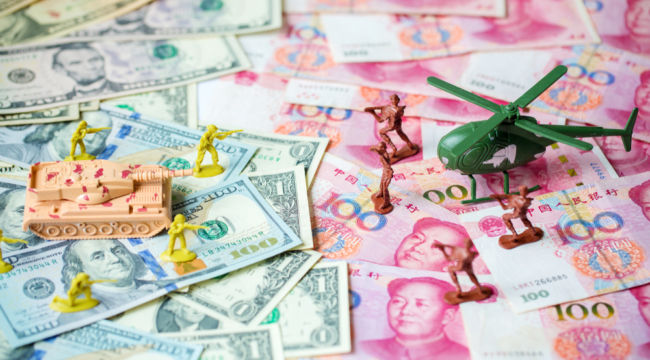 Shooting War With China More Likely Than You Think

The mainstream media narrative about the U.S.-China trade war implies that Trump is on a highly damaging ego trip and China holds all the cards.

The exact opposite is true.

Meanwhile, China has almost run out of room to impose tariffs. Further, they will invite retribution if they try to devalue their currency further.

China’s vulnerabilities run deeper than that.

The U.S.-China trade war comes in the aftermath of a Chinese Communist Party conference that made Xi Jinping dictator for life and enshrined his doctrines on the same level as Mao Zedong.

Once Xi got these powers, he proceeded on a disastrous policy course that has resulted in a slowdown of the Chinese economy, higher debt defaults, lost investment opportunities in the U.S. and declining hard currency reserves.

The knives are now out in Beijing.

Reports are circulating that Xi’s opponents are questioning his judgment and the wisdom of expanding his powers at such a critical time. Many are starting to blame Xi for the trade war almost as much as they blame Trump.

Xi still has torture, firing squads and concentration camps at his disposal, but the notion of a unified, coherent leadership structure in Beijing is now seen to be a myth.

Trump will keep up the pressure; he never backs off and always doubles down. It will be up to Xi to blink and acquiesce in many U.S. demands.

The U.S. will win this trade war because Xi does not want to lose his throne. Yet there will still be material damage to the global economy and lasting animosity between Xi and Trump.

But there’s more to the U.S.-China dispute than trade.

Yes, headlines and TV interviews are dominated by talk of the trade war. That escalating confrontation is a big deal, but it’s not the only flash point in U.S.-China relations, and not even the most important.

China dredged sand surrounding useless rocks and atolls in the South China Sea and converted them into artificial islands and then built out the islands to include naval ports, air force landing strips, anti-aircraft weapons and other defensive and offensive weapons systems.

Not only are the Chinese militarizing rocks, but they are trampling on competing claims by the Philippines, Vietnam, Brunei, Malaysia and other countries surrounding the sea.

China is claiming control based on ancient imperial arrangements and argues that the West and its South Asian allies “stole” the territory from them. The answer is that both the ancient claims and the theft narrative are open to dispute.

More to the point, the world has developed rules-based platforms for resolving these issues without military force. The U.S. is guaranteeing freedom of passage, freedom of the seas and the territorial rights of allies such as the Philippines.

Incidentally, I was at Norfolk naval base last week delivering a lecture on financial warfare with China. There was a “hurry up” feel to it, a definite sense of urgency. I got the impression that something must be up.

So far, the U.S.-Chinese confrontation has been about naval vessels passing in close quarters and surveillance aircraft being harassed by fighter jets. The risk of such tactics is an accidental collision, a rogue shot fired or a command misunderstood.

Any such incident could lead to retaliation, and there’s no telling where it might stop. Trump is not someone to back down, and Chinese leadership does not want to appear weak before the U.S.

That’s especially true at a time of great economic uncertainty. Communist Party leadership is desperate to maintain the support of the people, or else it risks losing the “mandate of heaven.”

China does not want war at this time. But diverting the people’s attention away from domestic problems toward a foreign foe is an old trick leaders use to unite the people in times of uncertainty. Rallying the people around the flag is a tried and true method to garner support.

If China’s leadership decides that the risk of losing legitimacy at home outweighs the risk of conflict with the United States, the likelihood of war rises dramatically.

I’m not predicting it, but wars have started over less.

As Mick Jagger sang, a U.S.-China war is “just a shot away.”