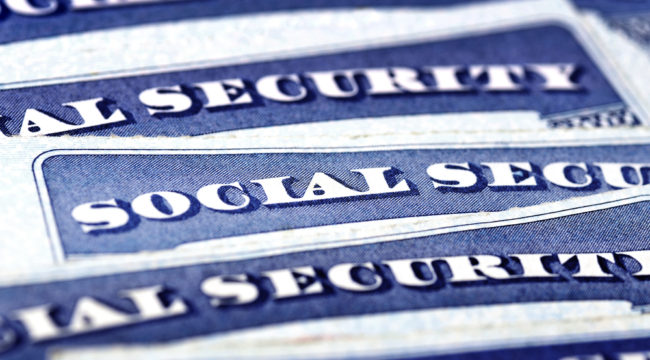 The 2017 Social Security Cost of Living Adjustment is going to be a paltry 0.3%. That’s about $5 per month.

That’s far less than the current inflation rate of 1.5%, which is expected to move even higher.

Plus, Medicare premiums are set to jump as high as 22% next year for many seniors.

In short, Social Security recipients are getting the shaft.

But that’s just the tip of the iceberg.

Things get really scary when you start digging into the numbers…

The System Is Bust

For years, the political establishment has been telling us that Social Security is doing gangbusters—it’s awesome!

But propaganda spins nonetheless. Here’s what Democrat Senator Harry Reid said on “Meet the Press” in 2011:

My most charitable reaction to that statement is to say Harry’s full of crap.

The “fully funded” lie is floated because the Social Security “trust fund” is supposed to have roughly $2.7 trillion to pay out as benefits.

But there is no cash in the Social Security trust fund. There never has been.

Here’s the best description of the “trust fund” scheme by David C. John of The Heritage Foundation:

“In short, the Social Security trust fund is really only an accounting mechanism. The trust fund shows how much the government has borrowed from Social Security, but it does not provide any way to finance future benefits. The money to repay the IOUs will have to come from taxes that are being used today to pay for other government programs.

For that reason, the most important date for Social Security is 2018, when taxpayers must begin to repay the IOUs, not 2042, when the trust fund is exhausted.”

The bottom line is there’s no chance that the government is going to be able to honor its existing Social Security commitments without radically raising taxes or drastically reducing benefits… and soon.

The most likely outcome is a combination of both.

The End of Retirement?

If you’re in your 60s, you’re looking at a reduction in Social Security benefits.

If you’re in your 40s or 50s, you’re looking at big benefits cuts and much higher taxes.

If you’re younger than that, well, who’s kidding who, you won’t get anything.

Look, Social Security’s reckoning day is coming no matter the carping and whining. The math no longer works.

The program pays out roughly $70 billion more than it takes in each year. And that shortfall is only going to get worse as more baby boomers retire.

If you think politicians will somehow magically fix Social Security without benefit cuts and tax increases, you’re living in a fantasyland.

Those charlatans still out there telling you it’s a viable program? That’s just the story they need to tell to ensure their own political power.

They can’t tell you the truth and remain in office. And they know most people are intravenously connected to the Matrix already—so sweet nothings on the end of a boot work well.

The truth is you can’t rely on anyone but yourself to prepare for a comfortable retirement. And the safest, most profitable way to do that is if you’re simply following the trend.

What I Told My Dad About Social Security

I was asked a GREAT question at the Paradigm Shift Summit, and I wanted to dive a bit deeper and share the answer with you!