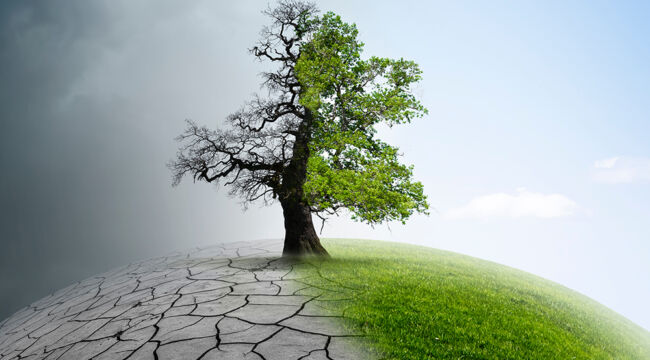 The latest climate shakedown — sorry, the last climate conference — COP27, has wrapped up in Egypt.

In a “historic moment,” participants agreed to implement a new funding mechanism to compensate countries most affected by “climate change.”

Basically, we’re talking about climate reparations. Of course they all want the U.S. to pay for them.

Like I said, it’s just a shakedown disguised as a climate conference. It’s ludicrous to try and blame the weather somewhere in the world on the U.S.

When you get down to it, climate change alarmism is a scam. It’s a manufactured crisis pushed by people with a lot of money and a strong desire to control other people.

Yes, the climate does change. It always has and always will, which has nothing to do with carbon dioxide emissions. But the threats of “existential crisis” and “we’ll all be underwater in ten years” are nonsense.

Garbage In, Garbage Out

The climate change models that the alarmists use are garbage. I’ve studied them and understand the math and complex dynamics and I know why they’re junk. They can’t even backtest reliably let alone forecast. They’re often wrong by orders of magnitude.

If you used a financial analyst whose market predictions were wildly wrong year after year, why would you continue to use him? Obviously, his models are way off.

It’s the same with the climate alarmists. The models they rely on have been completely discredited, but they continue to use them.

That just shows you that their agenda isn’t about science, but power.

They’re obsessed with wind and solar power generation. They can work, but they’re unreliable and intermittent. They can’t maintain the baseload power to keep a modern power grid up and running.

I actually own the largest off-grid non-commercial solar field in New England, so I know what I’m talking about. It works fine, but you can’t run cities with it.

Wind power brings its own unique problems, many of which are environmentally destructive.

Think of all the trees that have to be cut down in many areas just to add one wind farm. Trees absorb carbon dioxide, so if you were serious about decreasing CO2 emissions, you’d be planting trees instead of tearing them down.

Plus, the machinery you need to produce and transport these turbines runs on fossil fuels. The same goes for the equipment needed to maintain them. So, if you want wind power, you’d better have a thriving fossil fuel industry.

Not to mention that these wind turbines are known as bird killers. It’s estimated that roughly 680,000 birds are killed by wind turbines in the U.S. each year. Some estimates place that figure at over one million.

So, you have to ask yourself: just how environmentally friendly is wind power?

Still, the push for wind power persists, as climate alarmism persists. What stops them is a head-on crash with reality. That’s actually happening now.

Germany doesn’t have enough natural gas or oil distillates (diesel, gasoline) to make it through the winter. They’ll have to force people to lower thermostats dramatically and shut down manufacturing.

Siemens and other major German companies are shutting down wind turbine manufacturing and outsourcing it to lower-cost jurisdictions such as China.

That’s how the climate alarm nonsense ends. When you put it under stress, the shortcomings and false claims are quickly revealed. It’s too bad it’s taking a war and an energy crisis to reveal the phony climate alarm narrative.

Still, some lessons are being learned. That’s progress. Still, you need to realize who’s behind all the climate alarmism. If your answer is “globalist elites,” you win the prize.

Readers have seen me criticize these “elites” for years. When I do so, I’m careful to say that there isn’t necessarily a deep dark conspiracy theory at work. You don’t need a conspiracy theory.

If the monetary institutions and transnational organizations are run by a group of like-minded individuals, then they will coordinate their actions and act in concert without direction from a single force. They certainly don’t think they’re engaging in conspiracy theories; they just think they’re coordinating policy.

If you dig, you’ll find that they all went to a small number of schools (MIT, Harvard, Cambridge, the London School of Economics, University of Chicago, Stanford, and a few others). They all worked at the same institutions or think tanks. So, it’s a club.

As Ken Kesey wrote, “You’re either on the bus …  or off the bus.” These elites are definitely on the bus.

They all support globalist ideas like open borders, world government, world money and of course, climate alarmism. What I’ve had trouble understanding is, why would they be united in supporting bad ideas?

I’m not just talking about bad ideas, but non-feasible ideas that defy the laws of physics, morality, history and common sense.

The elite agenda goes back decades, even much further. It is anti-human. These people believe humans are the problem, not the solution and that it wouldn’t be a bad idea if the human population was reduced by several billion people. Some believe it would be great if humans died out entirely.

If you want to destroy or enslave humanity, the elite agenda makes complete sense. It’s evil but real. Again, that might sound like a conspiracy, but it really isn’t. It’s just pursuing policies based on a shared belief system.

The simple fact is, these elites don’t like people very much. They love humanity, just not people.