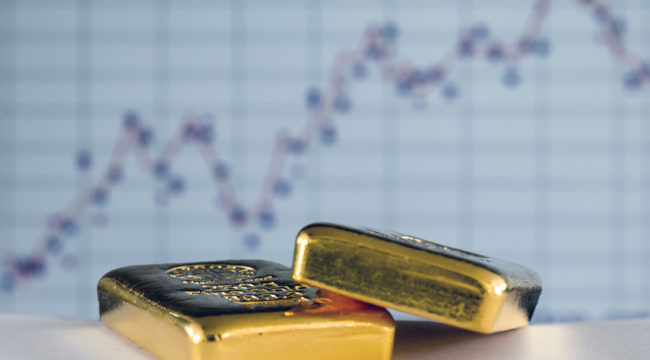 But is China about to provide the catalyst to send gold even higher? And by how much?

Today, we fare forth in the spirit of speculation… follow facts down strange roads… and arrive at a destination stranger still…

According to the Nikkei Asian Review, China has plans to buy imported oil with yuan instead of dollars.

Exporters could then exchange that yuan for gold on the Shanghai Gold Exchange.

Not only would the plan bypass the dollar entirely… it would restore gold’s role in international commerce for the first time since 1971, when Nixon hammered the last nail through Bretton Woods.

If the rumors hold true, China’s plan could enter effect by the end of this year.

It turned up a basic math problem that spells drastically higher gold prices — if the plan is to work.

By 1970, it was evident to those running the U.S. that it would very soon be necessary to import large quantities of oil from Saudi Arabia. Under the Bretton Woods Agreements of 1945, the immense quantities of dollars that would shortly flow to Saudi Arabia in payment of their oil would be claims upon U.S. gold, at the time quoted at $35 an ounce. Those claims would surely deplete the remaining gold held by the U.S. Treasury in short order.

Washington found itself on the sharp hooks of a dilemma…

Dramatically raise the price of gold to limit redemptions — and devalue the dollar in the process — or repudiate its commitments under Bretton Woods.

Dishonor, that is… or dishonor.

To continue under the Bretton Woods monetary system would have meant that the U.S. would have been forced to raise the price of gold to an enormous figure in order to reduce the amount of gold payable to the Saudis to a tolerable level. But raising the dollar price of gold in that manner would have constituted a great devaluation of the dollar and collapsed its international prestige; that in turn would have ended the predominance of the U.S. as the No. 1 power in the world. The U.S. was not willing to accept that outcome. So Nixon “closed the gold window” on Aug. 15, 1971.

If China is willing to trade gold for oil under its latest plan, a similar dynamic enters play.

China takes aboard some 8 million barrels of oil a day.

But China holds only a few thousand metric tons of gold (officially about 1,850. Some estimate the true figure much higher).

You see the problem, of course.

China rapidly depletes its gold reserves if too many oil exporters choose to exchange yuan for gold.

If the plan’s to be sustainable at all, gold must rise — drastically — in order to balance the vast amounts of oil it’s supporting.

As Price explains, “To balance the mass of oil received by China against a limited amount of available gold… it will be necessary for gold to skyrocket upward in yuan terms and, necessarily, in dollar terms as well.”

Only a drastically higher gold price would render the plan plausible.

How far would gold have to climb before the relationship was stable in Price’s estimate?

We don’t know if Price’s figure is correct.

But if not $13,000, it seems gold would have to rise dramatically if Price’s thesis is correct — or else China’s plan collapses.

We can only conclude that China knows the implications of the math.

$13,000 gold also means a massive devaluation of the yuan.

China prefers a weak yuan to goose exports. But a worthless yuan?

The plan may prove a mirage in the end for all we know.

But if the plan does proceed… Jim Rickards’ $10,000 gold prediction might be vindicated — fully and then some.