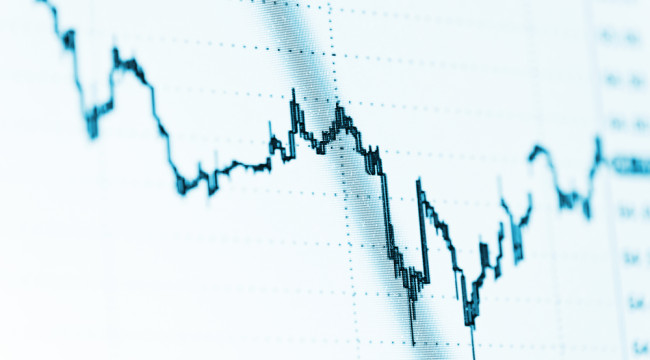 Mr. Lew is winging his way to Shanghai… where finance ministers and central bankers from the so-called “Group of 20” nations will meet starting Friday.

As our own Jim Rickards reminds us now and then, the G-20 is the closest thing to world government the global elites have got right now. Ever since the 2008 financial crisis, the G-20 is where Big Decisions™ get made.

But not this time, it would seem. In an interview on Bloomberg TV, Lew “downplayed expectations for an emergency response to global market turbulence,” says the Bloomberg website’s thumbnail summary.

“This is not a moment of crisis,” Lew said. “This is a moment where you’ve got real economies doing better than markets think in some cases.”

Coincidentally or not, the major U.S. stock indexes are tanking again this morning.

And if it’s a sign of impending crisis you’re looking for, you can find it this morning in the U.S. services sector.

For the last six months, while U.S. manufacturing has been in a funk, the no-crisis crowd has assured us everything’s still OK because, well, we don’t manufacture that much anymore.

We’re a services-oriented economy nowadays, they say. As long as Americans keep waitresses and busboys busy by eating out, and as long as they keep buying consumer-y junk delivered by guys driving 18-wheelers, we’ll be fine!

Yeah, not so much. Markit is out this morning with its “flash PMI” indicating the health of the services sector so far in February. As with the manufacturing numbers, 50 is the dividing line between expansion and contraction. The number is 49.8 — way off the “expert consensus” among dozens of economists polled by Bloomberg, whose average guess was 53.7.

It’s the lowest reading since the “partial government shutdown” in October 2013. Econoday’s summary of the report says it “could be a chilling indication of trouble ahead.”

But wait, there’s more! The no-crisis crowd also likes to point to the health of the housing market.

This morning, however, the Commerce Department said sales of new homes tumbled 9.2% from December to January. This too was way off the “expert consensus.” Sales in the West look especially weak, down 32%.

Builders are slashing prices to clear inventory; the median price for new construction is down 4.5% from a year ago, to $278,000.

“The bear will soon be arriving in earnest, marauding through the canyons of Wall Street while red in tooth and claw,” David Stockman wrote this week in his Contra Corner e-letter.

“Our monetary central planners, of course, will once again — for the third time this century — be utterly shocked and unprepared. That’s because they have spent the better part of two decades deforming, distorting, denuding and destroying what were once serviceably free financial markets.”

Sure, they can pump up stock prices for a while. But they get tied up in the delusion of the “wealth effect” — the idea that people will see their portfolios growing and decide to go buy a new car with 0% financing.

“According to these pettifoggers,” says David, “production, income and profits catch up with the levitated prices of financial assets. Accordingly, there are no bubbles; and, instead, societal wealth continues to rise happily ever after.

And this time, David believes the crash will be accelerated by the biggest Wall Street “innovation” of the 21st century — the exchange-traded fund.

“During the 2000 dot-com crash,” says David, “ETFs barely existed and were immaterial to the broad market. The net asset value of the few dozen ETFs at the end of 1999, in fact, was just $60 billion. 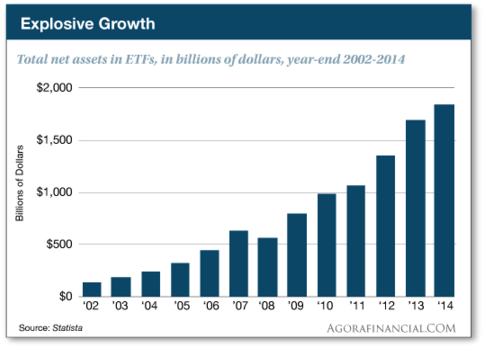 And David’s convinced it will end in tears — for reasons we’ve laid out over the last week.

We won’t rehash those reasons today. We’ll merely remind you David is leading a live online workshop tonight at 7:00 p.m. EST. He’ll show you not only how to steer clear of the coming carnage; he’ll identify a way you could seize on the panic to quadruple your money by July.

We’ll also remind you of David’s stellar track record since he teamed up with Agora Financial last fall. The average closed position grew 88% in 67 days. That includes one play exploiting early cracks in the ETF sector for a 54% gain only two weeks.

Again, David’s hosting this event tonight at 7:00 p.m. EST. It won’t cost you a thing to look in. Just RSVP at this link with your email address and we’ll save you a spot.