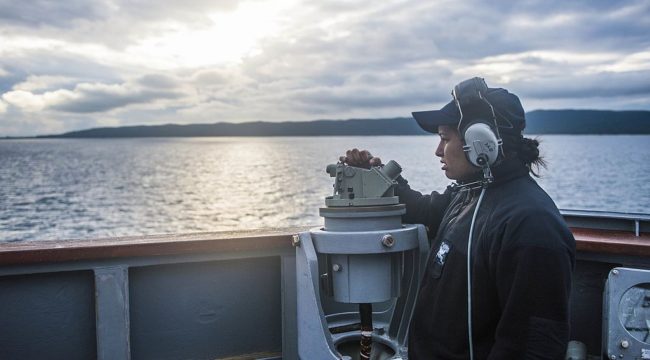 The guided missile destroyer USS John McCain collided with a commercial tanker near Singapore early Monday morning. 10 sailors lost their lives, and several others were injured.

The incident bears eerie resemblance to another collision involving a navy ship that took place two months ago. Early on June 17, the USS Fitzgerald, a ship identical to the McCain, collided with a commercial container ship off the coast of Japan. Seven Fitzgerald sailors were killed in that incident.

This is either a remarkable coincidence, or something else is happening that’s causing these incidents. Jim Rickards explored one possibility above.

Regardless, these collisions are the latest in a spate of maritime accidents that illustrate the need for new technological advancements in the field of nautical navigation. 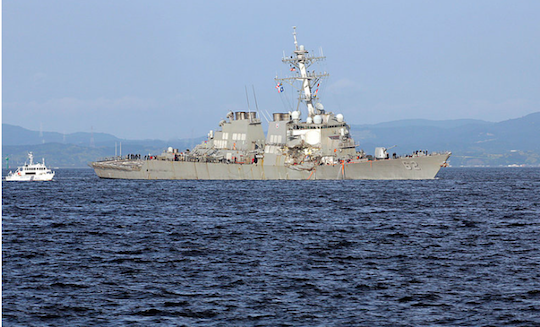 The Fitzgerald after its collision with the container ship ACX Crystal off the coast of Yokosuka, Japan. Source: Eugene Hoshiko/Associated Press

Another high-profile collision in 2012 included damage to the USS Fitzgerald’s sister destroyer, the USS Porter, in the Strait of Hormuz. Luckily no one was injured in that incident.

As with most at-sea ship accidents, improper vessel navigation was at least partially to blame for both of these tragedies.

Both of these systems rely upon a network of satellites to triangulate the position of objects on earth. The satellites transmit coded signals to an earthbound receiver, which then converts received signal information into estimates of position and velocity.

If you’ve used google maps, then you know that the GNSS technology is certainly amazing. But when it comes to something as critical and delicate as military nautical navigation, however, GNSS certainly has its limitations.

While the United States Armed Forces currently rely heavily on the GNSS for their navigation processes, this technology is plagued by troubling inaccuracies and unreliability.

GNSS is also susceptible to acts of sabotage by American adversaries. In addition to hacking concerns, GNSS access can be readily blocked by methods such as jamming.

The head of the Army’s Communications-Electronics Research, Development and Engineering Center (CERDEC) summed it up best when he said that the department was “very concerned about what happens when we lose GPS.”

In addition to these and other issues of accuracy and reliability, GNSS often experiences restrictions or failure due to regional topography and geographical formations. For example, military operatives work in many environments (underwater, underground and under dense foliage) that preclude effective GNSS reception.

Because a GNSS receiver must lock onto the signal from at least four satellites in order to triangulate an approximate position, connections that are lost through physical obstructions present real problems.

Other issues associated with GNSS navigation include signal degradation or interruption from radio frequency interference or solar storms, and effects from satellite movement that distort the signal.

There are other technical issues, but this isn’t that forum to wade too deep into the technical weeds.

Suffice it to say that the current system has limitations that need to be improved. Fortunately, that’s being explored.

What are called modern adaptable navigation systems (ANS) technological methods promise to eliminate current problems by enabling high-precision navigation without depending on external fixes for prolonged periods of time.

In an effort to reduce reliance on GNSS in challenging environments, the United States Defense Advanced Research Projects Agency (DARPA) has launched a number of initiatives to develop ANS technology.

DARPA is also developing technology that finds ways to utilize non-navigation signals from sources like telecommunication towers and natural phenomena such as lightning.

This technology has the potential to offer far greater accuracy than even the most state-of-the-art GNSS platforms.

The organization has also employed methods to reduce the size, weight and power consumption as well as the cost of navigation system sensors. According to DARPA, the overarching goal of ANS is to provide precise positioning, navigation and timing (PNT) “everywhere and always.”

Again, there’s no need to be overly technical here, but the point is that there are ways to make navigation methods more reliable and secure.

And DARPA is pursuing them.

In short, ANS technology is poised to overcome GNSS shortcomings to offer secure, consistent and dependable navigation processes that will enable service personnel to do their jobs with greater accuracy. It will also allow for the better avoiding of mishaps and tragedies such as the recent USS McCain and Fitzgerald collisions.

But here’s something else to consider:

Most of the issues that affect GNSS navigation for military applications are also problematic for future use in the commercial sector.

Think about all the times that you’ve lost GPS reception while inside buildings, going through tunnels and at the bottom of “urban canyons” (those relatively narrow city streets that are flanked by large buildings on both sides).

Like most military-driven technology, it is only a matter of time before ANS navigation processes and infrastructure make their way into the commercial sphere. Private companies are already following ANS development quite closely and anxiously awaiting the moment that they can bring these exciting digital navigation innovations to general consumers.