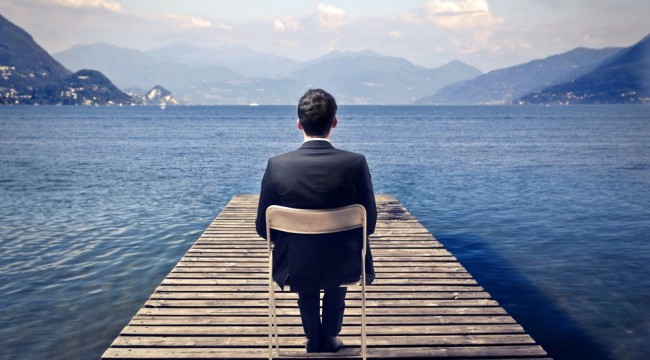 I was at lunch with a friend of mine and we were talking about the big vote in Scotland. (As I write, the vote is not yet in.)

And then my friend offered up a reason why many people would vote yes. “They’re bored! They just want something to happen.”

Below, then, is a tongue-in-cheek exploration of my theory of boredom.

In the financial markets, people often wind up sabotaging their own portfolios out of sheer boredom.

Well, not the concept, but the word bore first appeared in the English language in print in that year. So says my copy of The Oxford English Dictionary. (And yes, I have the physical copy — all 20 volumes!) The OED defines the word bore in this way: “To be weary by tedious conversation or simply by the failure to be interesting.”

Funnily enough, the first usage appeared in a letter by an Englishman to a fellow Englishman complaining about the French. “I pity my Newmarket friends who are to be bored by these Frenchmen.” Classic.

Author Tom Hodgkinson would agree with Dickens. In his The Freedom Manifesto, he devotes a whole chapter to boredom. He writes:

“If contemporary science were more sophisticated and subtle, then I’m absolutely certain that it would rank boredom as one of the central killers in the modern world… It would not surprise me one jot if boredom were one day revealed to be a carcinogenic.”

Read in the proper lighthearted spirit, Hodgkinson’s book is terrific. He talks about all the ways in which modern life creates boredom — especially in the workplace. Mechanical, boring jobs “require just enough concentration to prevent you from going off into a dream but not enough really to occupy your mind.”

As a result, we have boredom on a mass scale. People are bored. And they do all kinds of things to alleviate the boredom. They act like idiots. They dress like fools. Anything to kill the boredom. They may even commit acts of sabotage.

In the financial markets, people often wind up sabotaging their own portfolios out of sheer boredom. Why else put money into tiny 70 cent share “mining” companies that have virtually no chance of being anything at all? Why bother chasing hyped-up biotech companies that trade at absurd levels based on flimsy prospects?

Because people are bored! It seems exciting to lose your money in this way. It’s no different than going to a casino. (And just like in a casino, these bets pay off often enough to keep people coming back.)

Why do people buy and sell stocks so frequently? Why can’t they just buy a stock and hold it for at least a year? Why can’t people follow the more time-tested ways to wealth? I’m sure you can guess my answer by now.

I think people often do dumb things with their portfolio just because they’re bored. They feel they have to do something. (Here I recall that bit of wisdom from Pascal: “All men’s miseries derive from not being able to sit in a quiet room alone.”)

I know I get bored, but in a different way. For example, it’s incredible to me that people spend so much time talking about the Federal Reserve. My newsletter peers, people in the media. It’s unbelievable. Don’t these people get bored? Or do they do this because they’re bored?

I’m so bored with the Federal Reserve. I know it was in the news this week with another pronouncement on interest rates. Boring. And thankfully, it is largely irrelevant to you as an investor. Warren Buffett himself once said, “If Fed Chairman Alan Greenspan were to whisper to me what his monetary policy was going to be over the next two years, it wouldn’t change one thing I do.”

This is part of the reason why I travel. That way I don’t have to write about what the Fed said this week or go over some garbled macro scenario I drew up in my head. (“Let me tell you about Zero G-Day, Oil Doom, 13-X… You see, very few people know about this secret government document, but you could make blah, blah, blah…”)

Instead, I can write about what I see… in Greece, hopefully overlooking stunning cliffs and deep-blue water. Ha. Or in Germany, sitting at a long wooden table under oak trees drinking beer at a thousand-year-old brewery. Not boring!

Today, the market seems bored with just about anything that isn’t tech, biotech, social media or Tesla.

In fact, taking advantage of the noise is a simple arbitrage. Sometimes you’ll hear (smart) people talk about “time arbitrage.” The idea is just that most investors have a hard time looking out even just a year or two. They focus on now. And so, the idea goes, all you have to do is think out a year and you can pick up stocks that are cheap today because others can’t look beyond the current quarter or two or three.

I think the same kind of arbitrage exists with boredom. People get bored holding the same stock for a long time — especially if it doesn’t do much. They see other shiny stocks zipping by them and can’t stand it. So they chase whatever is moving and get into trouble.

As the famed money manager Ralph Wanger used to say, investors tend to like to “buy more lobsters as the price goes up.” Weird, since you probably don’t exhibit this behavior otherwise. You usually look for a deal when it comes to gasoline or washing machines or cars. And you don’t sell your house or golf clubs or sneakers because someone offers less than what you paid.

Speaking of Wanger, he wrote an investment book called A Zebra in Lion Country, published in 1997. It’s an entertaining read, and I recommend it. In it, he gets to the boredom arbitrage:

“Usually, the market pays what you might call an entertainment tax, a premium, for stocks with an exciting story. So boring stocks sell at a discount. Buy enough of them and you can cover your losses in high-tech.”

That was in 1997, before the 2000 bubble popped. Good advice from Wanger, as usual. (I met him once in his office in Chicago, in 2005. He was generous with his time and spent almost two hours with me, just sharing his wisdom.) Today, the market seems bored with just about anything that isn’t tech, biotech, social media or Tesla.

Anyway, if you can find ways to fight boredom and not take it out on your portfolio, I think your returns will benefit.

In any event, I hope I wasn’t boring today.

Have a great weekend… and don’t get bored,

Ed. Note: Staving off boredom can be a difficult thing to do as an investor. But as Chris points out, knowing when to stay put is just as important as knowing when to buy and sell. Filter out the noise and keep a level head. Sign up for The Daily Reckoning email edition, for FREE, and you’ll read about other great investment insights you won’t find anywhere else.