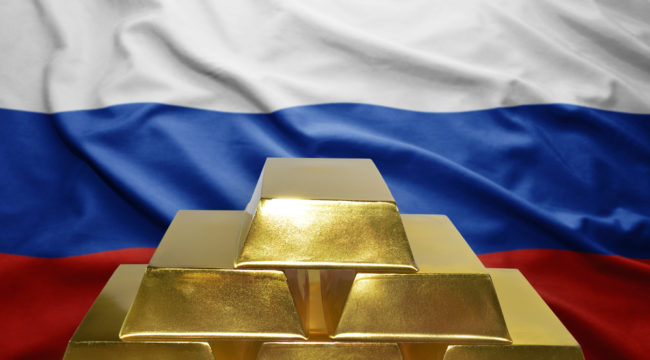 The Only Russia Story That Matters

The World Gold Council has reported that the Central Bank of Russia has more than doubled the pace of its gold purchases, bringing its reserves to the highest level since Putin took power 17 years ago.

Russia’s desire to break away from the hegemony of the U.S. dollar and the dollar payment system is well-known. Over 60% of global reserves and 80% of global payments are in dollars. The U.S. is the only country with veto power at the International Monetary Fund, the global lender of last resort.

Perhaps Russia’s most aggressive weapon in its war on dollars is gold. The first line of defense is to acquire physical gold, which cannot be frozen out of the international payments system or hacked.

With gold, you can always pay another country just by putting the gold on an airplane and shipping it to the counterparty. This is the 21st-century equivalent of how J.P. Morgan settled payments in gold by ship or railroad in the early 20th century.

Russia has now tripled its gold reserves from around 600 tonnes to 1,800 tonnes over the past 10 years and shows no signs of slowing down. Even when oil prices and Russian reserves were collapsing in 2015, Russia continued to acquire gold.

But Russia is pursuing other dollar alternatives besides gold.

For one, it’s been building nondollar payments systems with regional trading partners and China.

The U.S. uses its influence at SWIFT, the central nervous system of global money transfer message traffic, to cut off nations it considers to be threats.

From a financial perspective, this is like cutting off oxygen to a patient in the intensive care unit. Russia understands its vulnerability to U.S. domination and wants to reduce that vulnerability.

Now Russia has created an alternative to SWIFT.

The head of Russia’s central bank, Elvira Nabiullina, has reported to Vladimir Putin that “There was the threat of being shut out of SWIFT. We updated our transaction system, and if anything happens, all SWIFT-format operations will continue to work. We created an analogous system.”

Russia is also part of a reported Chinese plan to install a new international monetary order that excludes U.S. dollars. Under that plan, China could buy Russian oil with yuan and Russia could then exchange that yuan for gold on the Shanghai exchange.

Now it appears Russia has another weapon in its anti-dollar arsenal.

Russia’s development bank, VEB, and several Russian state ministries are reportedly teaming up to develop blockchain technology. They want to create a fully encrypted, distributed, inexpensive payments system that does not rely on Western banks, SWIFT or the U.S. to move money around.

This has nothing to do with bitcoin, which is just another digital token. The blockchain technology (now often referred to as distributed ledger technology, or DLT) is a platform that can facilitate a wide variety of transfers — possibly including a new Russian-state cryptocurrency backed by gold.

The ultimate loser here will be the dollar. That’s one more reason for investors to allocate part of their portfolios to assets such as gold.