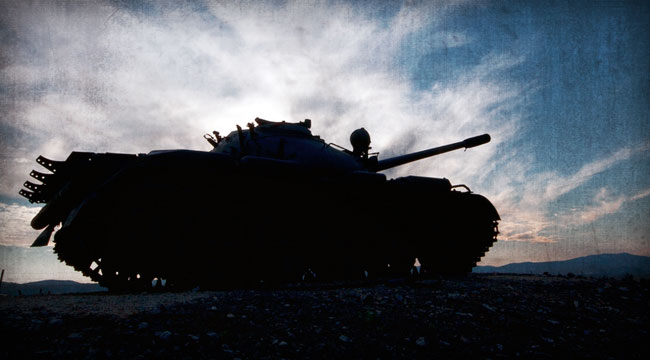 Russia Has Already "Won" in Ukraine

I spent much of last week in Houston at a major energy conference. I spent most of this week up in Toronto at the annual convention of the Prospectors & Developers Association of Canada (PDAC), the world’s largest mining conference.

Along the way, I followed news and spoke with knowledgeable people about Russia and its political-military moves toward Ukraine. I won’t drop names, but the other night I had dinner with a former Canadian ambassador to Russia; and that was after spending an entire afternoon talking with members of the Canadian diplomatic corps who deal extensively with NATO, Russia and nations of the former Soviet Union (FSU).

What does the Russia-Ukraine situation mean to you as an investor? More bluntly, can you make any money here?

First, let’s be candid. Let’s acknowledge something, and it’s critical. That is, with President Putin setting strategy, Russia is rapidly succeeding in its immediate goal of hobbling Ukraine and taking back Crimea.

That is, there is a situation on the ground in Ukraine-Crimea that favors Russia. This situation will not be reversed by any actions from the U.S., NATO or any other power (well, not for a generation or two, if then).

I won’t go deep into discourse, except to say that Russia sometimes produces more history than it can consume. Since the 1700s, Russia has regarded Crimea as critical to its national security. In the days of the Soviet Union, Crimea was a key region for building and projecting naval power.

Geographically, nothing has changed over time. From Russia’s perspective, the past 22 years — with Crimea as part of an economically moribund post-Soviet Ukraine — are an historical anomaly. This situation is rapidly ending.

From the Western perspective, the unfolding Russia-Ukraine-Crimea episode is a battle, so to speak, that the U.S. and NATO have already lost. All the political chest-thumping, sanctions, visa restrictions, etc., in the world won’t make any difference to the correlation of forces. Russia’s troops are where they are, and they aren’t leaving.

Sadly — because I really shouldn’t have to explain this — I’ll note an obvious point, but one that’s apparently lost on many senior politicians in the U.S. and elsewhere. In short, Ukraine-Crimea is not a battle that the U.S. or NATO ever should have pretended to join. We’re dealing with geography that’s at the heart of Russia’s “near abroad” and vital to Russia’s national defense. So it’s accurate to say that Ukraine-Crimea is a point of supreme national interest to Russia. Get it? Hey, some people don’t.

…is the West willing to risk losing London or New York over which apparatchik is the mayor of Sevastopol?

Putin and his generals now have “boots on the ground,” with or without Russian insignia on the uniforms. (It’s most likely that soldiers you see on television are Russian special forces — spetsnaz. Plus, Russia has likely organized local militias, under Russian military control. It’s characteristic.)

Here’s the rub. There’s nothing that anyone in Ukraine, the EU, NATO and/or the U.S. can do about Crimea, and probably eastern Ukraine, as this unfolds. Not unless Western political players want to send in tanks and troops, which would doubtless escalate into something very bad, and certainly much worse than what we see. Really, the Russians don’t fool around, let alone back down, on issues like this. They’ll fight.

The quick, determinative lesson in all of this is that hard power trumps soft power every time. Or as a wise old admiral once told me, “Gunboat diplomacy without the gunboats is just small talk.”

Another lesson in all of this is that unfavorable geopolitical events do not just happen out of the blue. This current standoff — and this Western “loss,” if you’re keeping score — has been many years in the making. Russia is responding to two decades of strategic insult and political fecklessness by the West, going back to ridiculous U.S./NATO missteps immediately following the demise of the Soviet Union.

For example, NATO was a post-World War II military alliance created to contain the then-expansionist, aggressive Soviet Union. Yet when the USSR imploded in 1991, NATO remained intact; kept its name; perpetuated its bureaucracy; and, organizationally, expanded eastward to the borders of Russia (think of Latvia, Estonia and Lithuania). From the Russian perspective, it was as if Napoleon were assembling another Grande Armee.

Later, during the first decade of the 2000s, NATO even worked to add Georgia and Ukraine to the ranks. This was utterly intolerable from Russia’s strategic perspective and led to the Russia-Georgia war of August 2008. That short conflict should have been instructive, but apparently, some people just don’t learn.

More recently, the idea of Ukraine as part of NATO has proven to be, basically, the equivalent of Soviet missiles in Cuba in 1962. It’s a casus belli to Russia, clearly, because Russia has moved troops to quell the problem.

Finally, consider that Russia is doing what it’s doing because the West (and certainly the U.S.) has failed to remain militarily pre-eminent in the world. Hold this last thought, because I’ll address it in a moment.

The West — as embodied by its blustering, incompetent, impotent politicians — cannot undo what’s happening in Ukraine-Crimea. Events will unfold in their own way. Russia controls the course of things; it’s “running the table,” so to speak.

Meanwhile, there’s NO vital U.S. national interest in the region. Zero! And certainly, there’s nothing worth going to war over with Russia. And just so you know, Russian war-fighting doctrine has a low threshold for using nuclear weapons. So is the West willing to risk losing London or New York over which apparatchik is the mayor of Sevastopol?

U.S. national leadership… looks like a ship of fools.

In one way or another, the Ukraine situation will resolve. Crimea will likely revert to Russia. Part of eastern Ukraine might also affiliate with Russia.

When the territorial transfers are completed, perhaps Russia will come to a meeting somewhere. The Russian diplomats will allow Western politicians to save a bit of face, perhaps by offering back a few scraps of borderlands here and there. Through it all, Russia will do what’s in its broad interests.

The West has been humiliated. NATO is looking more and more like a paper tiger. The U.S. level of gravitas in the world is in free fall. Our U.S. national leadership — and I mean members of both political parties — looks like a ship of fools.

What can the West do for now? Many of the silliest, most big-mouthed politicians ought to collectively resign and make room for a new crop of leadership that’s smarter (we can only hope).

With or without the departure of many current names from the roster, however, there are larger lessons to be drawn from the situation in Ukraine. In other words, the key issue for the future is how nations across the world will in the future resolve territorial-demographic disputes and redraw old maps.

How will the West work things out with Russia? To be sure, it will set a global precedent. Indeed, Ukraine-Crimea will affect how, for example, China goes about expanding its territory at sea, or with India, or how it deals with Japan. In other words, the Ukraine situation is going to echo around the globe for many years to come.

So to sum up, Crimea isn’t really all about Crimea anymore. It’s about what protocols the West establishes for other nations with territorial and demographic disputes. This is what’s crucial. Can the West pull something useful out of this pol-mil-dip thrashing?

Looking ahead, it’s time for the U.S./NATO to get serious about the next advances in military technology. For all the money that the U.S. spends on “defense,” much of it goes for salaries, health care and supporting legacy systems. Yet U.S./NATO budgets go down, while, say, China is on a continual investment spree.

In general, U.S. procurement is a badly broken process, requiring too many years and way too much money to do even “simple” things — simple in the sense that they are essential and ought to happen in due course.

Ed. Note: The future of warfare will change forever in the coming years. New technology is being developed all the time that is designed secretly attack strategic targets on a digital level, intending to cripple their infrastructure. The result will be a new kind of war that takes place in a completely different domain – but is every bit as dangerous. In today’s Daily Reckoning, readers were given an opportunity to discover Byron’s latest report on the subject – and how it could make early adopters insanely wealthy. If you’re not getting The Daily Reckoning email edition, you missed out. Click here now to sign up, and start getting the full story, every single day.