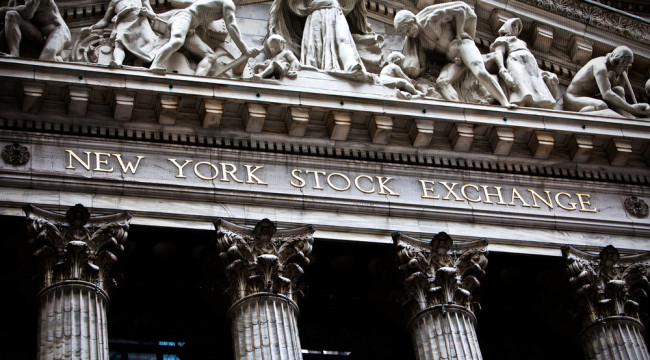 Today it was used… again… for the third consecutive time this week.

Sounds copesthetic. But all is not as it seems in the markets…

Upon closer inspection, Rule 48 implies something is very wrong in the stock market. Something that could be a flashing red signal you need to steer clear of stocks.

But before we explain what this rule is and why it’s dangerous, we offer one piece of financial advice…

Rule 48 is a little-known regulation that the NYSE uses to pre-empt panic selling at the stock market. It was approved by the Securities and Exchange Commission back in 2007, but has very rarely been employed. NBC explains:

The goal of Rule 48 is to ensure orderly trading amid financial market turbulence.

It’s only used in the event that extremely high market volatility is likely to have a floor-wide impact on the ability of designated market makers to disseminate price indications before the bell.

Unlike a circuit breaker that stops stock trading, Rule 48 makes it easier and faster to open the stock markets when there are fears that the market could open with a lot of volatility that would disrupt trading.

Rule 48 speeds up the opening by suspending the requirement that stock prices be announced at the market open. Those prices have to be approved by stock market floor managers before trading actually begins. Without that approval, stock trading can begin sooner.

Ask your fellow man on the street if he thinks these are desirable goals, and you’ll get a nod or a blank stare.

Though the goals of Rule 48 are laudable, something stinks…

In order for the powers that be to invoke Rule 48, they need to determine whether or not the current conditions will cause market disruptions. Here’s what they look at…

As you might expect, out of the 77 times Rule 48 has been invoked, 35 occurred in 2008 during the shaky days of the financial crisis.

Question for you: Do you know what a red flag looks like?

If not, a market rule that’s invoked half the time during the worst financial meltdown in recent history and then again last week during the sharpest sell-off this year, fits the bill.

This week alone, Rule 48 has already been invoked twice, and it’s only Wednesday!

In 2008, the stock markets were subject to great volatility over fears of a global recession and in 2010, the European debt crisis caused panic buying and selling.

The rule was also invoked during the August-September 2011 time frame, when European debt crisis fears again roiled the markets, and in early 2015, when massive snowstorms swept across the U.S.

It stands to reason that you would not need to summon this type of market control so frequently in such a short span of time if everything was hunky-dory.

U.S. stocks suffered their third-worst loss of the year on Tuesday as part of a global rout sparked by a new round of weak Chinese economic data.

China’s official manufacturing purchasing managers index fell to a three-year low, triggering a wide selloff in stocks across Asia and Europe that then spread to the U.S.

Tuesday marked the third-biggest daily drop of the year for the S&P 500 and the Dow, while for the Nasdaq, it is the third worst by percentage decline.

Setting regulations like Rule 48 and nearly four hour NYSE outages (among many others) are red flags billowing in the wind.

There is a pervasive idea seeping into the mainstream that the stock market shouldn’t be allowed to go down.

You see it in China, where the government is doing everything to prop up stocks shy of passing a law requiring every Chinese person to buy equities.

You see it here in the U.S. Not only when Rule 48 is invoked, but when politicians or the Federal Reserve talk about the stock market’s outlook in press conferences.

“Financial markets” explains our editor, Peter Coyne, “are like ecosystems. Things grow and shrink… things are born and die… things go up and down. You can’t have all up and no down… all birth and no death… all growth and no shrinkage.

“When you try to make that happen, things get freakish and have big, bad consequences. Nothing unnatural lasts…”

“Maybe the market needs to be volatile at the open. And maybe stocks need to go down, and by a lot. Who’s to say?”

What Can You Do? Play by the Rule…

Let’s take stock of where we are. Rule 48 is at best, a tourniquet for a gushing artery. Eventually, there will need to be a more permanent solution. In preparation for that, we say again, Caveat Emptor — buyer beware.

Invoking Rule 48 could cause the very uncertainty it means to stop. As CNBC’s Nicholas Wells writes:

It’s sort of a chicken and the egg thing: Do traders respond to the invocation of Rule 48 by selling, or is the market heading down already and Rule 48 is just a flag thrown on the way down? In any case, when Rule 48 is called it can mean rough trading on the Big Board.

That said, for the more daring among you, there are certain sectors to keep your eye on…

Overall, stocks in the energy and basic industries sectors saw the worst performance, according to data from Kensho.

The study from Kensho looked at how stocks in the S&P 500 performed if they were bought the day before Rule 48 was called, and sold the day after. Aes, for example, traded positive less than half the time and had a median return of negative 2.7 percent. Murphy Oil, Halliburton and Chesapeake Energy were among those that had median returns below negative 2 percent.

Often in times of volatility, the outperformers are basics that consumers need. Investors flock to consumer staples, utilities and real estate in particular, and a Rule 48 day is no different. The top performers were Netflix, Green Mountain Coffee Roasters and HCP, a health-care real estate company.

And remember, as long as Rule 48 is invoked, caveat emptor.

P.S. When you sign up for the Daily Reckoning, you will receive just that; timely and entertaining ideas everyday that will help you understand how markets work. Did I mention it’s free? Because it is! Sign up here today to start receiving the Daily Reckoningto your inbox, completely free of charge.