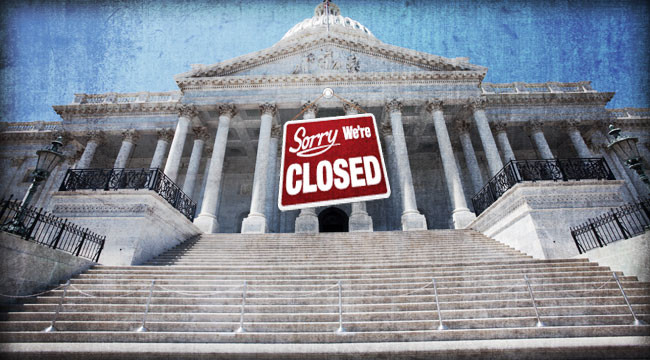 Rooting for a Lengthy Government Shutdown

The federal government has shut down. It seems hard to talk about anything else this morning. The market as I write is shrugging off the news.

I was curious about the history of government shutdowns in America. Below, I’ve pieced together a quick ‘n’ dirty history of how this political varietal came to be. (I found AP writer Connie Cass’ “Closed for Business? Government Shutdown History” to be most helpful.) And near the end, we’ll look over how they impact the stock market — and what you should do (or not).

The showdown came a year later with Reagan vetoed Congress’s budget in 1981. This resulted in the first government shutdown…

As you know, the U.S. Congress has the power of the purse. The Framers did this as a way to check the power of the presidency. It didn’t work that way in practice because the federal government would buy on credit and then come back to Congress to get a bill passed to pay the debt.

This obvious end-around the rules closed with the passage of the Anti-Deficiency Act in 1884. Over time, there have been a number of amendments. The purpose of the law is the same as it ever was: to expose federal employees who spent money not approved by Congress to penalties, including jail time.

But that didn’t really work either. Congress was slow to approve bills on time. Some agencies went a full year without an approved budget. Nobody went to jail, and eventually, Congress got around to funding the gaps retroactively. It was a system of willfully ignoring (and not enforcing) the Anti-Deficiency Act.

That ended with President Jimmy Carter’s attorney general Benjamin Civiletti in 1980. He issued an opinion (actually, two opinions) defending the Anti-Deficiency Act, and he threatened to prosecute those who ignored it. Either government had the authority to spend the money or it did not. And if it did not, then it would have to start shutting down, sending people home to save money, etc.

The first casualty was the Federal Trade Commission. Shortly after Civiletti’s opinion, funding for the FTC expired. The FTC sent nearly 2,000 workers home, canceled cases, etc. It was the first agency to shut down because of a budget dispute. It didn’t last long, and lawmakers quickly fixed it. The FTC started up again the next day.

A bigger fight was brewing, however.

The showdown came a year later with Reagan vetoed Congress’s budget in 1981. This resulted in the first government shutdown — workers sent home, agencies closing — but it lasted only hours. Congress approved another emerging budget that Reagan signed off on, and government opened on time the next day.

(To be clear, many sources cite the 10-day shutdown in 1976 as the first shutdown. But this was not a shutdown as we would recognize it now. There were funding gaps, but government agencies did not stop work.)

There were more shutdowns in Reagan’s time in office, but these were mere mayflies, lasting only a day or two.

The big shutdowns came when Clinton was president and Gingrich ran the House. Two shutdowns — one was for six days and the other was for 21 days, the longest shutdown ever.

The 1996 shutdown of the federal government was the last one up to now.

The key question is what the stock market does during times like this. Mostly, the market falls. If you look at all 17 funding gaps/shutdowns since 1976, the S&P fell just 2.5% if the shutdown lasted more than 10 days and just 1.4% if they lasted less than that. In the big Clinton-Gingrich 21-day show, the market fell almost 4%.

The debt ceiling fight is a bigger concern, I think. Last time we went through one of those — in the summer of 2011 — the stock market fell nearly 14% from July 13 (when Moody’s put the U.S. credit rating on “watch” ahead of a downgrade on Aug. 5) to the low of Aug. 10.

The key question is what the stock market does during times like this.

In any case, the shutdown is a temporary thing. I don’t plan to do anything differently because of a shutdown.

If anything, I’m rooting for a good, long shutdown.

First, because I am amused by the circus of it all — the blowhard politicians, the idiotic talking heads, the absurdity and the delicious irony involved.

On this last point, The Washington Post had an article last weekend exposing the “use it or lose it” spending habits of government agencies. The Department of Veterans Affairs bought $562,000 worth of artwork in the past week, the Coast Guard spent $178,000 on cubicles and the USDA bought $144,000 worth of toner cartridges.

The list goes on and on. One agency bought three years’ worth of staples. Most federal agencies wind up spending nearly 10% of their annual budget in the last part of the fiscal year. And all of this while the government is out of money, deficits mount and debt piles up.

Second, I hope the market gets knocked down good and hard. I would love the opportunity such a sell-off would present. Any long-term investor ought to be rooting for a good correction.

Otherwise, it’s just another Tuesday. Maybe there will be less traffic on the roads for the commuters. Maybe people will realize just how nonessential the nonessential government employees who will be sent home are.

One thing is for sure: People’s faith in government should take another deserved lick.

Ed. Note: Federal spending will eventually resume in earnest and all this “shutdown” talk will become another piece of history. But what will the markets look like when the dust finally settles on this most recent political grandstand? The Daily Reckoning email edition had much more to say on that topic in today’s issue… and offered readers a few unique investment opportunities to take advantage of it. If you’re not getting the Daily Reckoning email edition, you’re only getting half the story. Sign up for FREE, right now.