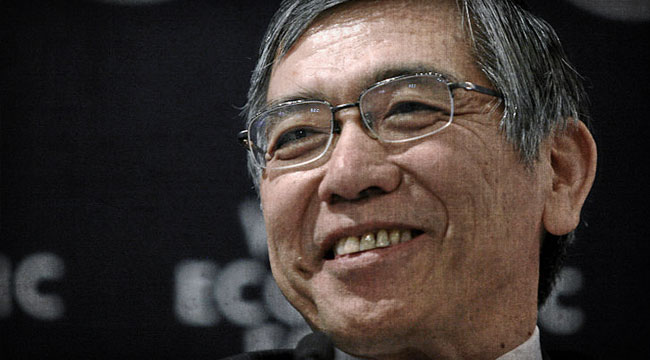 The Road to Zimbabwe is Paved With Central Bankers' Good Intentions

In politics and economics we live in a fantasy world.

The feds claim to improve our economy. We pretend to believe it.

Did a central bank ever add one single centime, one peseta, one zloty or one fraction of a mill to the world’s wealth?

Victory or death! He will either revive the Nipponese economy… or he will kill it!

Not that we are aware of.

But all over the world, central bankers pretend to sweat and toil on behalf of mankind — correcting… adjusting… nullifying the decisions of honest men and women going about their daily business.

Interest rates are too high! Inflation is too low! Not enough demand! Too much savings! They are omniscient as well as all-powerful.

In Japan — now back in recession — Prime Minister Shinzō Abe has taken off on a kamikaze mission. Victory or death! He will either revive the Nipponese economy… or he will kill it!

Abe may succeed. But we’re happy to bet he doesn’t.

Our new Trade of the Decade — buy Japanese stocks and sell Japanese government bonds — aims to capture the disaster in dollars and cents.

Abe and his delusional copilot at the Bank of Japan, Haruhiko Kuroda, have their flight jackets on. They’re about to take off… creating incredible amounts of new money and credit.

The Japanese economy expects it and depends on it. But when word gets around that there is no way the government can ever repay its debts, there is sure to be trouble.

Investors will dump Japanese government bonds, leaving the Bank of Japan as the only source of financing for the government’s deficits.

This will put Japan in roughly the same spot as Zimbabwe in the early 2000s… and Argentina in the 1980s. Stocks will soar, as investors seek safety in productive assets. Bonds and the yen will crash.

And in Europe, Bloomberg reports:

Mario Draghi strengthened his stimulus pledge for the euro area by saying the European Central Bank can’t hold back in its fight to revive the economy.

“Draghi is sending a clear signal that more stimulus is coming,” said Lena Komileva, chief economist at G Plus Economics Ltd. in London. “If the ECB’s current measures prove underwhelming and inflation expectations fail to recover, the ECB will act to expand QE.”

“What’s wrong with that?” we hear you asking.

But it’s a problem, says its chief banker. “Excessively low” is how Draghi describes the public’s fear of inflation. He vows to do something about it.

The same thing the Japanese are doing!

In the New World the real economy continues to deteriorate. But the stock market floats along like a hot-air balloon in a children’s cartoon.

The Fed has turned off the QE gas. But it has its hand on the valve, ready to turn on the jets as soon as prices sink.