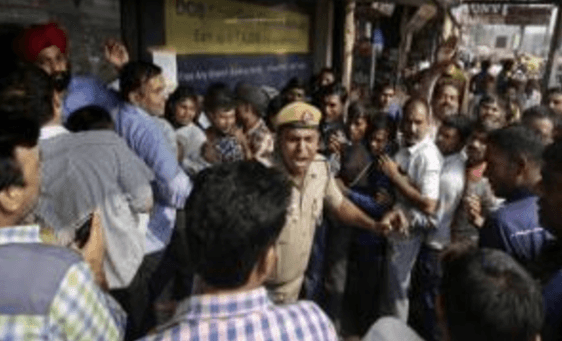 “I expected this soon,” Jim Rickards alerted us this morning…

“But it’s playing out now.”

Once released, it freezes every normal water molecule it contacts. Then it spreads… and spreads… until every body of water in the world is frozen solid.

Ninety percent of all transactions in India are conducted in cash. And India just shocked its citizens this week by suddenly banning its popular 500-rupee and 1,000-rupee bills, worth $7.50 and $15 respectively. Hundreds of millions who depend almost exclusively on cash have been reduced to barter.

The Los Angeles Times: “The plan was shrouded in such secrecy that even India’s financial institutions were ill prepared, creating long, sometimes unruly lines outside banks, ATMs and chronically understaffed post offices that are authorized to exchange the now-worthless notes.”

“Now I have nothing,” lamented one Anand Tokas, speaking for multitudes. “If I don’t withdraw cash today, I will have nothing to buy even basic essentials.”

The government plans to issue new bills with security features to stop counterfeits. For now, “the 100-rupee note [is] the basic legal tender for most transactions,” adds the Times, “reducing the world’s seventh-largest economy to trading largely in the equivalent of $1 bills.”

Indian media say at least five people croaked from exhaustion waiting in line to exchange their money. And three children have reportedly died because hospitals wouldn’t treat them. They wouldn’t accept the old, now useless notes the families offered.

And so the war on cash takes on frightful, grisly dimensions…

The ban was hailed as a noble and patriotic crusade against corruption, tax evasion and black market hellcats. Prime Minister Narendra Modi even blabbed, “I promise you I will give you the India of your dreams.”

Here Jim takes the blush off the peach:

Governments always use money laundering, drug dealing and terrorism as excuses to keep tabs on honest citizens and deprive them of the ability to use money alternatives such as physical cash and gold.

The whole idea of the war on cash is to force savers into digital bank accounts so their money can be taken from them in the form of negative interest rates… You might think you can get your cash, but you can’t… They’re being herded into digital pens, which are the banks.

The ultimate goal, of course, being a cashless society. All money’s imprisoned within the banking system. And you can only access yours with its permission, and on its terms.

Lest you think this sort of thing only happens in third-world fleapits… “ice-nine” is spreading to the Anglosphere.

“It’s only a matter of time,” grins the Australian payments firm Tyro…

Citibank announced Tuesday that some of its Australian branches are now going cashless. And banking behemoth UBS bleated Monday that Australia should follow India’s lead by junking its A$100 bank note. Probably its A$50 too. These notes comprise 92% of all Australian currency (by value anyway).

“Removing large-denomination notes in Australia would be good for the economy and good for the banks,” UBS said in a note to clients, one eye on the greater good, the other on the bottom line…

And about that bottom line…

“From the banks’ perspective, there would likely be a spike in deposits — if all the A$100 notes were deposited into banks (ignoring hoarded A$50s), household deposits would rise around 4%.”

But for the greater good, mind you.

It’s happening in India… Australia… Europe… and America, too.

Add it all together and it’s more cash in the clutches of the banks… more sheep in the digital pens… and another mile marker on the road to a cashless world.

Or is it the road to ruin?