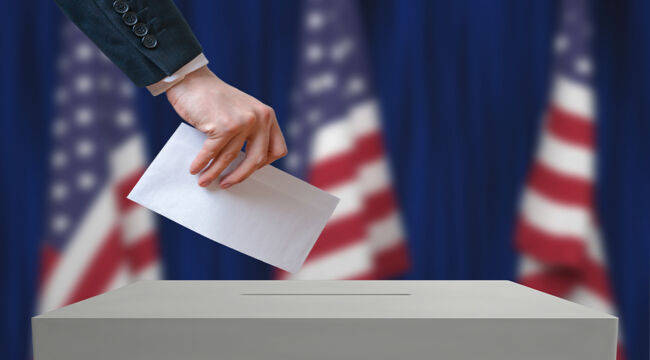 After months of analysis, headlines, debates, commercials, polls and more we’re finally on the brink of Election Day. On Nov. 8, just a few days from now, Americans will vote for senators, governors, House members and other offices from coast to coast.

These contests will determine which governing philosophy controls the country for the next two years. It will also lay the foundation for the presidential election in 2024 (that campaign starts the day after the midterm election). Everything that citizens, investors and markets care about is on the line.

Put on your crash helmets. This is going to be a wild election ride. Where do things stand just over a week away from the elections? Let’s break it down…

If the economy is good, stocks are going up and the U.S. is not involved in any wars, then voters will just reelect incumbents or vote for their party’s nominees without paying much attention to the issues.

The voters are content, and the politicians are free to implement the wish lists of the special interests.

This is not one of those times…

• The U.S. is indirectly involved in a major war in Ukraine, which has the potential to escalate into a new world war including the use of tactical nuclear weapons…

• Inflation is up, crime is up, reading and math scores are down and it seems the main role of teachers is to indoctrinate children in transsexualism and drag shows.

In all, there has seldom been an election since the 1930s (and before that, the 1860s) when issues mattered more.

The Republicans get this, although they are often too afraid of being called names to say so. Democrats don’t get it. They’re still talking about climate alarmism, abortion and bail reform when it’s clear either that voters don’t care or rank those issues far down their lists of issues that will dictate how they vote.

When it comes to issues, Democrats are clearly missing the boat.

Meanwhile, research shows that presidential popularity is one of the biggest determinants of a wide range of outcomes in midterm elections.

The best measure of presidential approval is the Rasmussen Reports Daily Presidential Tracking Poll. This poll uses a sample size of 1,500 likely voters, which is a solid representative sample. The margin of error is +/- 3%, which is reasonably tight for a poll of this type.

I consider Rasmussen to be a reliable poll, but I also look at Trafalgar, which has an excellent track record. Trafalgar shows Biden’s “strongly approve/strongly disapprove” gap at almost negative 39%!

This poll supports the Rasmussen result and suggests that Biden is in an even deeper hole than most analysts realize.

A midterm election for a first-term president almost always results in losses in Congress for the president’s party. With Biden’s approval rating at negative 22%, there’s every reason to expect a red wave in this election.

In fact, it may look more like a red tsunami.

My Forecast for the House

In the House races, my final forecast is that Republicans will win 245 seats while Democrats take 190 seats. Republican leader Kevin McCarthy will be elected as speaker of the House in January.

The House currently consists of 220 Democrats and 212 Republicans with three vacancies. My forecast means a pickup of 33 seats for the Republicans and a loss of 30 seats for the Democrats. That result is consistent with midterm election swings in the first presidential terms for presidents of both parties.

That’s still a healthy working majority for Republicans, but it’s a far closer result than my forecast. But I expect a number of districts that Cook is calling for Democrats to go for Republicans.

RealClearPolitics, which is far more reliable than Cook or Politico, has a forecast of 225 Republicans and 175 Democrats with 35 toss-up races. If those toss-ups were divided 50/50 (with the rounding given to the Democrats), the final House would be 242 Republicans and 193 Democrats.

That’s within a few seats of my forecast and lends support to my methodology. If just a few more than half the toss-ups go Republican, then my forecast is right on the money based on the RealClearPolitics models.

To sum it all up, the Republicans are almost certain to take the House of Representatives. The majority will be substantial by any measure.

The Senate is currently divided 50-50. The Democrats have control because Vice President Kamala Harris has a tiebreaking vote. There are 35 Senate seats up for election in this cycle. Democrats control 14 and Republicans control 21.

My final forecast for the Senate is that Republicans will have 53 seats in the new Senate and the Democrats will have 47 seats. (That count includes two non-Democratic senators who both caucus with the Democrats. Neither is up for election in this cycle).

I project that Republicans will win in Arizona, Georgia, Nevada, North Carolina, Ohio, Pennsylvania and Wisconsin. Democrats will win in Colorado, New Hampshire, and Washington.

If this forecast is correct, then Republicans will hold their seats in North Carolina, Ohio, Pennsylvania and Wisconsin, and will flip seats in Arizona, Georgia and Nevada.

This outcome leaves the Republicans with 53 seats, and the Democrats with 47 seats. Incidentally, my forecast is identical to RealClearPolitics, which projects a Senate of 53 Republicans and 47 Democrats with the same states in each column.

Any wins by Democrats not in my forecast are likely to be offset by unexpected wins by Republicans leaving the outcome at 53-47 in favor of Republicans.

But it wouldn’t be a 21st-century American election without some shocks and surprises. Here are a few to watch out for:

Pennsylvania has active litigation on whether mail-in ballots should be counted if they lack a signature on the envelope as required by state law. In a close race, this issue will come to the fore. It could drag out the declaration of a winner by weeks or months with acrimony from both sides…

Georgia requires a winner to have more than 50% of the vote. If neither Warnock nor Walker reaches the 50% level (due to third-party candidates and write-ins), then there will be a runoff election between the two leaders on Dec. 6, 2022. That will also delay the final declaration of a winner.

If, after Election Day, control of the Senate itself is uncertain because it hangs on those undecided races (such as Pennsylvania and Georgia), you can expect a strong negative reaction from markets.

The stock market can deal with Republicans or Democrats. It cannot deal with uncertainty. All I can say is don’t be surprised if all this drags on for a while.