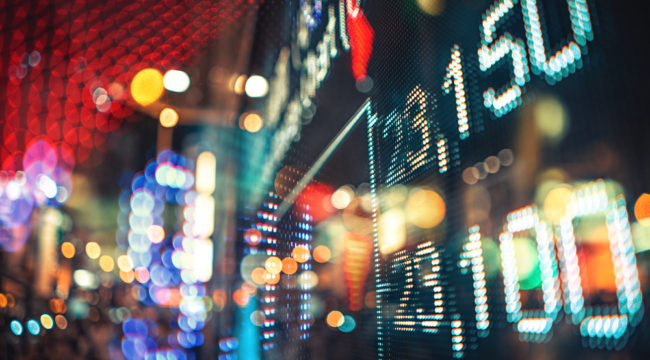 The Market’s Got It Wrong

That’s Yellen’s typical response to a long litany of data that shows the U.S. is in the grip of a powerful disinflationary trend that may lead to outright deflation — a central banker’s worst nightmare.

The Fed has a publicly announced 2% inflation goal, which they consider to be price stability. In fact, 2% inflation cuts the purchasing power of the dollar by 75% in the course of an average lifetime. The Fed would tell you to ignore that.

Why 2% inflation is considered “price stability” is a subject for another day. For now, let’s just accept the Fed’s definition and see how the Fed responds from a policy perspective.

The Fed carves out food and energy prices from inflation. That gets to something called “core” inflation.

The Fed’s preferred metric is calculated monthly by the U.S. Commerce Department as the personal consumption expenditure (PCE) deflator. The Fed’s preferred interval is monthly data compared to the same month one year earlier, or “year-over-year,” YOY.

With a 2% target for PCE core YOY, what’s the actual time series of data? Here it is:

An objective analyst would give the Fed credit for coming close to their target in late 2016. This is precisely why the Fed embarked on a path of rate hikes. The Fed raised interest rates in December 2016, March 2017 and June 2017.

The chart below is taken from a presentation given by Janet Yellen on September 26, 2017. The black horizontal line is the Fed’s 2% inflation target. The blue line represents actual PCE inflation; the red line represents PCE “core” inflation with food and energy prices removed, (the Fed’s preferred method). The downward trajectory of the red line should be disturbing to the Fed, but is routinely dismissed as “transitory.” 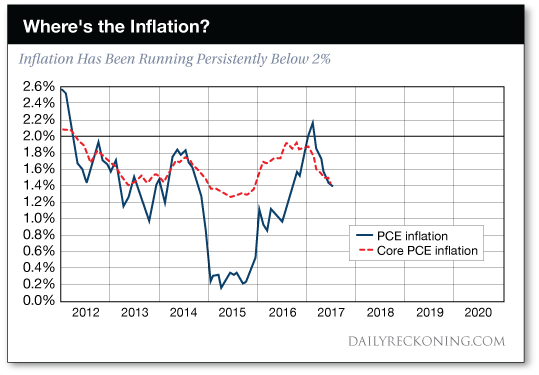 To answer that question, bear in mind that monetary policy works with a lag. That insight is one of Milton Friedman’s few economic contributions that has stood the test of time.

The Fed has been tightening in fits and starts since Bernanke’s “taper talk” in May 2013. This has resulted a consistent pattern in which Fed tightening slows the economy, then the Fed flips to ease, and the economy picks up steam, which leads to another round of tightening, and another slowdown.

The Fed’s late 2016, early 2017 tightening cycle has now come home to roost. In the latest nine-month time series, shown above in the table and chart, inflation was flat or down in every month, and dropped a total of 0.6%.

That’s huge. The Fed’s range for this purpose is 0% to 2%. The floor is 0% because the Fed must avoid deflation. The ceiling is 2% because that’s the Fed’s announced target. A 0.6% drop covers 30% of the target range. It’s a quite significant move, and all in the wrong direction.

What’s Yellen’s reaction to this in-your-face data? In effect, she says. “It’s transitory!”

First Yellen blamed a price war among cell phone service providers. Then she blamed the strong dollar, which tends to lower import prices (with a strong dollar you get more for your money abroad so unit costs decline).

Then she blamed health care costs because they’re government administered and not responsive to Fed monetary policy. Then she blamed hurricane damage from Harvey, Irma and Maria.

Why are Yellen and her colleagues in denial about the persistence of disinflation? Why are they insisting that an obvious trend is merely “transitory?”

The first analytic flaw is Yellen’s belief in the Phillips Curve. This model presents an inverse relationship between unemployment and inflation. As unemployment goes down, labor scarcity leads to wage increases above growth potential. This leads to inflation.

The Fed assumes that because of low unemployment today, inflation must be right around the corner.

Yellen also believes that monetary ease, acting with a lag, feeds inflation. Therefore it is necessary to tighten policy before inflation arrives in order to avoid getting behind the curve.

Monetary policy does act with a lag, but it does not directly cause inflation. It may add fuel to a fire, but it’s not the catalyst. The Fed has created $3.5 trillion of new money since 2008, yet there has been no appreciable amount of inflation for nine years.

The cause of inflation is not money supply but psychology. It is expressed as velocity — the speed at which money is turned over through lending and spending. Velocity depends on behavioral psychology, or what Keynes called “animal spirits,” regardless of the amount of money around.

Yellen sees inflation under every rock despite the lack of empirical evidence. In fact, the evidence as revealed in the time series of PCE data above points toward disinflation and deflation.

Reality is catching up with the Fed. They will respond by taking a “pause” on an interest rate hike in December. This is the opposite of current market expectations.

What about the prospects for disinflation and Fed easing?

The most important development is recent strength in the U.S. dollar. This has the effect of lowering import prices, which feeds into the U.S. manufacturing supply chain. Cheaper imports also put a lid on the ability of competing U.S. producers to raise their own prices.

Second, the September employment report came out last Friday. A Reuters survey of economists had expected the economy to add 90,000 jobs in September.

How many did it really add?

Zero. Less than zero, actually. The economy shed 33,000 jobs. This was the first time in seven years that the U.S. economy lost jobs.

This may be due to the hurricanes, but coming on top of the weak inflation data that came out recently, it will certainly give the Fed more than enough reason to hit the “pause” button on a December rate hike.

Finally, Yellen’s term as Chair expires at the end of January 2018, just a few months away. It appears she will not be reappointed by Trump. The current favorite to replace her is Kevin Warsh, as I told readers my earlier this year.

The December 2017 FOMC meeting will be Yellen’s last. She does not want her legacy to be that of the Fed Chair who caused a recession by tightening into weakness. That would repeat the classic Fed blunder of 1937.

Yellen’s legacy is secure because she was able to begin rate hikes and balance sheet normalization, both of which reversed the easy money policies of Ben Bernanke. She will rest on those laurels and not take a risky rate decision on her way out the door.

Eventually the markets will figure this out. Right now markets are giving a nearly 90% chance of a rate hike in December based on CME Fed Funds futures. That rate will drop significantly by December 13 when the FOMC meets again with a press conference. (There’s another meeting on November 1, but no one expects any policy changes then).

As market probabilities catch up with reality, the dollar will sink, the euro and gold will rally, and interest rates will resume their long downward slide.