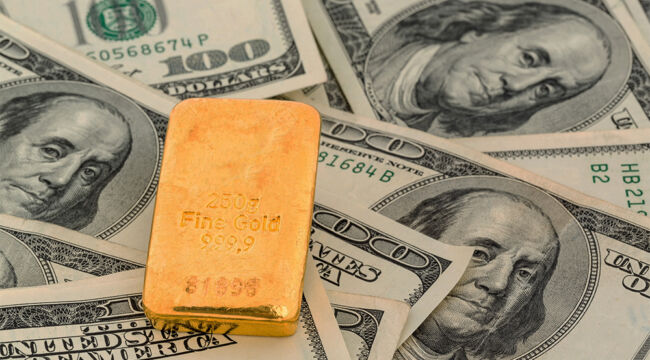 I’m here in Bretton Woods for one reason — to participate in a key discussion about the Fed and the monetary system called “Money and Power.”

More importantly, today we discussed the catalyst that will spark the next major market downturn. Go here now for a full replay of today’s blockbuster event.

Look, I’ve been studying monetary economics for about 50 years. All of my research has led me to one conclusion — we’re going to see the collapse of the international monetary system.

Over the past century, monetary systems have changed about every 30–40 years on average. Before 1914, the global monetary system was based on the classical gold standard.

Sure enough, 31 years after the end of the classical gold standard, in 1945, a new monetary system emerged at Bretton Woods. The dollar was officially designated the world’s leading reserve currency — a position that it still holds today.

Under that system, the dollar was linked to gold at $35 per ounce. From 1950 into the 1960s, the Bretton Woods system worked fairly well. Trading partners of the U.S. who earned dollars could cash those dollars into the U.S. Treasury and be paid in gold at the fixed rate. But by 1970, the U.S. had lost over half of its gold.

In 1971, Nixon ended the direct convertibility of the dollar to gold. For the first time, the monetary system had no gold backing. It would now be based on floating exchange rates, without a golden anchor.

On top of that, the unprecedented sanctions that the U.S. and its allies imposed on Russia following its February invasion of Ukraine have only accelerated the move toward a new monetary system.

The sanctions take many forms and affect many different areas of commerce and trade, but what they all have in common is the use of the U.S. dollar as the principal weapon.

Whether the West is banning exports, limiting imports, stopping investment or freezing assets, it is using the dollar payment system and dollar accounts in correspondent banks to enforce the sanctions.

Nations around the world realize that as long as they are dependent on dollars for holding assets or purchasing global commodities, they will be under the thumb of those who control the dollar payments systems, which is basically the U.S. with some help from big European and Japanese banks.

Nations also know that while Russia is the current target of sanctions, others could easily be next. If China turns up the pressure on Taiwan, for example, then it could soon be subject to dollar-based sanctions also. The only way to escape the sanctions is to escape the dollar.

The only real question is what will replace today’s dollar-based monetary order?

The Reluctant Return to Gold

But in a scenario where there’s a total loss of confidence, they’ll likely have to go back to some form of a gold standard.

Few remember that in 1971, Nixon explicitly said that the suspension of gold convertibility by trading partners was being done “temporarily.”

I spoke to two members of the Nixon administration, the late Paul Volcker and Kenneth Dam, who were with the president at Camp David the weekend the suspension was announced. They both confirmed to me that the intention was for the suspension to be temporary.

The plan was to convene a new international monetary conference; devalue the dollar against gold and other currencies, primarily the deutsche mark, Swiss franc and the Japanese yen; and then return to the gold standard at the new exchange rates.

The first part did happen. There was an international monetary conference in Washington, D.C., in December 1971. The dollar was devalued against gold (from $35.00 per ounce to $42.22 per ounce in stages) and other major currencies by about 10–17%, depending on the currency.

Yet the second part never happened. There was never a return to a gold standard. While countries were negotiating the new official exchange rates, they also moved to floating exchange rates on international currency markets.

The cat was out of the bag.

Why Do Central Banks Cling to a “Barbarous Relic”?

We’ve been living with floating exchange rates ever since. The creation of the euro in 1999 was a way to end currency wars among the European nations, but the EUR/USD currency wars continue.

The temporary closing of the gold window by Nixon has become permanent, though it was only intended to be temporary…

Still, gold is always lurking in the background. I consider gold a form of money rather than a commodity. Central banks and finance ministries around the world still hold over 35,000 metric tons of gold in their vaults, about 17.5% of all the aboveground gold in the world.

Why would they hold onto all that gold if gold was just a barbarous relic?

Looking at the price of gold in any major currency tells you as much about the strength or weakness of that currency as any cross rate. Gold still has a powerful role to play in the international monetary system with or without a gold standard.

A Glimpse at the Dollar’s Future

If you want to see where the dollar is ultimately heading, you should look to the U.K. pound sterling. It had previously held the dominant reserve currency role starting in 1816, following the end of the Napoleonic Wars and the official adoption of the gold standard by the U.K.

The period from 1919–1939 was really one in which the world had two major reserve currencies — dollars and sterling — operating side by side.

Finally, in 1939, England suspended gold shipments in order to fight World War II and the role of sterling as a reliable store of value was greatly diminished. The 1944 Bretton Woods conference was merely recognition of a process of dollar reserve dominance that was decades in the making.

As with the pound sterling, slippage in the dollar’s role as the leading global reserve currency is not necessarily something that will happen overnight. But as I mentioned earlier, the unprecedented dollar sanctions against Russia will only hasten the process.

No investor should be surprised if the crisis happens sooner rather than later. We are closer to a new system in which gold again plays a bigger role than most realize.