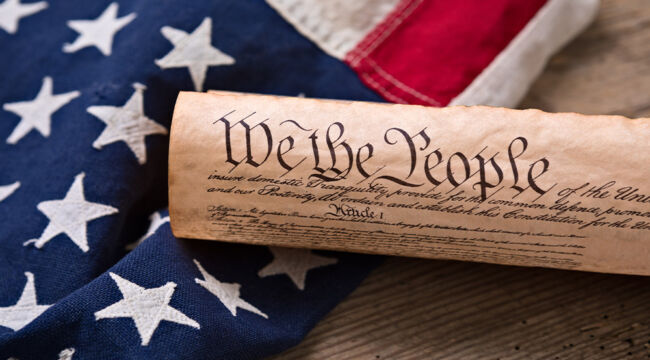 Yesterday we maintained that the American Revolution was a “revolution not made but prevented.”

Less a revolution than an anti-revolution… we might properly label the thing a revolt.

A child may revolt against parental sovereignty. But is he a revolutionary?

Here was the American colonists’ animating purpose: To retake preexisting rights the crown had muscled away from them.

They were not out to create the world anew. They had no care to carve out an “indispensable nation,” or “shining city on the hill.”

No ideological stars dazzled them, no ideological sugar plums waltzed within their skulls. They were grounded in the good American earth. Historian Clinton Rossiter:

However radical the principles of the Revolution may have seemed to the rest of the world, in the minds of the colonists they were thoroughly preservative and respectful of the past… The political theory of the American Revolution, in contrast to that of the French Revolution, was not a theory designed to make the world over.

For novel abstract theories of human nature and society, most of the men who subscribed to the Declaration and the Constitution had no relish.

All Men Are Created Equal

Did not Mr. Tom Jefferson claim that all men are created equal?

He did, yes. Yet as Kirk noted:

Jefferson, not unaware of his own remarkable talents, scarcely could have thought that every man… could become the intellectual peer of Thomas Jefferson… There were some demagogues in the Continental Congress, but Jefferson was not of their number, and the large majority of the Declaration’s signers were realists with broad experience of the world, not given to sentimental or false slogans…

The men of the Continental Congress… did not take Jefferson’s equality clause as an affirmation of literal equality in body and mind. (In one early draft of the Declaration, the phrase is “equal & independent”; in another rough draft, “& independent” is crossed out… they did not look upon the average American, let alone the average man everywhere, as their literal equals. They did subscribe to two venerable concepts of human equality: equality before the law, and equality in the judgment of God.

To this day scholars flog their brains to decode Jefferson’s riddle.

But after America’s “Second Founding” — following the Civil War and the 14th Amendment — the Declaration and the Constitution underwent a transformation.

They began to give off ideological glows previously undetected.

That is, they began to radiate the crusading ideology of egalitarianism previously undetected.

As Mr. Lincoln had declared at Gettysburg: The American nation “shall have a new birth of freedom.”

The new birth of freedom demanded the death of the old freedom.

It required an energetic, centralizing government… busy with the business of equality on ever-expanding and heavily contested fronts.

The civil rights legislation of the 1960s was perhaps its high moment, its culmination.

For good? For ill? Neither? Both?

Here we offer no judgment. We merely report the record, as a sportscaster reports the action, or an obituarist reports a death.

Yet equality’s reach forever exceeds its grasp. Today the very concept of equality is being shouldered out of the way by “equity.”

Again, for good or ill? We once again reserve judgment.

Yet this we maintain with confidence: The United States Constitution has endured what old Aristotle labeled “a revolution within the form.”

A revolution within the form? “Old Right” journalist Garet Garrett:

Aristotle observed that “People do not easily change, but love their own ancient customs; and it is by small degrees only that one thing takes the place of another; so that the ancient laws will remain, while the power will be in the hands of those who have brought about a revolution in the state.”

You will discover a corpse.

The old confederation of sovereign and independent states, mightily jealous of their rights, has yielded to the leviathan central state we enjoy so much today.

Every last detail of American life this creature watches, regulates and controls.

Where does it locate its authority in the Constitution? Not in the text.

The original words remain, yes. Yet their meaning is not what they once were. They have undergone a sort of revolution — a revolution within the form.

The Constitution has become an ideological battle axe in the service of an abstraction.

Let us now, briefly, direct our attentions to the French Revolution…

The French Revolution, in contrast to the American Revolution, sizzled and crackled with ideology.

It looked to build society anew — from root to branch, from cellar to attic. It blasted away all existing social and political foundations.

God, Himself was chased out of France, deported, banished, exiled. Revolutionists sat “reason” down in the vacated throne.

Savagery, barbarism and slaughter on the wholesale followed.

Yet how did it come to be?

France had become a dazzling star of Europe by the 1700s, attaining fantastic civilizational heights.

By the 18th century, France had become the greatest power in Europe, the richest and most populous country in the western world, and the clear leader in art, science, philosophy, education, cuisine, fashion, architecture…and, of course, viticulture. It had the richest people in the world, the prettiest women, and the best booze.

It also had the most enlightened economists – the physiocrats – from whom Adam Smith was boosting some of his best ideas.

A poll taken in the early 1780s might have shown the French to be extremely optimistic and confident. And why shouldn’t they be? The last major financial crisis – caused by John Law’s Mississippi Bubble – blew up over 60 years before. And had the world ever seen anything approaching the splendor of Versailles?

Then came the revolution:

But in 1789, Paris mobs came to the crossroads of history and veered left. They replaced an absolute monarch who had very limited power, with a people’s republic restrained neither by common sense nor common decency.

Why then did France plunge into revolutionary psychosis in 1789? Does it offer a worrying tale of caution to 21st century America?

These questions we tackle tomorrow…