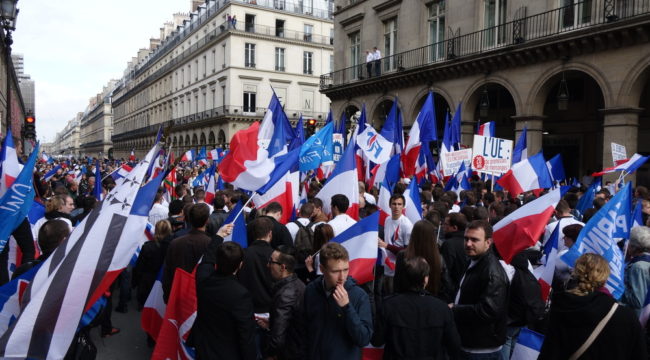 The Revolt of the Masses

It’s a French phrase meaning “How does that work?”

Well, it doesn’t really. Especially when we’re talking about politics or economics. The whole world is a mess… and you know it.

Today, we’re going to give you a special trade. It’s special for a couple of reasons.

It’s free because no one wants to “own” it. Even if it pays off 10-to-1. Jim Rickards won’t take it. Simone Wapler of our Paris office won’t take it.

Those are two of the smartest people I know on the planet who are looking at this trade like it’s dirt.

But let’s think a bit. What do we do around here?

We take chances. We look at things a bit differently than the brain-dead we find on TV. We figure you do too.

And hence, we thought you might want to take a shot on our free trade offer.

But if you’re an adrenaline junkie and willing to go against the grain, you might just like this one.

To set it up, we remind you that both Jim Rickards and Simone Wapler called Brexit… they both called the Trump win… and now this odd epoch of political discord we’re living through.

And their readers profited from their predictions.

Today’s trade is, functionally, what Jim calls an “asymmetric trade.” That means all the bets are on one side of the trade. The other side is cheap — really cheap — because no one wants to stick their neck out and put their money there.

Right now in France, everyone thinks the “independent centrist” (and former banker) Emmanuel Macron is going to win the election on Sunday.

Everyone. Including Jim and Simone.

So what does that do to this trade? It puts you way out of the money. If you bet on a Marine Le Pen win and she actually wins, you win big.

And it’s virtually free to try!

Before I get to the trade, and to put the current political mood in perspective, I’m going to get a bit philosophical on your [expletive deleted]…

In 1929, a gentleman of Spanish origin foresaw the rise of fascism and nationalism. Which dictated the structure of lives for men, women and children all over the world for most of the 20th century.

José Ortega y Gasset was from the old school in Europe. Think white suits and fedora hats. Maybe a glass of wine and some fine conversation among the ruins.

In his 1929 work The Revolt of the Masses, Ortega “traces the genesis of the ‘mass-man’ and analyzes his constitution en route to describing the rise to power and action of the masses in society” [from Wikipedia… I’m cheating a little here, but it’s still good information for you].

Again from Wiki: “Ortega is throughout quite critical of both the masses and the mass-men of which they are made up, contrasting ‘noble life and common life’ and excoriating the barbarism and primitivism he sees in the mass-man.”

“The Fascist and Syndicalist species,” wrote Ortega, “were characterized by the first appearance of a type of man who ‘did not care to give reasons or even to be right, but who was simply resolved to impose his opinions. That was the novelty: the right not to be right, not to be reasonable: ‘the reason of unreason.’”

“The reason of unreason”…

Ortega saw in 1929 what we’re living through today. To many, it’s not enough to simply enjoy one’s own ideas, trade, family or lifestyle. They need to be a part of something bigger… and sometimes less reasonable.

As we’d say in our office: Oy. And oy again.

What do Ortega’s insights have to do with today’s trade?

If you think there’s a movement afoot, one that includes “the reason of unreason,” here’s your trade on Sunday’s election in France.

It comes from Dan Amoss, who’s been extremely adept with market analysis for as long as I’ve known him (closing in on 15 years):

If someone wanted to take a flyer on the French election, I’d suggest buying the iShares MSCI France (EWQ) May $28 put options.

At 30 cents, each put contract flyer would only cost $30.

But again, that’s a racehorse-long shot type of gamble.

Limit orders in the range of 25 cents should get filled.

Here is the latest chart: 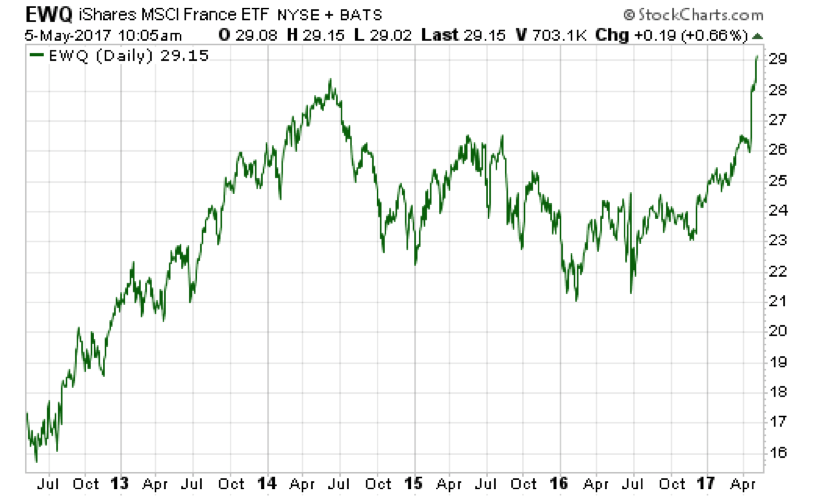 The neat thing is that even if Macron wins, the odds are good that we’ll see a “buy the rumor/sell the news” type of decline in EWQ next week.

So I’d go for it… but remember, this is a one-week holding period.

If Macron wins, there might still be a chance to break even or sell a little above 25 cents.

Those who take the flyer should sell by May 12 — win, lose or break even. It will expire on May 19.

And they should only risk money they wouldn’t miss if the trade winds up a 100% loss.

There’s the trade, compliments of the house. Not a lot to lose… and a lot to gain.

But before we leave you, one final word on The Revolt of the Masses…

The Revolt of the Masses was a seminal work in the early 20th century. And I have to admit the first couple of times I read it, I didn’t really understand what Ortega was trying to get at. But having now lived through the last couple of political cycles, oy, I understand a heckuva lot more.