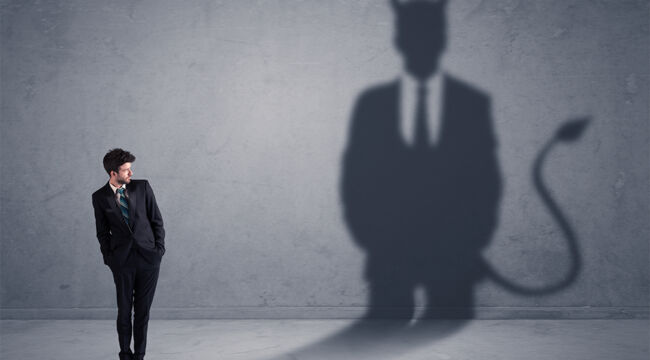 But is the official rate the true rate? A leading question, to be certain. We would not otherwise raise it.

What then is the true federal funds rate? Why does it matter?

Today we hunt our answers in the “shadows”… drive a penetrating light through the murk… and illuminate our findings.

We are in puckish spirits today, devilish spirits. We therefore intend to skewer you upon our fish hook, dangled, until the proper time.

The true federal funds rate is, in your estimate:

Given our characteristic diabolism, let us fluster you with a fifth selection:

Have you selected your answer? The true answer you will have shortly. First we steal a glance onto Wall Street…

The Dow Jones Industrial Average shed 266 points today — its first falling off of the past four trading sessions.

The blue chip Dow Jones Industrial Average fell from a record high on Wednesday as the momentum from a strong earnings season started to fade.

Meantime, the S&P 500 took a 23-point stagger. The Nasdaq Composite spun and spun upon the hamster wheel today, neither gaining nor losing a jot.

Gold scratched out a $5.50 win. Bitcoin absorbed a terrible whaling today, gushing 3,387 points at writing — the price darts around so fast the caveat is necessary.

But today’s question lingers in the air: If not 0.08%… what is the genuine federal funds rate?

The federal funds rate is the interest rate the Federal Reserve controls directly — which — again, hovers presently at 0.08%.

But the Federal Reserve muscled rates down to zero after the Great Financial Crisis. And conventional modeling falters at this zero border.

Thus the economics world slipped into a twilit netherworld — an unmapped wilderness where all familiar reference points faded — and finally fell away.

That is, the economics world vanished into shadow, blinded in both eyes.

They therefore plucked quantitative easing from their basket, and the liquidity flowed forth in rivers, seas, oceans.

The Fed conducts monetary policy via manipulating the fed funds rate. In 2008, when the rate hit zero, the Fed wanted to do more. Unwilling to lower rates below zero, they introduced quantitative easing, or QE. QE effectively lowers rates by buying Treasury and mortgage securities. The reduction of supply leads to higher prices and, therefore, lower interest rates and yields.

Before 2008 we could measure how aggressive monetary policy was by comparing fed funds to measures of economic growth… Since the birth of QE, the [models] do not paint a complete picture of monetary policy. To do that, we must factor in QE and the effect it has on interest rates.

What was quantitative easing’s effect upon conditions?

The Answer Is in the Shadows

University of Chicago Booth economists Jing Cynthia Wu and Fan Dora Xia were out for answers — to penetrate the blackness at the zero bound… and to get light in.

Here is the question they floated: Can we develop an interest rate model that accounts for quantitative easing’s loosening effects?

They conscripted the coffee pot into action, furled back their sleeves, chained themselves to their desks and burned through midnight’s oil… mad for answers.

In 2014 they barreled through the zero boundary and its inky mysteries. Their headlights illuminated the “shadow rate.”

As one observer explains the shadow rate:

Here you had negative interest rates — if you passed the official rate into the shadows beneath zero.

As the Federal Reserve choked off quantitative easing, the shadow rate drifted back toward positive ground.

Officials sent the economy scurrying under the bed, bolted indoors against the onslaughts.

It bludgeoned rates back to zero and undertook quantitative easing in quantities truly astounding, quantities that shamed all previous easings.

Interest rates once again slipped into subzero shadows. There they remain.

What then is today’s true federal funds rate — the shadow rate? Here again are your choices:

You have languished long enough upon our hook. Here now is your answer: D.

The shadow rate gutters along at minus 2.5% — not distant from its 2014 bottoming: 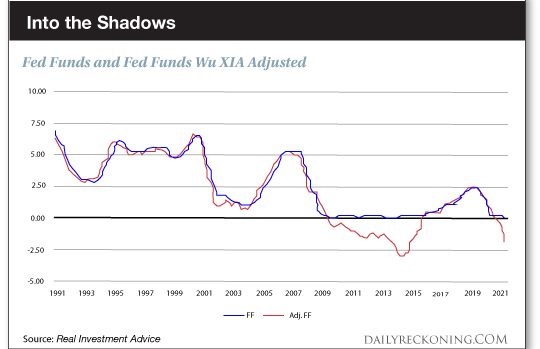 Yet the deepest horrors of the pandemic are over, millions upon millions of employment opportunities are open and inflation goes at its most fevered pace in decades.

Do these conditions not justify a higher rate — perhaps even a positive rate?

“With the data… showing the unprecedented nature of monetary stimulus,” wonders the aforesaid Michael Lebowitz, “we must ask why the Fed continues to drag its feet and maintain extreme crisis-level policy.”

You know the reasons of course. As Mr. Lebowitz affirms:

The markets are banking on the Fed to keep stimulus rolling. The Fed understands its role. They have repeatedly mentioned that they will be very slow to remove stimulus to not upset “financial stability.”

Financial stability is code for asset prices, and the last thing the Fed wants to do is pop a bubble, especially since they blew it up.

The ratio of federal debt to GDP now stands at 125%, up from 105% before the pandemic and more than double the percentage from before the financial crisis.

Without extremely low interest rates to make the new and existing debt affordable, economic growth would disappear, and financial defaults would be plentiful. The Fed must believe they must help Congress worsen the nation’s fiscal imbalances versus dealing with the problem in a sustainable manner. Expediency at tomorrow’s cost, once again, seems to be winning the day… Hiding such actions under the guise of appropriate monetary policy seems to be their modus operandi.

Expediency at tomorrow’s cost won yesterday. It wins today. And we wager our last dollar bill it will win tomorrow.

Tomorrow could just go scratching, says the Federal Reserve. Let tomorrow argue its case to the judge. The needs of today are the needs of today. And we deem them greater.

Greater too is our ambition to avoid the pitchfork, to which the mob will introduce us should we wreck things.

And so it goes…

Expediency at tomorrow’s expense… forever and ever… world without end…