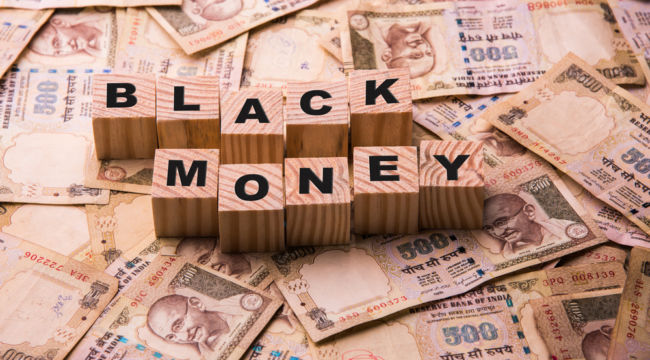 REVEALED: The Odds of Another “Black Monday”

We lower our head… and pause in silent memory…

The Dow Jones plummeted 22.6% that distant “Black Monday”… its largest one-day fall ever.

A comparable blood-spilling today would plunge the index some 5,700 points.

How likely is an encore?

Meantime, the ghosts of October 1987 have the stock market spooked rather hard this month.

As of yesterday’s close, the index has sunk 1,500 points since peaking Oct. 3.

We turn to the mainstream financial media for answers — likely weak answers — but answers.

Reuters, for example, spoons us this apple sauce:

U.S. stocks fell more than 1% on Thursday as the European Commission issued a warning regarding Italy’s budget and concerns mounted over the possibility of strained relations between the United States and Saudi Arabia.

Neither explanation passes our inspection. The market his digested tougher stuff.

MarketWatch supplies its own answer:

Investors continued to weigh minutes of the Federal Reserve’s September meeting, which were viewed as hawkish.

The reference is to Wednesday’s release of the minutes from the Fed’s September meeting.

But the Fed’s hawkishness is news to whom precisely?

Yields on the 10-year Treasury were higher, it is true. But the move was a relatively orderly affair. Markets have by now digested the recent spike that sent stocks careening nearly two weeks ago.

The Dow Jones was up 64 points today. But both the S&P and Nasdaq closed in red numbers.

Maybe stocks are simply out of steam.

Liquidity is running dry. This quarter may represent “peak earnings” for corporations as tax cuts lose their punch. Buybacks too will likely wither for the same essential reason.

Perhaps the worst is yet to come.

Or perhaps cheery earnings reports will keep the show going for a space — the answer eludes us.

We have previously noted that Black Monday was such a miracle of chance, it never should have occurred — in the history of the universe.

Can we therefore exclude the possibility of a sequel?

We cannot expect a once-in-a-4.6-billion-year event to recur within decades or even centuries — or millennia.

One formal property of complex systems is that the size of the worst event that can happen is an exponential function of the system scale. This means that when a complex system’s scale is doubled, the systemic risk does not double; it may increase by a factor of 10 or more… This kind of sudden, unexpected crash that seems to emerge from nowhere is entirely consistent with the predictions of complexity theory. Increasing market scale correlates with exponentially larger market collapses…

But when can you expect another Black Monday?

They ransacked decades of stock market history, both home and abroad, to rig a formula  figuring the frequency of these events.

They conclude you can expect a Black Monday-level event… once every 104 years.

Does that mean you can safely snooze until 2091?

Note carefully that this doesn’t mean a crash this big will occur every 104 years. This instead will be their average frequency over long periods. So it’s possible that we will not experience another 1987-magnitude crash in our lifetimes — or that another will occur today.

Still, you are confident in the odds.

The study concludes one should occur eight days of the next 100 years — roughly once every 13 years.

But as Hulbert reminds, 30 years have lapsed since the last 10% slip.

A 10% one-day fall from today’s heights would represent a 2,500-point hammering.

Only a handful of stocks are pulling the wagon forward today — some one-third of the S&P trades in bear market country.

Institutional investors are loaded up with the draft horses.

If they unload them en masse, who will take up the slack?

If they go amok once the selling begins… maybe you will have your 10% rout.

And who can say it stops there?

All the while, Old Man Time has his eye on the clock… counting away…