The “Retail Apocalypse” Is Here

The strongest piece of proof that the “Retail Apocalypse” could be just days away came on Friday.

The Commerce Department reported that first quarter GDP growth came in at just 0.7%. The report also revealed the slowest first quarter for household spending since 2009.

Some economists call that “stall speed.” After 94 months of the weakest recovery in modern history, there is no other way to describe it.

I generally think short-term GDP and other numbers from the Washington statistical mills are random noise. But this time there is plenty of “incoming data” from the commercial sphere that can’t be dismissed.

I refer mainly to what I call “old reliable.” I’m referring to the tax receipts coming into Uncle Sam’s farebox at the IRS. None of America’s 20 million business tax filers send in withholding taxes for phantom seasonally adjusted payroll slots. Nor do they report estimated payments for profits they do not expect to make.

So when the 12-month moving average of Federal receipts dropped into negative territory for the fourth month running in March, it was another big warning flag. Historically, this has not happened outside of recession.

Even the cheapest financing in modern history can’t apparently keep the vastly overbuilt commercial real estate sector humming indefinitely. After a huge, easy money rebound from the 2008-2009 crash, both commercial loan advances and property sales volumes are now rolling over.

Needless to say, at the heart of the breakdown in the $3 trillion commercial loan market is the ongoing retail Armageddon.

It shows no signs of abating and the recent chapter 11 filing by Payless means that upwards of 3,500 stores will close in early 2017 alone.

Even the Bureau of Labor Statistics (BLS) seems to be getting the word about the horrific condition of the malls. During the last few months, it has reported a 60,000 decline in the seasonally maladjusted job count. And a 758,000 drop in the actual count since the December holiday peak.

By the way, that compares to only a 644,000 drop over December-March during the prior year.

“… retailers continue to struggle and dead malls pile up in characterless suburbs across America.” 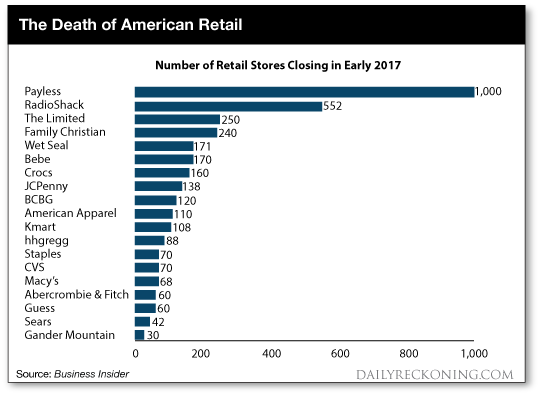 The fact is, other than easy credit fueled auto sales, which are now also rolling over, and Amazon sales, the American consumer has been quasi-comatose for nearly three years.

Reported sales at general merchandise stores in February were no higher than they were some 30 months ago in August 2014 — and I do mean “nominal” sales. Since the Consumer Price Index (CPI) is up 2.8% during the last year alone, inflation adjusted sales are actually already well into recession territory.

More importantly, the plunge in department store sales — which comprise the anchor and driver of 70% of mall traffic — have not abated in the slightest. As of the most recent reading, the monthly sales rate was down 30% from the pre-crisis peak.

Again, that’s in nominal dollars. In real terms, department store sales have fallen more than 50% since the early years of this century. 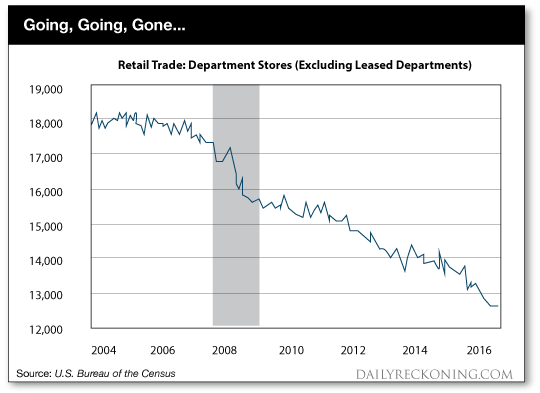 Moreover, what is happening is not merely cyclical in the traditional sense. Debt-encumbered American consumers are terminal. They are dropping, not shopping, because this entire so-called recovery has been wasted. That is, consumers can’t spend energetically because there has been no significant deleveraging since the 2008 crisis.

That in turn means the Keynesian assumption of Washington’s economic policy has again been refuted. That is the belief that consumer spending is the engine of prosperity. In fact, notwithstanding a 5X gain in the Fed’s balance sheet — from $900 billion on the eve of the Lehman meltdown to $4.5 trillion today — our Keynesian central bankers simply could not cause consumers to borrow and spend their way to prosperity.

They are impaled on Peak Debt.

The only significant retail spending growth since the crisis has occurred among the top 20% of households. But history proves beyond a shadow of doubt that when the stock market collapses, the credit cards go back into the wallet.

In fact, there is some pretty stunning evidence that this is already happening — the tail end of the Trump-O-Mania rally notwithstanding. The best data on what consumers are actually doing is provided not by the government statistical mills, but by Bank of America from its massive base of credit and debit cards.

In February, sales at department stores plunged 15% versus the prior year. That’s the largest decline ever recorded.

In a word, the retail mall sector is facing harsh headwinds and the worst of both worlds. That is, flagging demand and immense over-capacity.

It now appears that nearly 150 million of retail square footage could close during 2017 — an all-time record. So in a desperate effort to cope, retailers everywhere are slashing prices, increasing merchandising and promotion expenses in an attempt to fill empty stores with service and entertainment venues.

Call it a massive collision of Amazon/e-commerce with the nation’s hopelessly overbuilt brick and mortar retail infrastructure. But whatever you call it, it doesn’t add-up to “growth.”

To the contrary, it amounts to the grim reaper of economic law finally catching up with the vast malinvestment and waste generated by the Fed’s Bubble Finance regime of the last three decades.

There is far more evidence of a flagging economy where this came from.

That’s right. Not even two dimes of gain during the last 40-plus months!

We not only have an everything bubble and a president who can apparently believe anything on any given day. We also have a financial market giving the notion of a casino an altogether new definition.

Indeed, I think the Donald is about to get Obama’d.

That is to say, if you like his Reflation Bubble, you most assuredly can’t keep it.

I don’t think you could wish for a more attractive exit ramp. And with Trump’s “100 Days” marker now safely behind us, this might well be the last call.