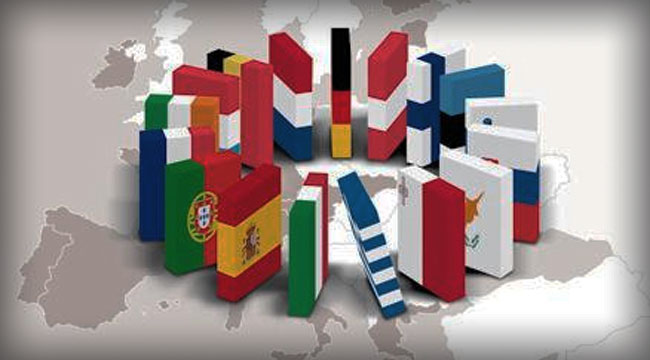 “European Bailout: Deciphering the ‘I’ in IOU”

Bill Bonner wrote this piece about how the overall problem in financial systems the world over is not the fickleness of the marketplace or the stupidity of voters. It’s not even a lack of regulation. It’s debt. Soon the Euro feds (along with their American counterparts) will discover that you can’t cure a debt problem with more debt.

In the wake of the Euro bailout, optimism was cooling. Who has to pay for what? Will it happen at all if some nations vote against it? What exactly is the risk, and how much is it going to cost to protect against it? If the American dollar is an IOU issued by the world’s biggest debtor, than what is the euro? Bill explained that it is an IOU too, but nobody knows who the ‘I’ is.

“Euro Goes off the Deep End”

This brief article featured the below political cartoon: 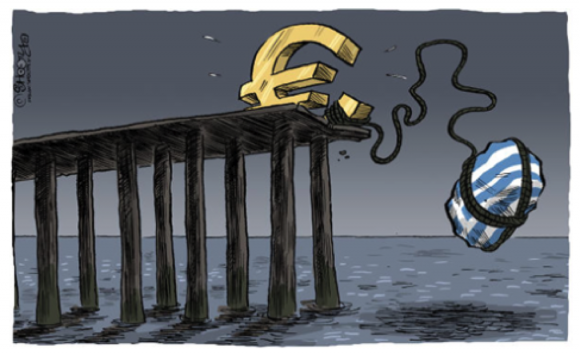 Our editor believed this is what hitching a ride on Greek coattails may look like, with the inner circle nations of the European Union having all gone in (to the tune of a trillion dollars) to rescue periphery states.

This article highlighted an SEC filing in which Goldman disclosed its first-ever “perfect” quarter, having navigated the first quarter without producing even a single day of losses. But, our editor was very skeptical, reminding dear readers that this isn’t possible.

Goldman believed this showed the strength of their customer franchise and risk management, but there seemed to be something very wrong with this picture. Our editor offered an alternative interpretation, that attributed Goldman’s uncanny trading success to the strength of its “political franchise,” subsidized risk-taking and various forms of de facto front-running. Essentially, if we were talking casinos, Goldman would be the house. If you had better luck in Las Vegas than you do with your broker account, something is amiss.

“The Eden Myth and the Ratification Con of 1789”

This article detailed the six acts committed by the new Congress it its first session from March through September of 1789, that signaled the beginning of all the most loathsome attributes of any government: tax, distortion, discord and warfare.

The first was administrative needs like deciding on how oaths of office were to be taken. Fairly harmless. The second to come was the “Hamilton Tariff,” which served to raise revenue. Our editor makes an interesting point here that the second-ever Act of the US Congress was to arrange for the confiscation of property, which ultimately meant the scene was set for internal conflict and years of warfare.

Third was the establishment of “Foreign Affairs,” or what is now the Department of State. It was by these foreign affairs that new government was to execute policies toward other nations. Our editor says that, by establishing this, it was clear there were to be some nations more favored, others less favored, which is ultimately the cause of war and conflict. Congress’s third act was to set the scene for all future external conflict.

Fourth was an Act to to set up a Department of War (currently know as “Defense”), which is pretty logical, to be fair. If you play favorites with other nations, eventually you’re bound to fight some of them. Better prepared than not, right?

Fifth was the Department of the Treasury, which was obviously for taking in and accounting for the collection and spending of money (money confiscated by the second act). The IRS belongs to this department… need we say more?

The sixth action was the “Judiciary Act.” At face value, the purpose was to flesh out Article Three, which said there was to be a Judicial Branch in the new government, as well as establishing Courts (supreme, district, circuit), and government Attorneys. But in addition to all that administrative crap, this act declared that the Supreme Court had the power to hear certain cases with original jurisdiction, and not to be just a court of appeal. Right off the bat, in its first session, Congress deliberately tried to do something it was not empowered to do, granting its sister Branch a power which Article Three never gave it. Give em’ an inch and they take a mile.

“The Gold Rush That Greece has Ignited”

This article featured commentary from MarketWatch regarding the fact that governments around the world were throwing money at the multiple debt crises facing several EU countries. Our editor also discussed euro weakness in the wake of the Greek sovereign debt crisis, and how gold was at new record highs that day, starting at $1,245.

When the EU fund was announced, fears about risks of the Greek crisis spreading a contagion were calmed, but markets remained skeptical about the government’s ability to cut their deficits swiftly.

Our editor believed this was hardly a problem exclusive to the euro — the British pound was troubled by England’s hung parliament, the renminbi was not freely traded, and of course you could count on the American dollar having a sizeable deficit.

“Transocean (NYSE:RIG) – Don’t Throw the RIG Out with the Bathwater”

Transocean refers to the Transocean Discoverer “Inspiration,” a large ship for drilling oil in oceans over 7,000 feet. Ships like this are stronger, can lift more, drill deeper, and find the stuff that’s really hard to find. Inspiration is one of the largest drilling vessels to ever hit the water. This is the future for hydrocarbons and oil.

In the article, King explains that a lot of people were pointing fingers at Transocean because they are either ignorant or have an interest in shifting blame. At the end of the day, he said, BP hired Transocean to drill a well that BP designed, so if Transocean followed procedure, you can’t place blame on them. Ultimately, Byron believes this all comes down to human errors like bad risk management and subpar equipment and technology.

When inflation goes up, everyone wants something that maintains your purchasing power even as the paper currency goes down. Traditionally, that would be gold because you can’t just print more of that.

Gold may not be perfect, Bill mused, but it’s the best thing we have to protect ourselves when consumer prices start going up. Both the euro and dollar custodians decided to sacrifice the integrity of their currencies, just so they could bail out bondholders, which leaves gold as choice number one.

10 Years Ago Today on The Daily Reckoning…

In this article, our editor examined China in two ways; the optimistic standpoint of viewing it as a rapidly growing country filled with opportunity, or as a ticking time-bomb just waiting to destroy itself.

In the long run, it seems China’s rise is inevitable, but in the short run, China had to deal with dangerous internal weakness, like a rotten banking system, poor internal controls, and a dangerous torrent of speculative capital in pursuit of aggressive returns that could boil over the economy and unleash a lot of instability down the road.

There was a split opinion as to whether China will make the full transition to free-market capitalism with its current political system intact. Pessimists think a top-down, statist approach will not mix with free markets. Optimists cite thriving countries like Singapore as an example, where capitalism flourished under Lee Kuan Yew, and an arrangement that may appear statist and authoritarian is more democratic than it looks, due to people willingly endorsing the arrangement. The tradeoff here was stability for prosperity.

This article reported on investor Kirk Kerkorian, who owned 3.9% of GM stock, and offered to more than double his stake in GM and then buy an additional 28 million shares at $31. The stock soared 18% in one day to close at $32.80 (bad time to be short). The following day, the S&P downgraded GM bonds to junk status (bad time to be long).

Our editor believed that anyone who is long GM bonds after the well-documented troubles at the automaker of the previous year must be, in the words of Alan Greenspan, “desirous of losing money.”

Another article from this day, ten years ago, touched on the skidding of GM bonds and the Wall Street rumor mill making noise about several large hedge funds that were reeling from an ill-timed capital structure arbitrage play. Neither side of the arbitrage behaved as anticipated, which caused several big hedge funds to suffer enormous losses.

Many hedge funds were loading up on General Motors bonds, while simultaneously selling short GM stock, betting that GM would limp along and be able to make the interest payments on its bonds. The gamble proved pretty disastrous when both sides of the trade “blew-out” in the wrong direction.

P.S. Time flies when you’re getting swindled by monetary policy! When you sign up for the Daily Reckoning, you can receive timely, relevant, fascinating information like this everyday, getting a chuckle in while you grow your wealth. Did I mention it’s free? Because it is! Sign up here today to start receiving The Daily Reckoning to your inbox, completely free of charge.