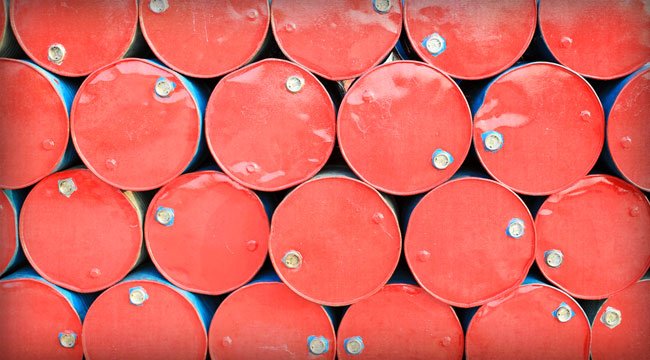 ‘Red’ Is The New ‘Black’ In Saudi Arabia

What a weekend! Thanksgiving, huh? Could’ve fooled me.

On Friday — “Black Friday” for shoppers — oil prices fell to four year-lows, unseen since the post-crash recovery days of 2010. Meanwhile, in trading pits across the globe, panic prevailed and red ink (or “blood,” if the analogy suits you) flowed. For oil, it seems, red is the new black.

What does this mean to investors? First of all, don’t panic.

Yes, share prices tumbled. Last week, broad price mechanisms within oil markets changed dramatically; a major turn after about 40 years of doing things a certain way. This led to confusion about future cash flows and profits, and hence the sell-down.

Over the weekend, the price for West Texas Intermediate (WTI) oil settled down 10%, in the range of $66 per barrel; Brent North Sea oil fell nearly 4%, landing in the $70 range. RBOB Gasoline futures traded down over 9% in one day; while NYMEX Heating Oil lost over 7% in a few hours.

These are stunning panic-price moves, seldom seen outside of, say, outbreak of war, major disasters and/or market crashes.

I’ll give you a random look at some of the sectors affected by the sell-off in the oil price:

In services, the heavy hitters slid. Schlumberger (SLB: NYSE) shares backtracked 7%, to $86; Halliburton (HAL: NYSE) pulled back a whopping 11%, to just over $42. Shares of Baker Hughes (BHI: NYSE), currently in the midst of getting bought by HAL, fell nearly 6%, to $57.

Offshore play Transocean (RIG: NYSE) sank almost 10%, to $21; while Seadrill, Ltd. (SDRL: NYSE) dropped over 8%, to $14 and change — and this in the wake of a pre-Thanksgiving share price pull-back, after cutting its dividend last week.

It’s sure as heck isn’t what I expected; frankly, I expected oil prices to stabilize, and many share prices to begin moving upwards. I’ll cite Clausewitz, “No plan survives first contact with the opponent.” Still, is this the market bottom? Is it time for a bounce-back? Or can it get worse?

Let’s figure it out.

On Oct. 10, I wrote an Outstanding Investments weekly update entitled “Oil War: Saudi’s Petroleum Pearl Harbor.” I wrote it after Saudi Arabia cut oil prices to protect market share in the Far East. In essence, Saudi lowered oil prices, and put world markets on notice that it was backing away from 40 years as the world’s “swing” oil producer.

The Organization of Petroleum Exporting Countries (OPEC) has been around since the 1960s, working to keep world oil supplies stable (meaning relatively scarce), and prices firm (meaning high, for them). Thursday, Nov. 27, as we noted here in The Daily Reckoning, could have been “Black Thursday” for OPEC nations, when OPEC set a supply level and prices found solid level. It’s what I expected… but not what happened.

Last week, mutual interest could have prevailed. OPEC could have cut overall oil output, and in a matter of moments halted a months-long slide in oil prices.

Instead, OPEC ministers met, and failed to agree to cut output. That is, OPEC will continue collectively to lift about 30 million barrels of oil per day, in the face of ample global supply — including new oil supplies from the U.S and (this is important!) elsewhere, such as Brazil, Russia, West Africa and more.

When it comes to energy and money, everything is connected to everything else.

In response, markets sold down crude, and shares in a global array of oil and oil service companies. Looking ahead, at least in the short term, ‘red’ is the new black for OPEC.

“Cutting production is exactly what the oil gurus need to accomplish in Vienna,” we suggested before the OPEC meeting on Thursday. “OPEC needs to agree to production cuts; announce the fact to the world; and stick with it. If this doesn’t happen, then OPEC is filled with the dumbest, crack-smoking stupidest oil ministers on the planet.”

Well, I suppose, at least we now know what some OPEC guys do in their spare time.

To be fair, Venezuela’s OPEC rep seems to be laying off the pipe. He reportedly advocated production cuts; backed up by his Iranian counterpart. Imagine that; Venezuela and Iran preaching economic sanity!

The Saudi oil minister, however, held firm. “Let the markets sort it out,” said the man whose national output traditionally moves markets. Really? After 40 years? “Markets?”

Falling prices will also sting OPEC nations, too; frankly, they all need the money. Take a look at this chart from Citibank, listing “breakeven” prices that OPEC member-nations require to balance national budgets. Even Saudi needs $100 per barrel and more; yet it’s watching the price elevator fall away from that floor. 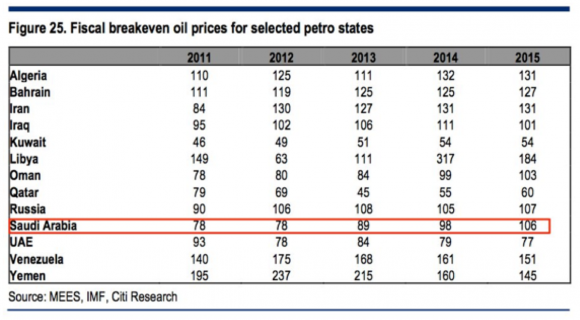 In a world of falling oil prices, we’ll see belt-tightening — and raiding national accounts — in many OPEC lands, and economic ripples across oil patches everywhere else.

For most OPEC nations — where oil IS the national economy — this price-drop will impact all manner of economic and social dynamics. It’s going to be an austere 2015 in many places. Falling oil incomes will compound the fact that many OPEC nations have treated their bounty as if they win the lottery every day; spending oil income to support petro-welfare states. Long story; not here.

In the short term, ‘red’ is the new black for OPEC.

Falling oil prices will impact U.S. and Canada as well. Now that Saudi has more or less defined the price-economics of oil for the next six months (at least), fewer wells will be drilled in North America, and across the globe. Expect to see the U.S.-Canadian oil boom temper. Expect slower development in many other regions, as well, from offshore Brazil and West Africa to Australia and more. Hence the sell-down in oil service plays, offshore and more.

Saudi has slammed on the brakes for world oil pricing. When it comes to energy and money, everything is connected to everything else. We’ll see all manner of ripples from this Saudi action. For OPEC, to be sure, red is the new black.

Still, let me cite no less an authority than Russian president Vladimir Putin. The other day, at an appearance in Sochi, he said, “We are satisfied overall with the situation and do not see anything so extraordinary in what is happening. Winter is coming and I am sure that the market will come into balance again in the first quarter or toward the middle of next year.”

In other words, Putin isn’t panicking; heck, he doesn’t even sound worried.

Ed. Note: The plays in my Outstanding Investments portfolio are poised to benefit even as oil prices head lower. In the email edition of the Daily Reckoning, I gave subscribers a unique chance to access my research service as part of a very special deal. If you’re not currently a subscriber you missed out. Click here now to sign up for The Daily Reckoning for free.