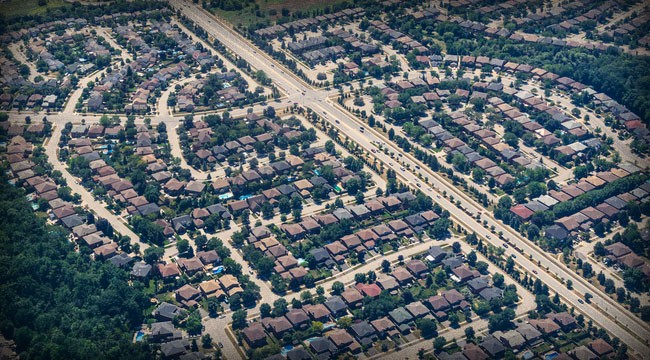 Red Hot Housing Recovery? Not Quite

The pundits have caught up with us. Wednesday’s report on new home sales from the Commerce Department “raised concerns” among economists that the housing market may be overheating. We have been warning that the conditions for this have been present for the past several months.

Ironically, this has been due to the rise in mortgage rates in the second half of last year. That rise is driving a buying panic among those on the bubble–that is buyers who barely qualify for a mortgage and those who might have been undecided about purchasing before rates moved up.

It’s like this in every real estate cycle. I saw the process up close and personal several times during my 22 years in the real estate sales, appraisal, and financing businesses. But buying panics can only last so long. After a number of months, typically less than a year, the demand pool is exhausted. First, volume collapses. Then prices follow.

Mortgage defaults and foreclosures follow. The first to go are the weakest borrowers who got mortgages only because lenders loosened credit at the end of the boom in order to prolong it. Unfortunately for everybody, the good times don’t last, and the very act of approving unqualified buyers leads to the demise of the boom.

Then as prices begin to come down and foreclosed properties get dumped on the market, the jingle mail starts.  Jingle mail is when homeowners whose properties go under water turn in the keys and abandon the home. Or the bank agrees to a short sale in lieu of foreclosure.

We’re not there yet but it’s coming. The current panic buying suggests only that the endgame has begun. It is virtually impossible to accurately predict how long the process will last, but history tells us that once it begins, the process has a limited life.

The U.S. housing market’s red-hot recovery from the depths of the crash five years ago is fueling concerns among economists and real-estate brokers that home prices are overheating.

A dearth of new construction and strong demand from buyers are pushing up prices twice as fast as the rate of income growth, the latest data show, a level economists said is unsustainable.

Yes they are correct to be concerned about overheating. But the rationale they give is laughable. Red hot recovery? Sales on a population adjusted basis have only just reached the levels of the bottom of the catastrophic 1982 recession. That was as mortgage rates were hitting 18%. The sales rate remains below the lowest levels of every recession since 1964.  If that’s a red hot recovery…

It’s not like sales momentum is strong either. The rate of sales increase is the lowest of any recovery since 1964. This has been anything but a red hot recovery. It has been slow. It has been grudging. It has been narrow.  Think about it. 7 years of increasing sales haven’t gotten us much past the lowest levels of the past 53 years. To the Wall Street Journal’s reporters, that qualifies as a “red hot” recovery.

But I’ll let you be the judge. Here’s the entire history of new home sales adjusted for population growth. The truth is that the Fed forced mortgage rates to all time lows and has kept them near those levels for over 4 years and all they got was a lousy souvenir T-shirt, not a red hot recovery. 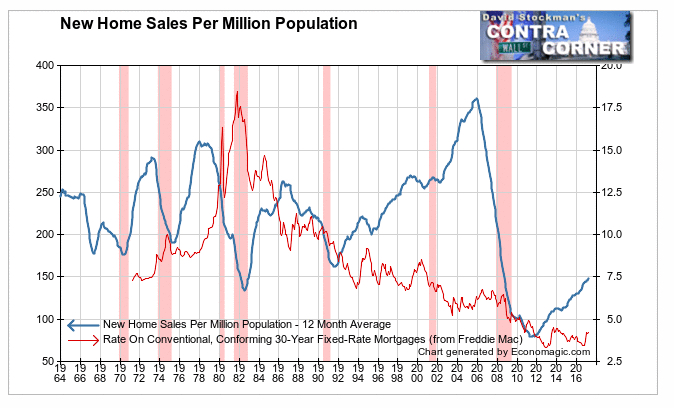 For a different perspective, here’s the total sales versus population growth on separate lines, in other words, the numerator and denominator of the above chart of sales per million people, shown separately. 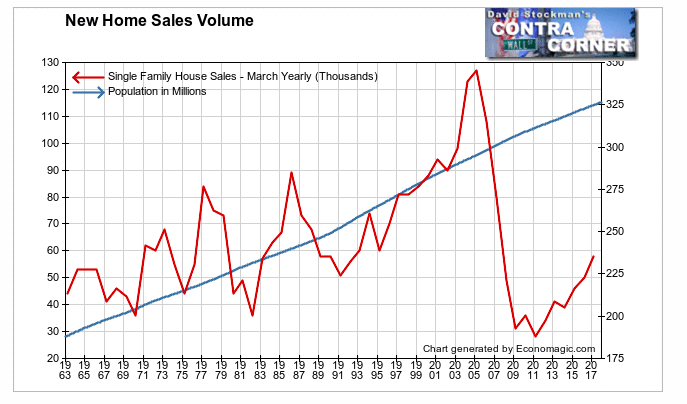 So when pundits caution that sales are only back to 1992 levels, yes, that’s bad, but it’s even worse than they let on. There are 75 million more people, or roughly 37 million more households in the US than there were in 1992.  Something is very wrong here.

What’s wrong is that the new jobs being spawned in this recovery won’t pay the bills. You want to buy a house on the salary from your new job? Fuhgeddaboudit.

The number of new full time jobs is booming. All time highs. It’s a runaway employment boom!  Well not exactly. Yes, there are more jobs. But they come with strings–the strings of low pay.

Look at the rate of home sales vs. the increase in the number of full time jobs. It is deep in the bucket relative to the past. You can see the gap between job growth and new home sales on the top portion of the chart below. The lower graph tells the story. It’s the rate of new home sales per million workers. 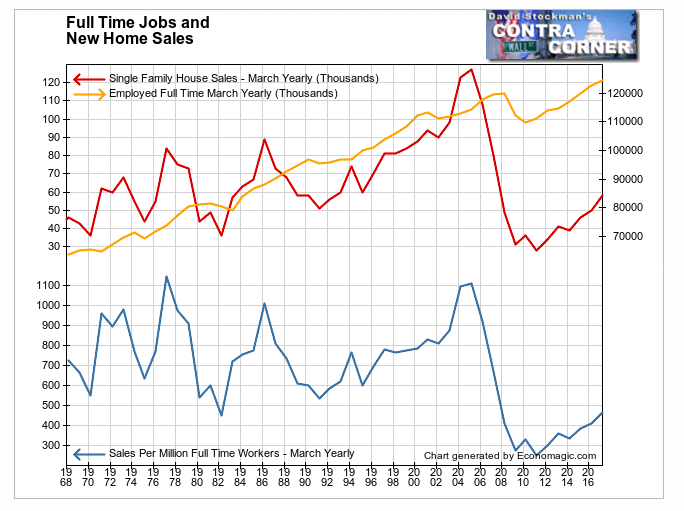 While in a soft rebound for the past 6 years, sales per million workers are in a state of abject collapse relative to the past.  Not just the recent past, but the past 50 years. The recovery from the housing crash has barely returned to the rate of sales per million full time workers seen at the bottom of the 1982 recession.  Why? Because the new jobs don’t pay much.

And home sale prices are going up much faster than the pay on all those new jobs. Obviously something’s gotta give, whether sales, or prices, or both. We’ll look at the price side of the equation, the equation that pundits are just starting to notice, in a subsequent report.

The not funny thing is that, no matter how much that housing inflation exceeds worker pay increases (also inflation), the economic pundits will never, ever, call it what it is.

You will never see the word inflation associated with home prices. But clearly, rising prices that are not accompanied by a like increase in use value are the purest form of price inflation.

If houses are not part of “a rise in the general price level,” as inflation is commonly defined, then those who never see inflation will be right indefinitely. That’s how it is when you live in the delusional world of mainstream Economism.