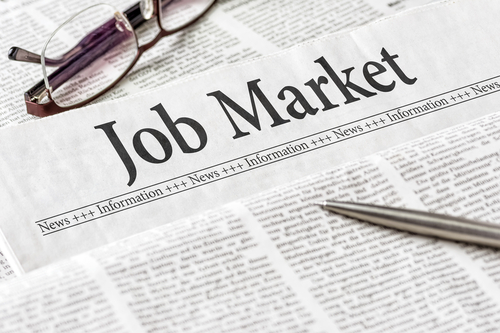 The market was pulled in two directions today… like a wishbone under pressure from two equally determined foes.

The bears, inspired by disappointing news from Apple, pulled in one direction.

The bulls, jaunty after this morning’s jolly jobs report, yanked in the other.

Trade war news — first going one way, then the other — was ready to swing the contest.

Perhaps more importantly… which side lost?

But first, what upset the Apple cart?

Apple offered a below-estimate next-quarter outlook and announced it will no longer provide sales figures for its iPhone and other products.

One Wall Street analyst claimed the announcement could stoke “fears the company has something to hide.”

Another called it a “tough pill to swallow.”

Apple shares were off over 7% at one point today as investors took flight… like a flock of birds at the crack of a rifle.

Like most of the “FAANG” stocks, Apple has come in for rough business lately.

The stock has now fallen into correction for the year.

Next we come to the bullish faction in today’s contest…

The (official) unemployment rate presently stands at 3.7%… the lowest since 1969.

But President Trump would accept no credit for the blowout jobs report. And he strongly disavowed any partisan advantage that may result therefrom:

Wow! The U.S. added 250,000 Jobs in October — and this was despite the hurricanes. Unemployment at 3.7%. Wages UP! These are incredible numbers. Keep it going, Vote Republican!

Here the president refers to the two recent hurricanes — Florence and Michael — that many analysts warned would skew the data.

But we might caution Mr. Trump against premature celebration…

As we have illustrated before, sub-4% unemployment is no cause for chest-thumping. History indicates that recession is never far behind when unemployment dips below 4%.

Finally we come to trade news, the makeweight in today’s wishbone-pulling bout.

Stocks surged these past few days, partly on Trump’s comments that discussions with China were “moving along nicely.”

But late-morning comments from Trump economic adviser Larry Kudlow set things going the other way… and gave strength to the bears:

“There’s no massive movement to deal with China.”

Kudlow added he was “not as optimistic” about a deal as he had been.

The wishbone snapped… and the bears were left holding the winning half.

The bulls — and stocks — were immediately put to rout.

And so, alas, October’s stock market trouble spills over into November.

Not even a record jobs report could win the day.

“In November you begin to know how long the winter will be,” said journalist Martha Gellhorn.

Investors had better hope the stock market warms up this month…