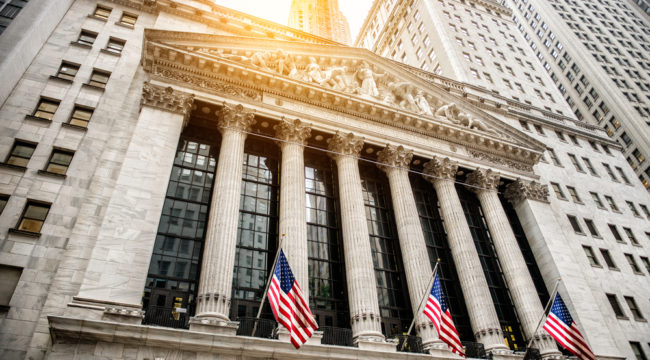 None of the above has slowed gravity-defying markets.

We offer one possible reason today.

Hint: It’s not the Fed. It’s not renewed expectations of Trump stimulus. And it’s not the threat of peace.

Stocks soared on the rising thermals of investor optimism once again.

After closing more than 200 points higher yesterday, the Big Board’s up another 232 today.

And for the first time ever the Nasdaq’s cracked 6,000.

Today’s excitement seems based on the fact that McDonald’s and Caterpillar beat first-quarter earnings expectations.

In the absence of an agreement, funding for Uncle Sam Inc. expires at 11:59 p.m. this Friday.

Trump insisted any deal must include funding for “the wall.”

But funding for the wall was simply out of court as far as Democrats were concerned.

Or at least agreeing to delay the wall’s funding to September (when he’ll probably cave again?).

So a deal before midnight Friday seems likely. No government shutdown.

But what if the primary reason markets have soared 12% this year… has nothing at all to do with Trump… or even the Fed?

After all, Trump hasn’t come through.

And the Fed’s finally removing the punch bowl after years of quantitative easing and other spirituous liquors.

But this you must understand…

And according to Hartnett, foreign central banks like the European Central Bank (ECB), the Swiss National Bank (SNB) and Bank of Japan (BoJ) have been pouring the booze this year like there’s no tomorrow.

He says foreign central banks have bought an eye-watering $1 trillion of financial assets — stocks and bonds — just in the first four months of 2017 alone.

Hartnett argues this ongoing “liquidity supernova” — his term — has goosed the markets by suppressing bond yields and supporting stocks.

And it best explains why global stocks and bonds have both attained annualized double-digit gains so far this year.

That is, not because of Trump. Or the Fed…

But because of foreign central banks and their “liquidity supernova.”

Hartnett calls it “the $1 trillion flow that conquers all.”

If true… that trillion-dollar flow has conquered a heap of geopolitical tensions (North Korea, Syria) and those diminished expectations for U.S. president No. 45.

And that $1 trillion flow could swell to a $3.6 trillion tsunami if the central banks carry on at this gait the rest of the year.

That means 2017 could see, as Hartnett phrases it, the “largest central bank buying in past 10 years.”

When central banks undertook the greatest monetary experiment in history.

But after all these years… how much longer can it continue?

And shouldn’t markets be sure-footed enough by now to go it on their own hook?

But the entire notion of central banks buying stocks or corporate bonds or any other private asset strikes us as a dippy thing.

With behemoth central banks putting their thumbs so heavily on the scale… it well and truly means the end of free markets.

What’s left of them, that is.

But as shocking as we find it all…

The only thing that really shocks us after eight years in the monetary twilight zone… is that anything can still shock us.