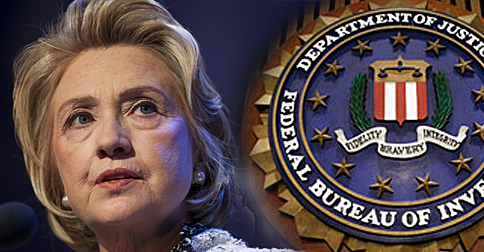 The Real Reason the FBI Moved on Hillary…

In a shocking twist in the case, agents investigating former congressman and resident pervert Anthony Weiner for “sexting” with a minor recovered one of his laptops containing thousands of emails…

Among them were State Department-related emails from Weiner’s estranged wife, Huma Abedin, a close aide to Clinton and a subject of the original investigation.

This startling discovery jolted Comey into action just days before the election, turning the presidential race on its head.

It doesn’t matter if you’re a Republican or Democrat, this move is important because it could lead to a lot of market volatility in the next couple of weeks.

I’ll show you the best way to deal with that volatility in just a moment.

But first, let me show you how the media missed the real story…

Why Comey Did It…

Predictably, Comey’s move made Clinton and her comrades in arms in the mainstream media go nuts.

They had called Comey, who was nominated by President Obama, a paragon of integrity and virtue when he let Clinton off the hook just a few months ago.

But now he was instantly relabeled a partisan hack trying to singlehandedly decide the election in Trump’s favor.

You see, The New York Times reports that these new emails were discovered by New York-based FBI agents weeks ago.

So why the delay in announcing it? Well, that’s where things get really interesting…

According to The Wall Street Journal, the New York agents notified FBI deputy director Andrew McCabe of their blockbuster findings on October 3.

But they couldn’t access the emails they found because searching through them wasn’t covered under their existing warrant for Weiner.

They needed a new warrant. So what did McCabe do?

Nothing. He sat on his hands. He never requested one. And nothing happened for weeks.

Why is this so important?

Well, McCabe is the FBI official who oversaw the initial Clinton email investigation.

He’s come under fire recently because his wife received $500,000 while running for the Virginia state senate from the political action committee (PAC) of longtime Clinton ally and current Virginia governor Terry McAullife.

Clinton herself headlined a major fundraiser for that same PAC shortly before the group steered the cash to McCabe’s wife.

So Mrs. McCabe received a huge sum of money from a close Clinton ally around the same time Mrs. Clinton was under an investigation led by Mr. McCabe.

It’s therefore no shock to anyone who hasn’t had a full-frontal lobotomy why McCabe was in no rush to request a warrant for access to emails that may derail Clinton’s ambitions before Election Day.

According to The Wall Street Journal, the only reason why a warrant to was eventually requested in recent days was because “a member of the [Justice] department’s senior national-security staff asked for an update on the Weiner laptop. At that point, officials realized that no one had acted to obtain a warrant.”

Look, Comey’s not stupid. The Washington Post reported that he was only notified of the discovery of these new emails last Thursday.

He knew the guy running the Clinton investigation was likely dragging his feet until after election.

He also knew that if he did nothing given this new discovery and it turned up damning evidence against Clinton, Republicans would rake him over the coals for taking part in a conspiracy.

So he did what any bureaucrat would do in that situation: He covered his you know what. He notified Congress of the new discovery, which let the cat out of the bag.

The stock market in the short term didn’t like Comey’s move. Stocks dipped when the news hit Friday afternoon.

Polls had strongly indicated a Clinton victory over Trump. Those ever-so-bright analysts that keep Wall Street rolling said markets had already priced in that outcome.

But with this bombshell, all bets are off. Markets don’t like uncertainty.

One thing that is very clear to me: There will be more surprises before Election Day. Who knows what Julian Assange or hacker Kim Dotcom have up their sleeves.

There are only 8 days left. That means the most scandalous opposition research dumps are likely still to come for both candidates.

I have already seen trolls on my Facebook page floating truly sick accusations with zero evidence. People will say anything right now to win. It’s as if morals and ethics just permanently exited.

And that means we’ll see more market volatility like we saw on Friday.

Trying to predict the next shoe to drop and the market’s reaction to it is a fool’s errand. You’d be crazy to try.

The only reliable way to maintain your sanity right now while making money in the markets is to ride the trends with your stop losses set.

Things are about to get nuts.