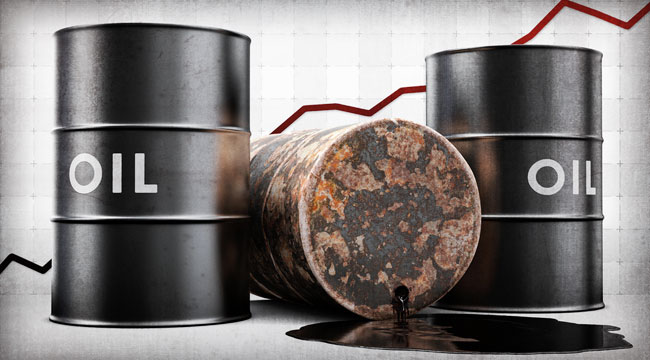 The Real Black Friday: When Oil Prices Begin to Climb

If your town is like mine your daily newspapers and local news programs have been filled with ads for “sales” this coming Friday — the day retailers turn the corner from being “in the red”… to posting profits for the remaining of the fiscal year. Thus the perennial American obsession with “Black Friday”.

My email box has been filled with notices from stores, telling me about “bargains.” All I need to do is hop in my car, fight traffic and crowds, get inside the front door by dark-thirty, a.m. and spend myself broke while “saving” money.

It’s all about spending money, right? A national pastime. And this year the Great American consumer is emboldened by cheap gas. The national average today is $2.81. In Pittsburgh I’m paying $3 and change per gallon. Sweet.

Let me suggest an alternative fixation for you. We can call it Black Thursday.

That’s my version of Black Thursday. It’s when OPEC nations will find a way to move oil prices upwards…

By the time you roll out of bed to greet the dawn tomorrow morning, OPEC will be winding up its semi-annual meeting in Vienna. I expect OPEC honchos to walk out and announce that they’ve agreed to cut production to support the oil price.

If that happens, oil prices might spike up by $10 per barrel or more on speculation.

Then, after tomorrow, the oil price “ought” to begin a slow recovery. It may stabilize for a time, over the next couple of weeks, as OPEC dust settles and traders unwind all manner of plays. Then, as production cuts gain market traction, the price of oil should move beyond $80.

That’s my version of Black Thursday. It’s when OPEC nations will find a way to move oil prices upwards, and bring their national budgets back into the “black,” so to speak. Enjoy those cheap pump prices while you can.

Politically speaking, a reduction in Mid-East production is exactly what the oil gurus need. OPEC needs to agree to production cuts; announce the fact to the world; and stick with it. If they don’t, well then OPEC is filled with the dumbest, crack-smoking oil ministers on the planet.

At the current pace, without production cuts, oil will continue to fall, perhaps into the $60 per barrel range. Considering what’s at stake — financially and socially — for many OPEC nations in a time of low oil prices, perhaps home authorities ought to arrest their incompetent oil ministers, charge them with treason and “economic crimes against the state,” line them up against a wall and shoot them. “Pour encourager les autres,” as the French like to say.

That said, even if the OPEC ministers don’t act in their own best interests, the move toward energy independence in the US rolls on.

The economics of the fracking revolution in the US are changing the game.

Oil at $80 and under will undoubtedly squeeze some operators at the margins. Low oil prices make it harder to fund some high-priced projects. Lower oil prices will likely lead to a modest slowdown in oil patch expenditures. Some wells won’t get drilled; but $80 oil does not derail the trains.

The economics of the fracking revolution in the US are changing the game. I was talking with an oil company rep, for example, who works in the nearby Marcellus region of Pennsylvania, and Utica play of Ohio. I asked about “low natural gas prices,” and he laughed.

“Low gas prices?” he said “On many wells, we’re producing dry gas for under $1.00, and still making great money even though wellhead prices suck.”

The company’s wells produce “dry” methane gas, without valuable natural gas liquids (NGLs) in the vapor phase. NGLs are, in essence, “oil.” When NGLs come up the pipes, that’s nice money in the operators’ pockets. Not with these wells, though. It’s dry gas.

Even at a bargain-basement $2.75 per thousand cubic feet (mcf) at the wellhead, they’re making good money, selling dry gas produced for under a buck. Nice work, if you can get it. Nice economics for a rebounding American energy industry.

With this in mind, between mouthfuls of turkey and mashed potatoes with gravy, keep one eye the news tomorrow. Feel free to watch Macy’s Thanksgiving Day Parade, football games and reruns of It’s a Wonderful Life. Enjoy time with your family and friends. Heck, go out and do some shopping, with all that cheap gasoline in your tank.

Along the way, however, watch news out of Vienna. If OPEC has its act together, we’ll see production cuts and oil prices will stabilize and begin to rise. If not, I wouldn’t want to be an OPEC oil minister, because it’s going to be a long flight home.

That, and my life expectancy would be plummeting.

P.S. The plays in my Outstanding Investments portfolio could benefit whether OPEC cuts production or not. And in The Daily Reckoning email edition, I gave readers a unique chance to access my research service as part of a very special deal. If you’re not currently a subscriber you missed out. Don’t let that happen again. Click here now to sign up for The Daily Reckoning, for FREE, before you do anything else today.