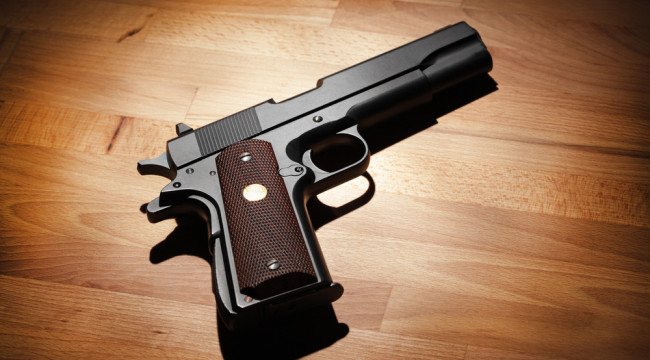 If you thought Defense Distributed’s 3-D-printed gun looked a little less than menacing, but were interested in what the technology had to offer, look no further. A company called Solid Concepts Inc. just produced a near-perfect 1911 semi-automatic pistol using 3-D printing technology.

The gun is made almost entirely out of steel parts that were cut with a laser on a new kind of 3-D printer. The creators successfully fired 50 rounds from it without a problem.

Congressmen such as Steve Israel who were apoplectic over Defense Distributed’s overheating plastic version, which reportedly started melting after a few rounds, are really going to love this.

Not to worry, says Scott McGowan, Solid Concepts’ VP of marketing: The technology is more expensive than plastic 3-D printers and requires considerably more technical skill to use. This should keep the general public away for quite some time.

Doomed! That’s likely what arms manufacturers will declare if this starts eating into their profits… never mind that hobbyists have been home-manufacturing working firearms for generations. It will be fun to watch them side with the government against the NRA as 3-D-printed guns becomes cheaper to produce and higher in quality.

P.S. Readers of The Daily Reckoning email edition get some great tips on the latest plays in the technological field. Don’t miss out on tomorrow’s gains. Click here now to subscribe.

Fortune and Glory From Blockchain's Most Important Moment

2018 feels like 1994 all over again. The reason… blockchain tech. We’re on the brink of something unprecedented. A “Netscape moment” is closing in on us and early movers will make incredible fortunes.