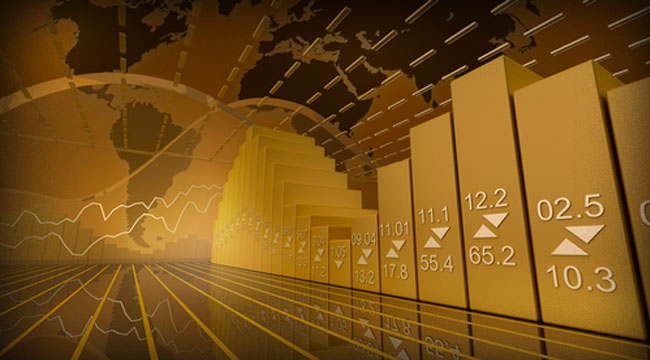 We drew upon analyst Russell Napier’s 2006 book Anatomy of the Bear in preparing our 2011 report on whether the bear market was nearing an end. Not exactly beach reading… but he does a masterly job pinpointing the factors at play at those moments when secular bear markets end… and secular bulls begin.

The bear market cycles identified by Napier don’t line up in lock step with our “fearsome foursome” chart, but after the crash of 1929, they line up almost perfectly. The inflection points Napier describes — when bear turns to bull — are in 1921, 1932, 1949 and 1982. And based on those previous market cycles, Napier’s book projected the next turn would come in 2014 — next year. (Which lines up with the 14½-year average for secular bear markets.)

But oh, what a wild ride we’d be in for between now and then. In a November 2012 presentation, Napier did not project a date… but he did say for the market to reach valuation levels equal to those earlier turning points, the S&P 500 index — currently above 1,500 — would crash to 450.

Ouch. That implies a Dow in the neighborhood of 5,000 — in line with David Rosenberg’s forecast.

We beg to differ. Aside from the recurring pattern of lows smack in the middle of a secular bear — i.e., 1974 — we’ll cite Napier’s most compelling evidence. It’s the q ratio, or “Tobin’s q.”

This number is the brainchild of Nobel laureate James Tobin: Take the total market value of a company, then divide it by the replacement value of its assets (in other words, how much you’d pay to build the company from scratch).

You can apply the q ratio to a company or the entire stock market. Here’s our 2011 chart, updated to the present courtesy of Doug Short at Advisor Perspectives:

We’re struck by the stratospheric reading the q ratio reached at the end of the 1982-2000 bull market — far, far higher than previous tops during the 20th century. We think it’s no accident. We think it’s the consequence of Alan Greenspan’s tenure at the Fed and his habit of loosening the monetary spigots at even the faintest hint of a crisis…

Couple that with all the money printing Greenspan and Ben Bernanke have done since 2000… and we suggest the q ratio might be moving up in a new long-term channel.

So what does that mean for the Dow, and gold and the ratio?

As we’ve written, we think the bottom is in. The level of 6,547 set four years ago this month will never be revisited. Beyond that, it becomes much harder to say. And once again, the Fed is to blame: Mr. Ritholtz says the Fed’s policies since the Panic of 2008 are a “wild card.”

Zero interest rate policy and quantitative easing “make it difficult to think of most gains as completely organic,” he says. “It also has made any comparisons to prior secular bull markets more challenging, as it introduces another variable.

“Under ordinary end-of-secular-bear market conditions,” he goes on, “I would like to see P/E ratios even lower and stocks even more hated/ignored. The Fed has disrupted those metrics, and that makes seeing the end of the secular bear all the more challenging.

“If you want a more specific forecast date for when I think it will end, my best guess is sometime between next Tuesday and 2017.”

We’ll stick our necks out a bit more in light of the Dow’s performance during previous secular bears, even as we acknowledge Barry’s caveat that we have “a decidedly small sample set” from the past century.

We reprise a chart of the bears and the bulls we published yesterday. In each of the last two secular bears, the Dow has a ceiling. We’re bumping up against the ceiling right now.

Look for a 20-25% downdraft sometime between next Tuesday and 2017. We have every expectation that the boomers who got sucked into stocks in the late ’90s… and again around 2004-05… only to get kicked in the teeth both times… and who are only now re-entering the market… will get kicked one last time.

That’s our forecast. We’ll keep you updated from now through 2017.