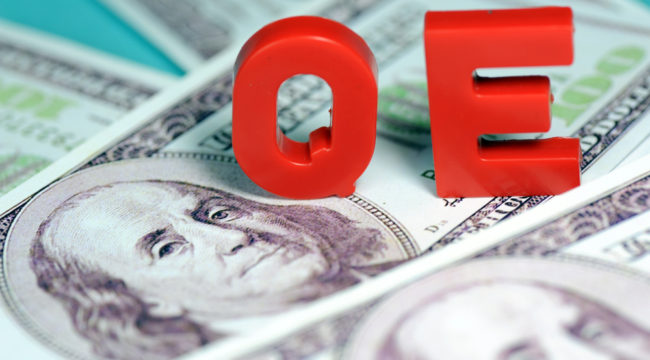 QT1 Will Lead to QE4

There are only three members of the Board of Governors who matter: Janet Yellen, Stan Fischer and Lael Brainard. There is only one Regional Reserve Bank President who matters: Bill Dudley of New York. Yellen, Fischer, Brainard and Dudley are the “Big Four.”

They are the only ones worth listening to. They call the shots. The don’t like dots. Everything else is noise.

Here’s the model the Big Four actually use:

2. Take a “pause” on rate hikes if one of three pause factors apply: disorderly asset price declines, jobs growth below 75,000 per month, or persistent disinflation.

3. Put balance sheet normalization on auto-pilot and let it run “on background.” Don’t use it as a policy tool.

What does this model tell us about a rate hike in December?

Disinflation has been strong and persistent. The Fed’s main metric for this (core PCE deflator year-over-year) has dropped from 1.9% in January to 1.4% in July. The August reading comes out on September 29. This time series is moving strongly in the wrong direction from the Fed’s perspective. This is what caused the September “pause” (which we predicted for readers last March).

After seven months of decline, one month of increase, if it comes, will not be enough to get the Fed to end the pause. It would take at least two months of increases to change the Fed’s mind.

That’s unlikely given the impact of Hurricanes Harvey and Irma. Those effects may be temporary, but they come at exactly the time when the Fed was looking for a turnaround in core inflation. They won’t get it. The pause goes on.

How do I know this?

For one thing, the Fed explains this all the time. It’s just that the media won’t listen; they’re too busy chasing dots.

But this was also explained to me in detail by the ultimate Fed insider. I call him, “The Man Without a Face,” and I identify him by name in chapter six of my New York Times bestseller, The Road to Ruin.

It’s true that Stan Fischer is leaving the board soon, but the White House has been in no hurry to fill vacancies. The Big Four will still be The Big Three (Yellen, Dudley and Brainard) when the December meeting rolls around and the analysis will be the same.

Eventually the markets will figure this out. Right now, markets are giving a 70% chance of a rate hike in December based on CME Fed Funds futures. That rate will drop to below 20% by Dec. 13 when the FOMC meets again with a press conference. (There’s another meeting on Nov. 1, but no one expects any policy changes then).

Eventually, the amount of securities they don’t roll over will go up until the balance sheet controlled by the Fed comes down to the targeted figure. The projection is that it could take five years to achieve. The problem is we might not make it that far before the entire system collapses.

We’re in a new reality. But the Fed doesn’t realize it.

Here’s what the Fed wants you to believe…

This is complete nonsense. They’ve spent eight years saying that quantitative easing was stimulative. Now they want the public to believe that a change to quantitative tightening is not going to slow the economy.

They continue to push that conditions are sustainable when printing money, but when they make money disappear, it will not have any impact. This approach falls down on its face — and it will have a big impact.

Markets continue to not be fully discounted because they don’t have enough information. Contradictions coming from the Fed’s happy talk wants us to believe that QT is not a contractionary policy, but it is.

My estimate is that every $500 billion of quantitative tightening could be equivalent to one .25 basis point rate hike. The Fed is about to embark on a policy to let the balance sheet run down.

That would be the equivalent of half a .25 basis point rate hike in each of the next two years in addition to any actual rate hikes.

While they might attempt to say that this method is just going to “run on background,” don’t believe it.

The decision by the Fed to not purchase new bonds will be just as detrimental to the growth of the economy as raising interest rates.

The Fed’s QT policy that aims to tighten monetary conditions, reduce the money supply and increase interest rates will cause the economy to hit a wall, if it hasn’t already.

The economy is slowing. Even without any action, retail sales, real incomes, auto sales and even labor force participation are all declining. Every important economic indicator shows that the U.S. economy is slowing right now. When you add in QT, we may very well be in a recession very soon.

Because they’re getting ready for a potential recession where they’ll have to cut rates yet again. Then it’s back to QE. You could call that QE4 or QE1 part 2. The Fed has essentially trapped itself into a state of perpetual manipulation.

The problem continues to be that the stock market is overpriced for this combination of higher rates and slower growth.

The one thing to know about bubbles is they last longer than you think and they pop when you least expect it. Under such conditions, it’s usually when the last guy throws in the towel that the bubble pops. We’re not there yet.

Is this thing ready to pop? Absolutely, and QT could be just the thing to do it.

I would say the market is fundamentally set up for a fall. When you throw in the fact that the Fed continues to have no idea what they’re doing, and has taken a dangerous course anyway, I expect a very severe stock market correction coming sooner than later.

As market perceptions catch up with reality, the dollar will sink, the euro and gold will rally, and interest rates will resume their long downward slide.

Do you have your gold yet?