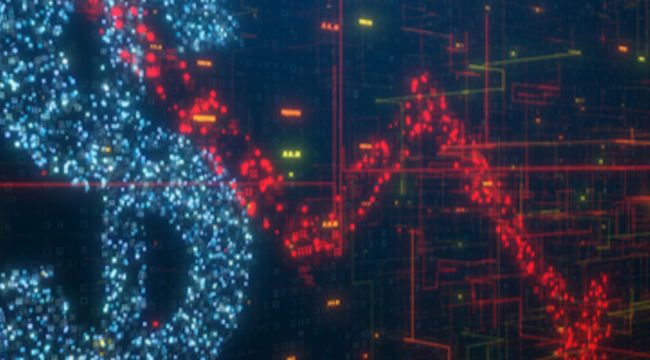 The president hollers that Jerome Powell “must stop the crazy quantitative tightening.”

That he will do come September… when the Federal Reserve has a final go at its balance sheet.

But has Mr. Trump just signed on — unknowingly — to a $300 billion round of quantitative tightening?

In words other… is the debt ceiling agreement a disguised quantitative tightening?

And can markets endure $300 billion of quantitative tightening?

Today we roll back our shirtsleeves, spit upon our hands… and attempt to sort things through.

First, one final glance at Wall Street before setting to work…

A Mixed Day on Wall Street

Today’s trading was plus and minus.

For reasons, look no further than behemoths Boeing and Caterpillar.

Meantime, Caterpillar has been badly used by the trade war. And its second-quarter earnings, reported today, disappointed expectations.

Caterpillar stock gave back over 4.5%.

Return we now to the question under investigation:

Is the debt ceiling agreement a $300 billion quantitative tightening in disguise?

We proceed from the facts…

Absent an agreement, Washington would have to scratch by without additional borrowing.

Thus deadbeat Uncle Samuel has been forced to rummage his pockets and ransack the couch… in search of spare money.

Ah, but the United States Treasury maintains a checking account with the Federal Reserve.

Money in this account has kept the lights burning… and satisfied the government’s infinite spending obligations.

As he notes, this spending represented a form of quantitative easing.

And this QE washed out the Federal Reserve’s official QT:

This has been a net injection of money into the U.S. economy. It is akin to QE and has overwhelmed the effects of quantitative tightening (bond sales) by the Fed pulling in the opposite direction. Or put another way, it has masked the underlying withdrawal of dollar liquidity.

Why a Debt Ceiling Deal Was Critical

Perhaps this QE explains — in part — the market’s rising tide since spring?

We must consider the possibility.

But after months of paying out, Treasury’s account runs low.

It may have been cleaned out by September at the going pace.

That is why the president and his understrappers sweated so heavily for a deal.

Yesterday’s agreement boots the beer can clear down the road to 2021 — right past the election.

The government can once again borrow against the future, squander more money… and plunge deeper into debt.

Thus today there is more joy in heaven.

But do not bite into the celebration cake. Beneath the sugary and gaudy icing lies a poison…

Treasury’s QE Is About to Become QT

Treasury must now restore its account balance at the Federal Reserve.

It will have to borrow some $300 billion to make the shortage good.

All the liquidity Treasury emptied into the system since March… it will drain right back out.

That is, Treasury will soon undertake a $300 billion round of QT.

The Treasury will need to build back up its checking account balance at the Fed. This means issuing enough debt over the next few months to not only cover ongoing expenses, but also enough to add back the [money] it has withdrawn from its checking account so far. The extra issuance of debt is kind of like quantitative tightening in that it removes liquidity from the system.

If Treasury’s previous QE rode over the Federal Reserve’s QT… why shouldn’t its QT pack equal wallop the opposite way?

And recall — the Federal Reserve’s own QT runs through September.

A Double Jolt of QT

The final two rounds will drain out an additional $70 billion of liquidity.

Combine the two QTs and we are driven to conclude:

Plenty of liquidity is coming off duty in the months ahead.

Former colleague David Stockman estimates it will drain away at a $1.5 trillion annualized rate.

“Stated differently,” David adds, “that’s equivalent to full-bore QE in Bernanke’s glory days… except in the opposite direction!”

But what about the stock market… and the economy?

Are they ready for a blistering drought, Mr. Evans-Pritchard?

A higher debt ceiling has potent implications for Wall Street and dollar liquidity. It could cause a financial squeeze and tremors across the credit system.

Once there is a deal the Treasury will rush to rebuild its cash buffers by issuing a blizzard of bills. This sucks money back out of the economy. Think of it as reverse QE.

Such effects would be transmitted instantly through the global financial system via the vast off-shore dollar lending markets. So be alert.

Indeed, we will be. But we are not certain Wall Street will.

It is too dizzied by the promise of a rate cut next week.

But recall the joint QTs…

They will siphon out vastly more liquidity than a 25-basis-point rate cut will shower in.

But if the outgoing tide takes markets out with it, Jerome Powell might open the faucets all the way.

Maybe plunging markets will force him back to QE by October… or November.

And let us hazard this prediction: