The headline from Russia is that president Vladimir Putin has named his preferred successor.  But the real story is that he's finally taken sides in a long-standing power struggle centered within Russia's energy industry. 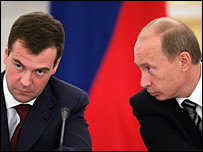 By choosing of Dmitry Medvedev, Putin has sided with the factions controlling the Russian gas giant Gazprom, instead of those in charge of oil giant Rosneft.

As noted in a DR White Paper prepared earlier this year by our friends at Stratfor:

For these teams the Gazprom/Rosneft tussle is more than simple one-upmanship; it is the most clear-cut and public means of evaluating who is doing better at consolidating power.

Still, as the White Paper pointed out, Putin is striving mightily to avoid giving one faction too much of an upper hand.  Look for more intrigue and machinations leading up to the presidential election next March.