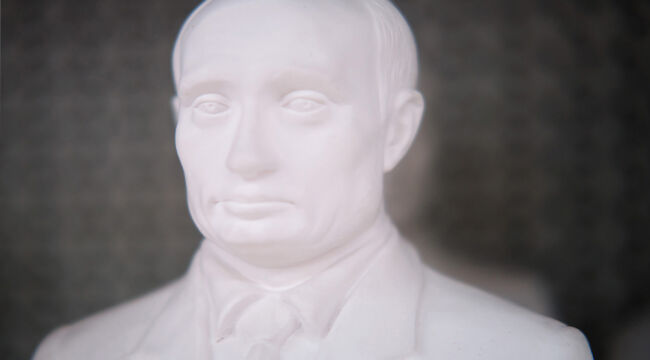 We recently nominated Mr. Vladimir Putin for a Nobel Prize. Today we elevate him once again, to a roll of honor higher yet.

That is, we nominate him for membership in the canon catalog of saints…

He suffers the blackened reputation of a brutish and even homicidal fellow — a reputation hard earned, it is true.

Yet he has performed something of a miracle; hence our nomination. He has succeeded in uniting the clashing factions of American politics as none other.

Again, it is a sort of miracle. Who but Vladimir Putin could manage the feat? Nothing less than canonization would compensate him adequately.

Against the abominable Russian we are one, a granite bloc.

As Melville wrote of Appomattox, “The warring eagles fold the wing.”

To our progressive friends on the political left, Putin is mere a proxy for the co-villain Trump.

Trump is Putin, Putin is Trump. These two demoniacs conspired to secure the 2016 presidential election — a sin against American democracy.

What is more, the Russian autocrat is modernity’s mortal foe. He is against homosexuality, transgenderism and, most likely, critical race theory.

He is the living saint of white supremacists, Klansmen, Oath Keepers, the Michigan militia and Trump boosters.

Rumors even swirl that Mr. Putin was present at the United States Capitol on Jan. 6, 2021… where he fomented insurrection on behalf of Donald Trump.

Our agents have presented photographs in support of this claim — yet they lack the resolution to form conclusive evidence.

It remains a mystery to this day.

Back to the Good Old Days

To our conservative friends on the political right, Vladimir Putin resurrects the “evil empire” that united the nation for lo so many years.

It transports them back to the high and glorious Reagan years.

Conservatives get to yell about Russian aggression, defending freedom against evil, the shining city atop the hill, the necessity of United States leadership, American exceptionalism — and increased defense budgets — to name some.

Yet we might remind these gentlemen that today’s Russia is a sad caricature of a superpower. commentator Ed West:

Russia is dying. In just the first week of Putin’s war, the country lost somewhere between 2,000 and 6,000 men, according to Western sources [presently approaching 15,000 or more], an immense and needless tragedy for the poor families left behind to grieve.

Whether those in the Kremlin will weep for them, they must shudder at the thought that in the average week the country loses another 2,000 through population decline, a rate that rose to 20,000 during COVID. But even in normal periods, Russia is now shrinking by more than 100,000 people a year and with no prospect of raising fertility above the 2.1 total fertility rate (children-per-woman) replacement threshold.

The incomprehensible thing about this war is that Russia is not a belligerent young nation in need of expansion; it is not filled with frustrated young men hoping to assert themselves in conflict, as with Syria, Afghanistan or the world’s other conflict zones; it is already elderly, aging quickly and in some parts heading for oblivion. Some 20,000 Russian villages have been completely abandoned in recent years, and 36,000 others have fewer than 10 inhabitants left and will follow them soon. A third of land once farmed in the former USSR has now been abandoned.

If the Russians turn out to have no stomach for this fight, it will probably be for the simple fact that the country does not have enough men to spare.

It is true. Russia is in a perilous state of demographic decay.

The question must weigh heavily upon Vladimir… and poison his fitful sleep each night.

Yet what Russia lacks in men it compensates for in arms — namely, atomic arms.

Sources estimate Mr. Putin roosts atop some 6,000 nuclear warheads, a hen atop her eggs.

He likewise commands a formidable assembly of intercontinental missilery, bomber aircraft and underwater craft to hurl them at the United States.

The United States has little ability to swat them away.

We Must Be Prepared to “Unleash Hell” Upon Russia

Yet last night a Fox News host shrieked that the United States and its NATO allies must prepare to “unleash hell” upon Russia if its abominable leader lets loose chemical or biological agents in Ukraine.

It is our sincere hope that Russia’s abominable leader does not let loose chemical or biological agents in Ukraine.

It would stand contrary to all laws of civilized warfare, such as they are. The very angels would weep.

We hold out no simple solution. If Mr. Putin does spit these heinous substances at Ukraine, we do not know the appropriate response.

Yet if the United States and its NATO allies unleash hell upon Vladimir Putin, we bet high that a good deal of hell will be coming back the other way.

Too Close to Home

As we keep our being in the United States — and not far from its capital — it is likely that hell will come dropping in.

Should Russian nuclear forces earmark an atomic warhead for the United States Naval Academy, the merest navigational error could send a rather nasty present down upon our head.

We appreciate the Fox host’s zeal. Yet has he given the full weight of consideration to his policy prescriptions?

We are not certain he has.

We monitor both “conservative” and “liberal” news media to watch them fight.

Yet on Russia there is no light between them. To hear one is to hear the other – with very few exceptions.

And so once again we nominate Vladimir Putin for admission to the canon of saints. The man is a maker of peace, a unifier of men. He has brung the riotous factions together.

If the United States does unleash hell upon Russia… and invites hell in return… we are proud that it will do so under a truly unified banner.