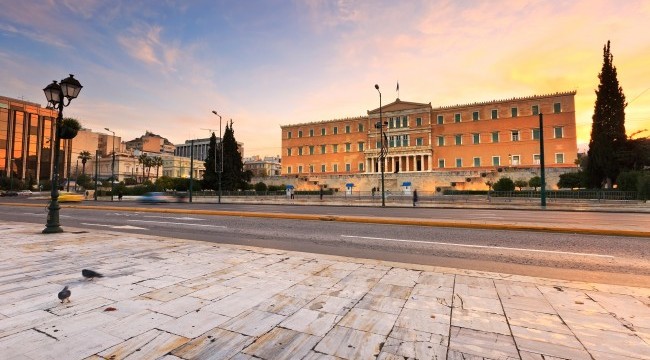 They were remonstrating against the cruelty of life in general and, more specifically, the deal their government made with its creditors.

“Greek workers taken to the cleaners, as Tsipras forced to retreat on promises,” reports the Financial Times.

“Austerity,” the papers call it. But that is just the public narrative. (More on this in Market Insight below…)

Austerity is what Greece would have gotten without $220 billion in bailout funds from its neighbors and two debt restructurings.

Without these, public sector wages… and pensions… would go unpaid. The banking system would collapse. And Greek savings would be obliterated.

In reality, Greece is just cutting back on the extravagant bribes and payoffs to zombies; it’s the price of keeping the whole game going.

Despite the protests, the zombies in Athens were generally quiet and listless last night. They knew the new deal struck in Brussels over the weekend would keep the human flesh coming their way, though not as much as they wanted.

Default on their debt and live within their means?

“We hope Syriza will look after us,” said a janitor. “As long as I live, I hope.”

Meanwhile in Washington, Janet Yellen was pretending to look after janitors, too.

“Looking forward, prospects are favorable for an improvement in the U.S. labor market and the economy more broadly,” she said.

As if she would know!

Yellen went on to suggest that the Fed might move to “normalize” interest rates later this year – if things evolve as expected.

“People need myths,” said a colleague in Paris, Simone Wapler, over lunch yesterday. “They need a public narrative simple enough for them to understand.”

Good vs. evil, black vs. white, red states vs. blue states, evil Germans vs. put-upon Greeks – the narrative must be stripped of all nuance, subtlety, and contradiction.

That is to say it must be stripped of anything resembling real life.

The popular myth about the 2008 global financial crisis was that it was caused by greed and deregulation. Then the authorities stepped in to save the day.

Since then, they have carefully nurtured a “recovery.” When appropriate, Ms. Yellen will turn the economy back over to market forces.

At the Diary we have a different narrative – still evolving, rough around the edges, and necessarily full of paradox and confusion.

What is really going on is a Great Zombie War. The layabouts, manipulators, and grifters are fighting to maintain their hold on the productive economy’s output.

It’s getting harder and harder for them to do so.

First, because there are so many zombies. There’s not enough human flesh to go around.

Second, the zombies have imposed so many regulations and distortions that the economy has become less productive.

Many of the battles you see in the news are really battles between different groups of zombies, each fighting for a larger share of the loot.

Usually, the unproductive parts of a society are limited to the surplus production available to them. And when the surplus disappeared, so did the zombies.

Apparently, when food was short, Eskimo tribes put the older members of the tribe out on the ice, where they would drift away and disappear.

In almost all cultures – as far as we know – laziness and parasitism are discouraged.

In Switzerland, for example, the work ethic used to be so strong that a young man sitting on a park bench in the middle of the day was likely to be approached by an old person waving a cane: “Young man, why aren’t you at work?”

Then along came the post-1971 money system – with its (theoretically at least) unlimited supply of credit.

Suddenly, the sky was the limit for zombiedom…

Firefighters want to retire at 45?

Along with the easy money came a big relaxation in attitudes. Soon, people didn’t seem to mind the zombies around them. And they didn’t mind becoming zombies themselves.

Taking welfare used to be a mark of failure and shame. “Disability” was reserved for people with genuine problems.

Million-dollar paydays were regarded as unseemly, greedy, or vulgar. No more.

Get it while you can! And why not?

The new credit money was splashing out on the street like an open fire hydrant. Just put on your bathing suit and join in the summer fun.

It appeared that society could support as many zombies as it wanted to – with no (current) loss to anyone else.

But wait. What about the debt?

In the mid-1980s, the Republican Party lost its traditional distaste for deficit spending.

Conveniently, it discovered that deficits didn’t matter to voters.

There was plenty of credit. Voters were happy to have bigger Social Security payments. And they would put up with another federal agency to pretend to improve education… or health… or whatever – so long as taxes weren’t raised to pay for it.

The cost would be paid by someone somewhere someday. Who knew? Who cared?

People came to think that a big mortgage was a good thing. House prices were rising. Stocks were going up. If you wanted to get rich, you just had to get “on the escalator.”

And the zombies ran wild from Wall Street to Syntagma Square – siphoning off trillions of dollars of capital from the productive economy.

This is the world that the zombies and their crony allies are so desperate to protect.