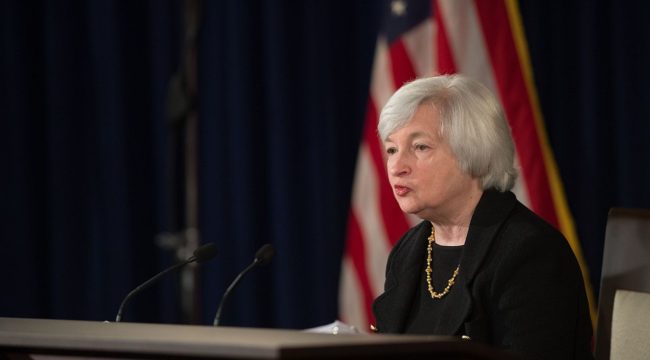 During the last 129 months, the Fed has held 86 meetings. On 83 of those occasions it either cut rates or left them unchanged.

So you can perhaps understand why Wednesday’s completely expected (for the last three weeks!) 25 bips left the day traders nonplussed. The Dow rallied over 100 points that day.

Traders understandably believe that this monetary farce can continue indefinitely, and that our Keynesian school marm’s post-meeting presser was evidence that the Fed is still their friend.

Janet Yellen’s sing-song gibberish was the equivalent of a monetary DEFCON 1, alerting all except the most addicted Kool-Aid drinkers to get out of the casino.

Our monetary politburo has expanded its balance sheet by a lunatic 22X during the last three decades and in the process has systematically falsified financial asset prices and birthed a mutant debt-fueled of simulacrum of prosperity.

But once it begins to withdraw substantial amounts of cash from the canyons of Wall Street as per its newly reaffirmed “normalization” policy, the whole house of cards is destined to collapse.

There will be a stock market implosion soon, and that will in turn generate panic in the C-suites as the value of stock options vanish. Like in the fall of 2008 — except on an even more sweeping and long-lasting scale — corporate America will desperately unload inventories, workers and assets to appease the robo-machines of Wall Street.

But there is nothing left to brake the casino’s fall.

If the money market rate conforms to the Fed’s latest command and settles at 88 basis points, it is still effectively at the zero bound. Our monetary politburo is thus still out of dry powder — except for the nuclear option of QE4, which Yellen herself made quite clear would never happen until after the next recession is already underway.

Yet by then it will be too late — way too late. That’s because the market is priced as if the business cycle has been outlawed and as if the feckless band of Keynesian pretenders who have seized control of financial markets have ushered in the Nirvana of permanent full-employment. World without end.

Needless to say, they haven’t because they haven’t repealed the law of supply and demand. That is, if the Fed plans to keep raising until rates until they reach 3.0% by 2019, it will have to suck massive amounts of cash out of the financial markets.

So doing, it will drive long-term yields substantially higher and thereby obliterate the ultra-low cap rate delusion on which the entire regime of Bubble Finance is based.

In fact, in a blathering response at her presser about the pace by which the Fed intends to shrink its bloated $4.4 trillion balance sheet, Yellen proved she is clueless about the financial firestorm our rogue central bank is about to unleash.

She claimed that the Fed could implement 3-4 money market rate increases a year, while deferring the shrinkage of its balance sheet into the indefinite future.

But that it most assuredly cannot do.

With a staggering overhang of $2.1 trillion of excess reserves in the financial system, even our vaunted monetary politburo cannot command the tides to recede. If it wants the money rate to rise on its appointed path through 2019, it must drain loads of cash from Wall Street.

At the same time, the other event from Wednesday — the freezing in of the Federal debt ceiling at $19.9 trillion — will means that the cash drain will soon intensify.

That’s because the U.S. Treasury has blown a massive wad of cash in order to pay its bills during the last few months, but will soon be back into the market borrowing hand-over-fist. That is, draining cash from the dealer market as it floods Wall Street with new bills, notes and bonds.

At the peak level of its cash hoard on October 24, the U.S. Treasury was sitting on $482 billion of cash.

But as of Wednesday, the Treasury’s cash balance stood at just $77 billion, meaning it burned through $305 billion of cash in just 51 calendar days since the inauguration, and nearly $360 billion since the October 24 peak.

But now that the debt ceiling is again frozen into place, an explosive political crisis is coming soon.

There is simply no pathway to a Congressional majority to raise it until Washington reaches the brink of political crisis and has gone beyond.

The prolonged and turbulent debt ceiling crisis that is coming down the pike is surely not “priced-in.” As I have said, the robo-machines can read headlines, but they can’t read the Washington tea leaves.

The fact is, what is impending is nothing like the 2011 crisis when Obama’s Keynesian advisors scared the wits out of him about a debt rating downgrade, and the GOP backbenches were set-up for a patented betrayal by House Speaker “Lawnchair Johnny” Boehner.

This time there will be no timely compromise.

That’s because the Deep State and its Democratic shills are attempting to re-litigate the election, while the Donald has declared war on them in turn — compounded by his aggressive actions on the immigrant ban, deportation of illegals and the erection of provocative controls and walls at the Mexican border.

The fact is, as a political matter, Hispania is the 51st state, and the channel through which the Democrats hang on to power. They will not support a debt-ceiling increase unless Trump throws in the towel on Obamacare and his anti-immigrant dragnet.

Yet if he folds on those core issues, he will incite a massive revolt in the GOP rank and file, which would make a majority for a debt ceiling increase even more problematic.

Besides, the temporary expedients and accounting gimmicks which the Treasury will now began to roll-out to temporarily defer the day of reckoning actually make no difference where it counts.

Last year during the March through May period, in fact, net debt rose by $96 billion, and there is every reason to believe that this year the shortfall will be even higher.

Accordingly, the current meager cash balance at the Treasury will not even last to Memorial Day.

After that, Uncle Sam will be back on Wall Street borrowing cash hand-over-fist — even as the Fed continues destocking its hoard of government debt through the back door of the repo market.

So what commenced this week and what will remain into the indefinite future is that Washington will be draining massive amounts of cash out of financial markets that have been suckling on the teat of government “stimulus” for most of the past three decades.

Does the school marm running the Wall Street casinos banking window see any of this double whammy coming?

Again Wednesday she professed to see no bubbles anywhere, while floundering incoherently when asked about the timing of the Fed’s belated normalization campaign. A questioner wondered why the Fed is now raising rates just as the U.S. economy shows signs of gathering weakness and the global economy — centered in China and its supply chain — lurches forward in a slow-motion train wreck.

Anyone buying stock based on confidence that the Fed has their back notwithstanding Wednesday’s action surely deserves the pounding just ahead. What Yellen had to say doesn’t even reach the status of babbling; it was flaming incoherence:

Well, look, our policy is not set in stone. It is data-dependent and we’re — we’re not locked into any particular policy path. Our — you know, as you said, the data have not notably strengthened. I — there’s noise always in the data from quarter to quarter. But we haven’t changed our view of the outlook. We think we’re on the same path, not — we haven’t boosted the outlook, projected faster growth. We think we’re moving along the same course we’ve been on, but it is one that involves gradual tightening in the labor market.

So when faced with actual facts about declining real wages, collapsing Q1 GDP estimates, disappointing retail sales and a wild and woolly fiscal process ahead, the Fed chairman defended the third rate hike in 11 years by saying that the “data is noisy.”

What isn’t noisy is the data on the stock market’s bubble of a lifetime.

When it finally pops Yellen and her posse of Keynesian money printers will be incoherent, speechless and finished.

And that pop could come awfully soon.