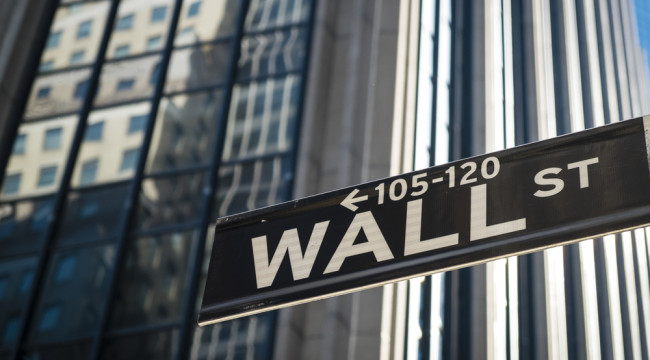 Professional Investors Will Ruin Your Retirement

The first two months of 2016 are in the books, and it’s been a painful period for investors.

At the close of business on Feb. 29, the Dow was down 908 points for the year, losing 5.2% of its value. But even this decline was a vast improvement compared to the 1,974 points (or 11.3% decline) the Dow lost in the first three weeks of January.

With such a volatile and challenging period, investors would have been wise to enlist the help of a professional, right? After all, who better to navigate the minefield of market risk than the institutional investors with all of their ivy league analysts and MIT computer models?

If only it worked that way…

So far this year, only 1% of U.S. mutual funds have managed to squeeze out a profit, according to a Goldman Sachs report.

Just think about that for a second…

With all of the resources Wall Street professionals use to generate return, how could only 1% of these “geniuses” end the first two months in black ink? Is it really that hard for just a few of these funds to use strategies that hold up in a bear market?

Maybe I’m being too hard on them.

After all, the market fell hard in January and the Dow closed essentially flat in February.

Maybe it’s too much to expect that mutual funds would have made money this year. At least investors can take comfort in the fact that losses in these professionally managed mutual funds were less than losses in the overall market — right?

As it turns out, more than seven of every ten large cap mutual fund managers actually lost more than their benchmarks. In other words, 72% of professional investors would have caused your retirement account to do worse than the market, if you invested in their mutual fund.

Would you pay a doctor to make you sicker than you were when you first walked into the office? How about a mechanic that returns your car in worse shape than you gave it to him? And what if this doctor or mechanic charged you a fee to make you worse off than you were before you saw him?

The statistics are clear. The mutual fund industry absolutely stinks when it comes to protecting and growing your retirement account. You would be much better off buying an index fund or ETF than letting these professionals manage your investments. (Except that index funds and ETFs have their own set of major risks, as David Stockman has pointed out here recently).

So why are these professionals so inept at managing your retirement? After all, these guys aren’t dummies. Many of them have master’s degrees from prestigious schools, and have spent their entire lives studying markets.

The answer has everything to do with conformity.

For all of its brains, algorithms, research expertise and inside information, the mutual fund industry is a lot like a herd of lemmings.

As a group, mutual fund managers subscribe to the same newspapers, they read the same research, and they ultimately buy the same stocks.

I’ve seen it happen over and over again.

I should know. I’ve been in the business… sat through the same lectures… attended the same conferences… and heard the same stories over and over again until I couldn’t take it anymore. Sadly, the mutual fund industry is completely devoid of creativity or original thought. And because these lemmings all own the same investments, they typically all fail at the same time.

Take a look at the Bloomberg graph below: 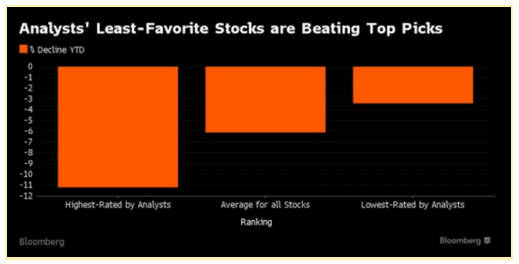 This chart shows that the stocks Wall Street analysts are most keen on — the ones that mutual fund managers have loaded the boat with — are posting the biggest losses this year.

These are all stocks you’re probably aware of (but hopefully not invested in). I’m talking about the FANG — Facebook, Amazon, Netflix and Google — stocks, or other high-profile momentum stocks.

Analysts love these stocks because they have exciting stories behind them, and they’re companies that are familiar to most investors. It’s easy to tell someone why you’re excited about Netflix, because most Americans actually use Netflix and like the service.

But that doesn’t mean that Netflix is a good investment… Especially if Netflix is trading at an absurd price compared to the amount of profit the company generates.

Unfortunately for most retirees, the mutual fund industry owns too many of the wrong stocks. And like a herd of lemmings, these investors are stampeding off a cliff. And they could send the value of your retirement account into a free-fall, if you’re invested in the funds they manage.

So what are investors to do? Can you really hope to beat Wall Street experts at their own game? Is it possible to grow your retirement account without risking the same declines that are currently plaguing the mutual fund industry?

The answer is a resounding “yes!”

You can definitely grow your retirement account, while collecting reliable investment income. And you can do this while soundly beating the mutual fund lemmings.

Instead of buying the hot stocks that everyone else is talking about, you’re going to need a more disciplined approach. You’re going to need to own stocks of companies that have reliable businesses, and that pay dependable dividends quarter after quarter. (These dividends are crucial in helping you build wealth over time.)

This type of investing is a lot less exciting than buying “the next Tesla” and watching your account soar (and subsequently plummet). But it’s a much more reliable way to grow your retirement account.

How about some proof?

Since 1926, investor total returns have increased by 50%, just because of dividend income (Dividends account for one-third of return — or 50% more than return without dividends). This according to a Standard & Poor’s research report. Just think of how much wealth you could accumulate with 50% more growth than the Dow or S&P 500 levels.

Buying dividend stocks of great companies (instead of the latest vogue technology stocks) is one of the easiest ways to put yourself ahead of Wall Street’s “elite” mutual fund managers.

I’m talking about historically stable companies like Procter & Gamble (PG) or General Electric (GE) — two companies with a longstanding history of profits and paying dividends to their shareholders.

Don’t let another day go by while you hold mutual funds in your retirement account. Remember, only 1% of these funds have actually made investors money this year, and 72% of them actually did worse than the market.

If there’s one thing you do today for the sake of your family’s financial well-being, please sell your mutual funds right away. And buy quality companies proven to pay high, consistent dividends over time.

Here’s to your growing income!