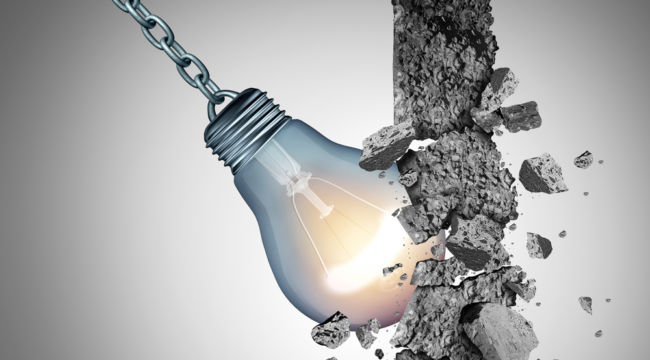 I introduced President Reagan to microchip technology some 35 years ago. I handed him a Micron 64K DRAM (Dynamic Random Access Memory).

Why bring this up now?

Because I’m currently in possession of another game-changing microchip. And my team thinks I should show it to President Trump. This chip was made by Bitmain in China. It’s a little over half the size of the DRAM I showed Reagan.

And it embodies the application-specific integrated circuit (ASIC) design that enables the “mining” of cryptocurrencies such as Bitcoin and Ethereum’s ether. If you’re not aware of mining, it’s part of the core of blockchain technology. It’s the process where new transactions get verified and added to a block in the chain.

Think that should be of interest to President Trump?

I think so, too. The Bitmain chip was designed by young Chinese engineers who, beginning in 2012, saw that cryptocurrencies would become a huge market.

Performing trillions of complex mathematical operations — called “hashes” — per second, the Bitmain chip is thousands of times faster than the general purpose integrated circuits that run your laptop.

In fact, new application-specific Bitmain chips are faster even than the world’s leading general purpose supercomputers. But it gets better…

The Bitmain chip I have in my hand is being replaced by a new one that performs thousands of times more hashes — and is drastically more energy efficient. Made with industry-leading seven-nanometer geometries at Taiwan Semiconductor Manufacturing Corporation (TSMC), the new Bitmain device is many millions of times more capacious than the microchip I handed to President Reagan.

Now, in order to grasp the investment potential of technologies, you need to understand their interdependencies in a “system of the world”— a set of ideas that inform a society’s technology, institutions and culture.

For instance, I told Reagan that microchip technology would enable a distribution of computing power around the globe that would empower individuals and undermine government bureaucracies.

Microchips would foster a “new system of the world.”

Investors and entrepreneurs should always be conscious of the prevailing “system of the world.”

You might believe the world is a crowded and precarious place with its climate seriously threatened by carbon dioxide in the atmosphere.

If so, you would seek different technologies from someone who believes, as I do, that the human population can rise several fold on an abundant planet with ever greater productivity and wealth. That continued advancement will allow us to thrive without constantly looking in the rearview mirror.

You see, technological innovations are not best understood as separate inventions. They converge in new systems.

Like an industrial revolution based on fossil fuels or a decentralized internet, a constellation of giant social networks or a global economy of top down bureaucracies, a planet fueled by solar and wind or a thriving global economy of creative individuals and entrepreneurs.

All technology is interdependent.

And to convey this idea of interdependency, I like the analogy of the “car in the jungle.”

If you were a jungle dweller and encountered a car in a clearing, you might regard it as an impressive technology.

Heat, lights, air conditioning, shelter, radio communications, tires to protect it from insects and moisture — even a loud horn to frighten away fierce animals.

You might gaze at the car in wonder and desire, never imagining that the uses of automobiles are only fulfilled in conjunction with roads.

Until the opening up of the global internet in the 1990s, you lived in a world of huge centralized mainframe computers. But you might never have imagined that the power of computing is only realized in conjunction with networks.

Most users saw computers as giant calculating machines that complemented a system of the world based on giant multinational corporations epitomized by IBM, Xerox, Exxon, and General Electric.

Xerox’s corporate “system of the world” was so paralyzing that it prevented it from exploiting the invention in its Palo Alto laboratory, Xerox PARC, of all the key components of the personal computer and networking revolutions.

Expressing the prevalent images of professional work in the mid 20th century was “The Man in the Grey Flannel Suit,” regarded as a compliant corporate citizen embodying a homogeneous corporate culture that was copied (as if directly by Xerox) across the Fortune 500.

As an investor, you should seek unities among supporting technologies. That is, innovations that complement other innovations and thus create spirals of advance and opportunity in a new system of the world.

So what are today’s most promising information technologies? I’m currently looking closely at…

The list could be expanded indefinitely. Also emerging and competing for resources are an array of new alternative energy technologies, from new forms of solar and windmills to geothermal and fusion.

To decide where to invest, you have to understand the systems of the world. So what is the system of the world favored by the ASIC microchip from Bitmain?

As I mentioned above, it does promise to make cryptocurrency mining more efficient. And in the view of the world prevailing in most U.S. universities and even at leading tech companies such as Google, bitcoin mining is vastly wasteful.

It consumes amounts of energy comparable to small European nations.  It emits dangerous levels of CO2. It is part of an industrial economy that is doomed by climate change.

But to me, the most wasteful process in the world economy is the world’s leading industry: $5.1 trillion a day of currency trading. That total is some 25 times world GDP and over 70 times world trade in goods and services.

Yet all this shuffling and floating of currencies does not even set monetary values that obviate trade wars and monetary conflicts, or that enable simple transfers of value across borders without hedging.

All floating currencies accomplish is to allow central banks and politicians to steal from the future to finance present consumption.

So I may be focusing on a different system of the world, but because of its ability to expand the crypto movement, the ASIC chip might hold the key either way.

In other words, the ASIC chip could serve two conflicting systems of the world. And I will be exploring the implications of these competing systems in future issues of TheDaily Reckoning.