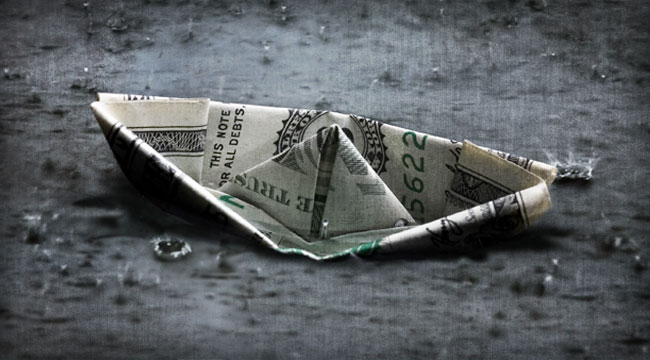 Preserve Your Wealth While the Economy Shrinks

Let’s start with bad news about the macro-side of the U.S. economy — and it’s very bad, indeed. You may have seen last month’s report out of the U.S. Commerce Department. U.S. gross domestic product (or GDP, a measure of the economy) delivered its worst performance in five years during the first quarter of 2014.

Revised government figures indicated that GDP shrank at an annual rate of 2.9% in the first three months of this year. The decline was worse than the previous 1% growth estimate. It was far below expectations of many name-brand economists in major media outlets, who get paid to find silver linings and not scare the public.

Actually, negative GDP growth of -2.9% was likely an understatement. That is, it’s worse because government statistic-crunchers “deflated” nominal GDP with low inflation numbers that exclude food and energy. As anyone knows, though, based on visiting a supermarket or gas station, price levels for these items alone are climbing rapidly. Thus, true inflation is higher than officially reported; and the so-called -2.9% contraction in GDP is also a low-ball government number.

Despite negative news, most stock market indexes still trend “up.” Yes, rising markets make strong-looking balance sheet growth; but don’t be fooled. In terms of national income accounts (or “cash flow,” so to speak), fundamentals are lacking. For example, in the first quarter, foreign trade was a drag on the economy; exports fell by 8.9%. Ugh!

Meanwhile, U.S. household incomes are not growing, except in top “one percent”-type of occupations.

It’s the long-term effect of in de-industrializing the landscape over the past 25 years. That is, any more, entire supply chains are outsourced, such that a “Made in America” label often just means that there’s a factory somewhere assembling shiny things made from imported parts. “Made in U.S.A.” might look good on paper, but we certainly no longer dwell in the old fashioned “Arsenal of Democracy.”

Overall, for a variety of reasons, U.S. job creation is behind every trend line you can find. Hiring slowed in the first three months of 2014, in no small part due to Obamacare, per several reputable polls and surveys. As Forrest Gump noted, “That’s all I’ll say about that.”

Job-list casualties include entry-level positions, reflected by shockingly high youth unemployment (20% among youth aged 16 to 24, per a recent U.S. Senate report) — and frighteningly high among minorities (nearly 55%, nationally, per the same source). Indeed, we’re seeing a “lost generation” take shape out there; unemployed, indebted and lacking job skills. These poor souls will likely never make up for missed opportunities.

Meanwhile, nationwide, business startups are lagging, according to the Chamber of Commerce; and productivity growth is more flat than anything else, per the Conference Board. Sad to say — but the Federal Reserve is saying it — the fastest growth in credit is with student loans, of all things, which reflect the “too-big-to-fail” nature of subsidized academe.

Absent income and credit growth, the U.S. economy is languishing. One bright spot is the energy sector, particularly the oil and gas patches of many states across America. There, jobs are plentiful and capital spending is firm. That, plus we have all that nice oil and gas coming out of the ground.

Of course, government regulation is rising in the energy sector, particularly on the environmental side of the ledger. I can’t resist noting that it’s as if all geese that lay golden eggs are apparently enemies of the state.

I also can’t resist wondering if this is what comes from $8 trillion in deficit spending over the past five years, post 2008-crash; and five years of Fed “quantitative easing” (QE); and massive job growth across the federal bureaucracy. As Peggy Lee once asked, in her sultry song of the same name, “Is That All There Is?”

What can you do? How should you focus your portfolio? Can you invest around or through this mess?

Long suffering readers of the DR will know that, generally, my investment focus is built on two key points.

One is to own hard assets like gold, silver, platinum group metals (PGM), copper and other mine plays.

The other focus point is energy, with an emphasis on international majors and North American plays, as well as critical technology in the oil service side. Real stuff, in other words.

First, let’s discuss precious metals. If you don’t own physical gold and silver, get some. This week, gold is selling just over $1,300 per ounce; silver is in the $21 range per ounce.

Are these the “right” prices for gold and silver? If you buy, will you pay too much? Hey, there’s a down-side risk to everything. So if you buy, don’t spend all your cash in one place on one big splurge.

That is, play it out over time, because gold and silver prices could decline, to be sure. There’s plenty of market manipulation for precious metals, if for no other reason than politicians and central bankers everywhere hate the idea of things they can’t control. Then again, look at what a great job they’ve done with things they’ve tried to control, like the declining U.S. economy and the boiling Middle East.

Still, for precious metals to decline significantly, we’ll need the dollar to strengthen — which might happen in that “safe haven” sort of way, as the Middle East falls off a cliff. Then again, with the U.S. economy contracting, the likelihood is we’ll have more deficit spending on more programs — from welfare to bureaucrats to more weapons. In essence, that means more inflation over time, even if government statistics don’t measure it properly. Thus, over the long haul, precious metals are a way to preserve wealth. In five or ten years, you won’t be sorry.

In the PGM department, one great way to buy in is via the Sprott Platinum & Palladium Trust (SPPP: NYSE), where each share is backed by real metal in a bonded warehouse in Canada or Great Britain. Tread carefully with this one, just now, though. The South African mine strikes are settling, so my advice is to let the dust settle before making a big commitment.

When it comes to copper, my view is to buy into Freeport McMoRan Copper & Gold (FCX: NYSE). It’s a buy right now, during a market lull for mining guys; that is, share prices for copper miners are down. Buy low, sell high, eventually. Meanwhile, collect a dividend yield of 3.6%.

P.S.: In order to make the most of your hard-earned dollars, it’s imperative to be diversified. And while precious metals are often one good option, there are several great opportunities for you to safeguard and grow your wealth no matter what fly-by-night currency plagues your investments. In order to get the best of them, sign up for the FREE Daily Reckoning email edition, before you do anything else…