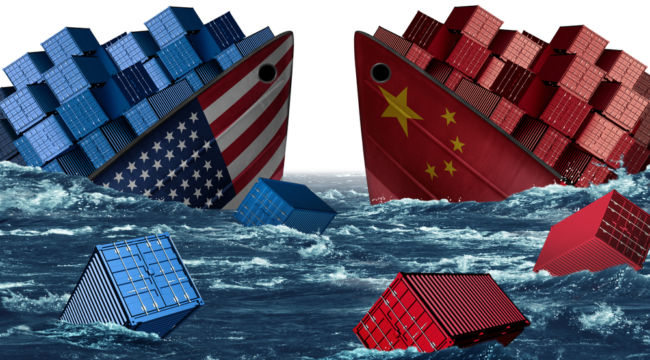 Prepare for the Perfect Storm

What are the three elements of the perfect political and market storm I see coming together this fall?

The first is the accelerating efforts by the Democratic House of Representatives to impeach President Trump. The second is the socialist-progressive tilt in the 2020 presidential election field. The third is the fallout from the Mueller report and the Russia collusion hoax — what I and others called “Spygate.”

You thought the Russia collusion story was over? Don’t count on it.

These components are independent of each other but are at high risk of convergence in the coming months.  Let’s look more closely at the individual elements of impeachment, electoral chaos and Spygate that comprise this new storm with no name.

The first storm is impeachment. Impeachment of a president by the House of Representatives is just the first step in removing a president from office. The second step is a trial in the Senate requiring a two-thirds majority (67 votes) to remove the president. Two presidents have been impeached, but neither was removed. Nixon resigned before he could be impeached.

If the House impeaches Trump, the outcome will be the same. The Senate is firmly under Republican control (53 votes) and there’s no way Democrats can get 20 Republicans to defect to get the needed 67 votes needed. So House impeachment proceedings are just for show.

But it can be a very damaging show and create huge uncertainty for markets. There are powerful progressive forces in Congress and among top Democratic donors who are fanatical about impeaching Trump and will not be satisfied with anything less. A large percentage of Democratic voters favor impeachment, including almost 100% of the activist progressive base.

Speaker of the House Nancy Pelosi had previously poured cold water on impeachment talk. She had felt it was a distraction from Democratic efforts to enact their legislative agenda. But the recent whistleblower allegations that Trump pressured Ukraine to investigate the Biden family’s ties to a corrupt energy company in exchange for arms sales forced her hand.

Now, it’s important to understand that the House has not impeached Trump. No formal charges have been filed. It’s only begun an impeachment inquiry to investigate the allegations. Having said that, you can expect that the inquiry will lead to formal charges for political reasons if nothing else. Democrats don’t want to come back and say “never mind, Trump did nothing that warrants impeachment.”

The final outcome is irrelevant; what matters is the process itself. Democrats hope to make Trump appear unfit to continue as president heading into next year’s election. But their gambit could backfire.

A large percentage of voters do not favor impeachment and may look at it as simply a political tactic by Democrats. Undecided voters might therefore swing towards Trump next November. And needless to say, impeachment will only rally Trump’s base.

But as far as markets are concerned, impeachment will create a lot of uncertainty.

The second storm is the 2020 election itself. Trump is on track to win reelection in 2020. My models estimate his chance of victory is 69% today and it will likely get higher as Election Day approaches. The only occurrence that will derail Trump is a recession.

The odds of a recession before the 2020 election are below 40% in my view. Meanwhile, Trump will keep up the pressure on the Fed to lower interest rates.

This may sound like a rosy scenario for the economy. But it’s not so rosy for the Democrats. Any piece of good economic news will cause Democrats to dial up their political hit jobs on Trump. Each one will try to outdo the last.

There are still several candidates for the 2020 Democratic presidential nomination. Joe Biden and Bernie Sanders were out in front until fairly recently. Biden was considered the most moderate of the candidates, but he’s also a victim of the whole Ukraine story, as it could well reveal his own wrongdoing when he was vice president. That’s a major blow to his chances, and I don’t expect Biden to survive the process.

And Bernie Sanders’ latest heart attack certainly doesn’t help his chances. At 78, his health is definitely a concern.

Elizabeth Warren has now emerged as the most likely Democratic nomination. But her harsh anti-Wall Street rhetoric will likely cost her support from the big Wall Street donor money. And she has been favorably inclined towards reparations for slavery, free health care, free child care, free tuition, much higher taxes and more regulation.

So you could have a shock effect where all of a sudden it looks like the Democratic nominee is going to be a real socialist. And that would rattle markets.

That’s why it shouldn’t shock you if Hillary Clinton tries to swoop in and take the nomination. I’m not making a specific prediction, but don’t rule it out.

But this uncertainty, coupled with bitter partisanship aimed at Trump will be a source of market volatility until Election Day in 2020 and perhaps beyond.

But the third storm is the most dangerous and unpredictable storm of all: Spygate. It involves accountability for those involved in an attempted coup d’état aimed at President Trump.

But Trump will look to move from defense to offense and redirect the focus towards the swamp.

These are just a few of the many questions that will be investigated and answered in the coming months.

These criminal referrals will be taken seriously by Attorney General William Barr along with other criminal referrals coming from Congress. Barr will take a hard look at possible criminal acts by John Brennan (CIA director), James Comey (FBI director) and James Clapper (director of national intelligence) among many others.

At the same time Lindsey Graham, Republican senator from South Carolina, could hold hearings in the Senate Judiciary Committee about the origins of spying on the Trump campaign and lies to the FISA court. These may be the most important hearings of their kind since Watergate.

Aside from impeachment, Trump will be running for reelection against this backdrop of revelations of wrongdoing by his political opponents in the last election. Actual indictments and arrests of former FBI or CIA officials will cause immense political turmoil.

Such charges may be fully justified (and needed to restore credibility). They will certainly energize the Trump base.

But they are just as likely to infuriate the Democratic base. Cries of “revenge” and “witch hunt” will be coming from the Democrats this time instead of Republicans. Markets will be caught in the crossfire.

How do these three storms — impeachment, the 2020 election and Spygate — converge to create the perfect storm?

Within the next couple of months, the impeachment process should be well underway in the form of targeted House hearings. The 2020 Democratic debates will be red-hot. Trump’s counterattacks on the FBI and CIA should be reaching a fever pitch based on real revelations and actual indictments.

The 2020 candidates will have to take a stand (even though they may prefer to discuss policy issues). There will be nowhere to hide. The bitterness, rancor and leaking will be out of control.

Any one of these storms would create enough uncertainty for investors to sell stocks, raise cash and move to the sidelines. The combination of all three will make them run for the hills. That’s my warning to investors.

The next several months will present unprecedented challenges for investors. Markets will have to wrestle with fights over impeachment, election attacks and Spygate. Trump will be trying to improve his odds by pressuring the Fed to cut rates and begin quantitative easing again. Democrats will be trying to derail Trump with impeachment.

Some of it could include arrests of former senior government officials and revelations of an attempted coup aimed at the president.

A perfect storm with no name is coming. The only safe harbors will be cash, gold and other hard assets, as well as Treasury notes. And make sure you have a life preserver handy.