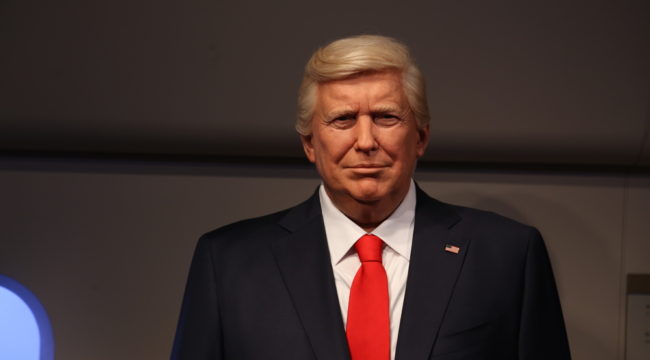 A Potpourri of Platitudes, Pandering and Profligacy

[Ed. Note: To see exactly what this former Reagan insider has to say about Trump and what fiscal policy must be met in government, David Stockman is sending out a copy of his book Trumped! A Nation on the Brink of Ruin… And How to Bring It Back to any American willing to listen – before it is too late. To learn how to get your free copy CLICK HERE.]

I could just call the Donald’s maiden Congressional address a potpourri of platitudes and pandering — and then move along.

But I can’t get over the profligacy part. Trump promised more Big Government practically everywhere — the Pentagon, infrastructure, border control, education, veterans, crime, child care, medical tax credits — with nary a word on how to pay for it.

Actually, our wanna-be swamp drainer did not even acknowledge that the fetid waters of the Imperial City were lapping up to his waist as he spoke. That is, there was not a single mention of runaway spending or even a vague directional nod to programs that would have to be cut back or eliminated.

For the record, in his inaugural address to Congress on February 18, 1981, Ronald Reagan mentioned dozens of them under far less desperate circumstances than today. And he did so because he knew that unless the public is told about the tough choices that need to be made, the Congress will never be mobilized to vote them through:

… And I’m asking that you join me in reducing direct Federal spending by $41.4 billion in fiscal year 1982, and this goes along with another $7.7 billion in user fees and off-budget savings for a total of $49.1 billion…

All in all, nearly $216 billion worth of programs providing help for tens of millions of Americans will be fully funded. But government will not continue to subsidize individuals or particular business interests where real need cannot be demonstrated. Therefore, I’m proposing a savings of $85 million in the Federal subsidies now going to the arts and humanities…

There are a number of subsidies to business and industry that I believe are unnecessary. One such subsidy is the Department of Energy’s synthetic fuels program (where) we can save at least $3.2 billion by leaving to private industry the building of plants to make liquid or gas fuels from coal.

We’re asking that another major industry — business subsidy I should say, the Export-Import Bank loan authority, be reduced by one-third in 1982. We’re doing this because the primary beneficiaries of taxpayer funds in this case are the exporting companies themselves — most of them profitable corporations…

By terminating the Economic Development Administration, we can save hundreds of millions of dollars in 1982 and billions more over the next few years. There’s a lack of consistent and convincing evidence that EDA and its Regional Commissions have been effective in creating new jobs. They have been effective in creating an array of planners, grantsmen, and professional middlemen…

We will tighten welfare and give more attention to outside sources of income when determining the amount of welfare that an individual is allowed. This, plus strong and effective work requirements, will save $520 million in the next year…

Ineffective targeting, wasteful administrative overhead—all can be eliminated by shifting the resources and decision-making authority to local and State government. This will also consolidate programs which are scattered throughout the Federal bureaucracy, bringing government closer to the people and saving $23.9 billion over the next 5 years…

The space program has been and is important to America, (but) a reordering of priorities to focus on the most important and cost-effective NASA programs can result in a savings of a quarter of a billion dollars. Now, coming down from space to the mailbox, the Postal Service has been consistently unable to live within its operating budget. We propose reducing those subsidies by $632 million in 1982 to press the Postal Service into becoming more effective, and in subsequent years the savings will continue to add up.

Even then, what the Gipper was terrified by was a ballooning national debt that was small beans compared to the present:

Can we, who man the ship of state, deny it is somewhat out of control? Our national debt is approaching $1 trillion.

By contrast, within weeks the Donald will become ensnared in a giant $20 trillion debt trap. The latter — plus the $10 trillion more built-into current law over the next decade — will knock the stuffings out of his promises to make America Great again by causing it to go broke even faster than before.

It will also monkey-hammer the hideously inflated stock market bubble that is now going full-frontal on Trump’s undeliverable promises of “big, big” corporate cuts and a “massive tax reduction for the middle class.”

Surely the Donald will soon rue the day that he boasted about the $3 trillion stock market gain during the first 40 days of his watch.

The survival of capitalist prosperity and constitutional liberty in America depend upon an end to the current mutant regime of Bubble Finance that has buried the nation in debt and monetary fraud.

By delivering 65 minutes of airballs and content free bloviation, in fact, the Donald actually helped usher in that needed day of reckoning.

That’s because, unlike the Gipper, he has not given an iota of substance about how he intends to tame the nation’s out of control fiscal machinery. In fact, what he has said to date consists essentially of self-contradictions, budgetary gibberish and extreme naiveté.

For example, he took another bow for saving $600 million on the new F35 fighter plane, when in fact he got conned by a standard beltway military contractor scam. That is, this plane is a $400 billion monstrosity that will provide thousands of stealth fighters that we don’t need because the only place they can be used — the Middle East — has already been reduced to rubble.

By contrast, Russia and China are already fully deterred by Washington’s massive nuclear arsenal. So these $100 million per copy aircraft are useless on those fronts. The idea that you could fight a conventional war with China without destroying the global economy or with Russia without it going nuclear real fast, is just the kind of strangeglovian fantasy that keeps the military industrial complex alive.

Even then, the F-35 is essentially still in the launch phase of a multi-decade procurement. This front-end phase is called LRIP (Low-Rate Initial Production) because many performance specifications and testing standards have yet to be meet.

So compared to the ultimate total of 2,500 of these planes the Pentagon intends to purchase, the Donald is talking about 90 test planes under LRIP-10, which are coming in 6.7% per unit cheaper than the 45 planes purchased under LRIP-9, which in turn, came in 3.5% cheaper on a unit basis than the handful of prototypes procured under LRIP-8.

In a word, nobody saved anything! This is just the standard economics of the ramp-up curve for massive weapons programs like the F35.

But in selling the Donald a batch of phony savings, the swamp critters from Lockheed and the Pentagon reinforced Trump’s wrong-headed belief that he can negotiate his way to fiscal  balance by making better deals with government vendors and agencies.

In truth, Trump’s “great negotiator” theory is far more groundless than the Gipper’s stubborn conviction that the budget could be shrunk by eliminating fraud, waste and abuse.

To the contrary, there is virtually none in the $1 trillion social security program and what passes for it in the $1.1 trillion outlays for Medicare and Medicaid is the inherent disputes over pricing of services and necessity for services that is inherent when the government becomes the payor for billions of discrete medical bills submitted in behalf of nearly 100 million separate beneficiaries.

Uncle Sam is now hemorrhaging cash at a rate of $5 billion per day, yet Trump and his team remain obstinately unaware that they are heading for a hard stop debt ceiling crisis after March 15.

But beginning on that date — slowly at first and with accelerating intensity — the Imperial City will suddenly become transfixed by the fact that the Treasury is running out of cash and there is no conceivable path to a Congressional majority to raise the nation’s $20 trillion debt ceiling on a timely basis.