There’s a great amount of Russia hysteria in the air. You see it in the media, in political discourse and in popular conversation.

Much of this hysteria can be traced either to the unorthodox Trump campaign or its hyperbolic critics. It’s too bad, because Russia is an important country that deserves serious consideration, not the superficial caricature now on display.

Investors have a rare opportunity to make huge profits in Russian markets right now. They key to unlocking this profit opportunity is to ignore the political bombast and focus on the fundamentals. 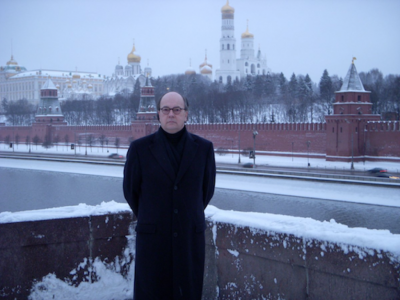 Your correspondent during a visit to Moscow. The red walls of the Kremlin appear behind me across the Moskva River. Inside the Kremlin is a mixture of traditional Orthodox churches with gilded onion-style domes, 18th- and 19th-century-style European palaces and unattractive modern government buildings.

Before diving in on the more sensitive aspects of U.S.-Russian relations, a reality check is in order.

Here are the facts: Russia is the largest country in the world by size, almost as large as the next two largest, Canada and the U.S., combined. Russia is one of two nuclear weapons superpowers, along with the U.S.

In short, Russia is too big to be ignored. Whatever politicians and the media may say, Russia is not going away. Russia will inevitably play an important role in geopolitics under any balance-of-power scenario.

The drumbeat of adverse publicity began last summer during the presidential campaign, when a stream of hacked Democratic Party emails was released by WikiLeaks. That computer hacking was traced to Russia by the U.S. Intelligence Community.

In turn, the Democrats blamed the leaks for their loss in the presidential election, on Nov. 8. That’s probably a stretch, but it made a strong talking point for the liberal-progressive wing of the Democratic Party and was picked up by sympathizers in the press.

Meanwhile, Trump had made some positive comments about Russian President Vladimir Putin during the campaign, and indicated he might lift some economic sanctions on Russia if elected. A number of Trump campaign officials, presidential appointees and other associates had business ties to Russia, including Paul Manafort, a Trump campaign manager, and Rex Tillerson, former CEO of Exxon Mobil and the new secretary of state.

Almost out of nowhere, Trump cordiality with Russia and Democratic anger at Russian hacking merged into an out-of-control conspiracy theory that somehow Trump associates had conspired with Russian intelligence to throw the election to Trump. The alleged conspiracy and the media frenzy around it reached a fever pitch.

One Trump official, Lt. Gen. Michael Flynn, had to resign as national security adviser because of conversations with the Russian ambassador to the U.S. Another Trump official, Attorney General Jeff Sessions, had to recuse himself from Russia-related investigations by the FBI and Justice Department.

Leaks about the “Russia connection” seemed to be coming from everywhere. Various congressional investigations are gearing up. This story won’t go away soon.

Before drowning in the fever swamps of scandal, it’s important to clear the air so investors can focus on fundamentals.

Russian intelligence certainly did try to hack every U.S. government or political server they could find. That’s their job. The U.S. does the same thing to Russia. That’s our job (although the U.S. is probably better at it than the Russians).

Of course, Russia tried to influence the U.S. election. They’ve been interfering in elections around the world since the Comintern (short for “Communist International”) was established by Lenin in 1919.

The U.S. is just as active in influencing foreign elections and foreign governments. The U.S. backed the assassination of Ngô Đình Diệm, president of South Vietnam, in November 1963. The entire Japanese Diet was on a CIA payroll from 1950–70. The U.S. was influential in fomenting civil unrest in Ukraine in 2014. This led to the Russian reaction in Crimea and eastern Ukraine.

I’m not stating a moral equivalence. I’m just stating the facts. The idea that Russia hacked our servers and tried to influence our election is so mundane as to be boring. The real story is why the Obama administration didn’t do anything about it. Why not publicize it, take countermeasures and impose sanctions?

The answer is that Obama thought Hillary Clinton would win the election and the Russian actions wouldn’t matter. Oops. Trump won. And now perfectly ordinary Russian actions are at the center of a media and political storm.

Why does this matter to investors?

It matters because Russia is a great investment opportunity at the moment, but the political noise is making that difficult to see.

From 2014–16, the Russian economy was in a death spiral. This was due to the double-whammy of crashing oil prices and punitive U.S. economic sanctions after the Russian annexation of Crimea and intervention in eastern Ukraine.

Just when it seemed Russia might cry uncle and concede to U.S. demands, everything turned around. The price of oil recovered from $24 to $55 per barrel. The ruble rallied back to 58-to-1. Foreign exchange reserves stabilized and have recovered to almost $400 billion.

This turnaround was due both to the resilience of the Russian people (something greatly underestimated by the Obama administration) and the expert management of the Russian reserve position by Elvira Nabiullina, the head of the Central Bank of Russia. Nabiullina is one of the few central bankers in the world who actually understand central banking.

Best of all, President Trump indicated that he might relieve some of the economic sanctions on Russia when they are due to expire in June, just a few months from now. It was partly on this basis that the Russian stock market, measured by the MICEX index, took off like a rocket after the U.S. election on Nov. 8, 2016.

The MICEX reversed beginning in late December 2016 just as the Trump-Russia collusion story started to take off. As the story grew in intensity, the MICEX plunged almost back to the levels it held just before the U.S. election.

The question for investors is this: Will MICEX weakness continue because of the noise around the Russian hacks and the alleged Trump involvement?

Or will the MICEX rally resume because there is no substance to the Trump-related allegations and because the Russian fundamentals are positive regardless of the political noise?

The most important point is that the allegations involving Trump and Russia are mostly noise drummed up by the “Resistance” to Trump and their friends in the media.

As noted above, Russian interference has been going on since 1919 and Trump associate ties to Russia are not unusual. I’ve been to Russia myself and done some business there. It’s all in day’s work, nothing nefarious. This too shall pass.

The other critical point is that sanctions relief is coming. Trump cannot openly discuss this right now because of the Russian-related allegations. But by later this spring, the White House will lay the groundwork for some relief.

Behind all of these developments is the looming confrontation between the U.S. and China.

If the U.S. will be confronting China, it cannot confront Russia at the same time. That’s the same “two-front war” that defeated Napoleon and Hitler.

The U.S. needs Russia as a friend or at least neutral before it takes on China in East Asia.