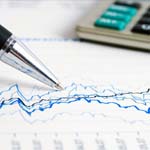 The U.S. economy, contrary to popular perception, is very fragile. If you disagree, consider how the economy would change if the U.S. federal budget were put on a sustainable path, or if the Federal Reserve stopped its risky, activist policies.

Fragility, more than any other factor, explains why the stock market rally is likely to exhaust itself fairly soon. Recent earnings reports from leading U.S. companies offer little hope that earnings are about to soar. In fact, many companies are warning about a tough 2013. The stock market owes most of its “strength” to the Fed, not to the economy.

Since 2008, stocks have been benefitting from the Fed’s “EZ money” policy and from the delightful “Phase 1” of Murray Rothbard’s “three phases of inflation.” In this phase, the money supply grows at a faster pace than the overall price level. Despite surging supplies of base money, savers hoard cash, instead of spending it. So inflation does not show up in the prices of goods and services.

But Phase 1 is almost over…and Phase 2 is about to begin.

“Unfortunately, the relatively small price rise [i.e., low inflation] often acts as heady wine to government,” Rothbard observes. “Suddenly, the government officials see a new Santa Claus, a cornucopia, a magic elixir. They can increase the money supply to a fare-thee-well, finance their deficits and subsidize favored political groups with cheap credit, and prices will rise only by a little bit!”

Does this observation remind you of the current environment — in which the Fed is master of the universe, can fine-tune every asset market and is in the process of making us all “wealthier?” Unfortunately, like any addiction that gives positive feedback initially, the Fed will overdo it. That takes us to Phase 2…

In this phase, the public starts to expect rising prices. “The public’s deflationary expectations have been superseded by inflationary ones,” Rothbard writes:

At this point, when the Fed gets concerned about destroying confidence in the dollar, it must choose between 1) deflating the system with policies that painfully rid the system of its excesses — i.e., risk causing a severe recession — or 2) continuing a loose policy and risking Phase 3…

If the Fed chooses the disastrous path of loose policy in Phase 3, we’ll see folks trying to get rid of cash as fast as they receive it. Rothbard describes the phenomenon:

“A frantic rush ensues to get rid of money at all costs and to buy anything else. In [Weimar Germany circa 1923], this was called a ‘flight into real values.’ The demand for money falls precipitously almost to zero, and prices skyrocket upward virtually to infinity.”

Hyperinflation is the ultimate endgame of an addiction to easy money policies. Fed governors may say they can reverse policy anytime they wish. But that’s just theory. In reality, reversing course will be politically impossible here in the U.S. No elected official or Federal Reserve chairman will advocate the true austerity that would be necessary to halt runaway inflation. So easy money is here to stay — at least until we are well into Phase 2.

“No one knows the exact timing,” says Fred Hickey, editor of The High-Tech Strategist, “but at some point soon, we’ll be on to Phase 2 of inflation (the recognition stage) and, hopefully, not to Phase 3 [hyperinflation]. As Phase 2 proceeds, the long, secular bull market in gold should reach its zenith (a blowoff top frenzy).”

If Hickey (and Rothbard) is correct, the frustrated holders of gold and gold mining stocks probably won’t have to endure much more pain. With each passing day that the Fed prints money to help fund a bankrupt government, gold’s competitive position against the dollar improves.

Meanwhile, the system’s addiction to easy money will increasingly hurt the real economy. Already, a kind of stealth inflation is corroding household wealth. More and more families are having a hard time keeping up with rising payroll taxes and health care, food, utility and gasoline bills. Whatever “wealth effect” the Fed is promoting in the stock market is more than offset by a higher cost of living away from Wall Street.

In the March 6 issue of The Gloom Boom & Doom Report, Marc Faber argues that the Fed’s wealth effect theme looks overdone. Faber is a standard-bearer for the Austrian School of economics. Along with Fred Hickey, Faber recognizes bubbles, warned in advance about the 2008 crash and turned bullish near the 2009 lows. Both are now warning of froth in the stock market.

Faber offers a quote from philosopher Bertrand Russell to explain how the Wall Street community latched onto the idea that money printing can make us all wealthy:

“It should be clear that people in the financial sector will accept bailouts and money printing ‘even on the slightest evidence’ that these policies work, because they ‘afford a reason for acting’ in accordance with their ‘instincts,’ which will always support any economic policies that boost asset values, performance fees and their personal wealth. How these monetary policies will eventually play out remains to be seen. The optimists will contend that the world is healing. I maintain that these interventions will cause even more problems down the road, including a financial and economic systemic crisis…”

Faith in central planners at the Fed has rarely been higher — including faith that the Fed can implement a graceful exit from its easy money policies.

I suspect that faith will end in tears.