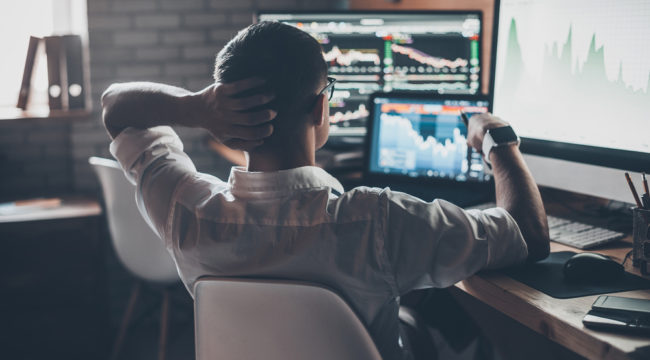 The Perils of Complacency

Even after Wednesday’s stock market rout, more analysts are referring to current stock index levels as a “bubble.” I’m one of them, although I make the point that bubbles can last a long time and don’t pop just because valuations are stretched.

It’s helpful to remember that Alan Greenspan called the stock market a bubble in 1996 (that was his “irrational exuberance” speech), but the bubble did not burst until 2000. This bubble won’t go on for four years, but it could go on for months before there’s a significant correction.

But here’s a twist. It’s not only analysts who are calling this a bubble. The Federal Reserve has the same concern. The Fed’s focus is on market volatility as measured by the VIX, which is an options contract on the S&P 500.

The problem with volatility is there hasn’t been any outside of this week’s action. Markets have been complacent and did not expect any sudden moves to the downside. It’s when markets are most complacent that sudden drops are most likely.

August 2015 and January 2016 are good examples. Once stocks stabilize and complacency returns, another drop might not be far behind.

In recent decades, mainstream economists insisted that markets are highly efficient, and do a near perfect job of digesting available information and correctly pricing assets today to take account of future events based on that information.

In fact, nothing could be further from the truth.

Markets do offer valuable information to analysts, but they are far from efficient. Markets can be rational or irrational. Markets can be volatile, irrationally exuberant, or in a complete state of panic depending upon the emotions of investors, herd behavior, and the specific array of preferences when a new shock emerges.

Market commentators had been marveling for months about the lack of volatility in stocks and how the market only seems to go up (or at worst sideways) since the election of Donald Trump on Nov. 8, 2016. Wednesday’s market action put an end to all that for now.

Stocks plunged almost 2%, the most in one day since last September. Volatility spiked, while gold and bonds rallied on a flight to quality. The dollar sank and the euro continued its slow, steady climb above $1.10.

All of this action — basically a month’s worth of market movement crammed into one day — is attributable to the sudden perception in markets that the Trump agenda, and therefore the “Trump relation trade,” is in serious jeopardy.

This is due to revelations involving Russian influence, James Comey’s memos and passing classified information to Russia by Trump. Suddenly, talk of “impeachment” and “President Pence” is in the air.

My job is to stick to markets and not get involved in partisan bickering and D.C. talking points. But when the Washington noise gets loud enough, I have to assess the impact that may have on markets. I’ve been warning about these political dangers for a while, and on Wednesday the market as a whole caught up with my warnings.

Here are some important points to bear in mind:

Trump did not collude with the Russians to rig the election. Some associates may have had some conflicts and inappropriate contacts, but that’s not the same as implicating Trump himself.

Trump did not engage in obstruction of justice.

His meeting with FBI Director Comey shows poor judgment, and his reported choice of words in the meeting (if true) shows even worse judgment. But bad judgment is not a crime; it’s just dumb.

Getting right down to it, President Trump will not be impeached.

That will not happen as long as Republicans control the House of Representatives. Democrat hopes of regaining the House in 2018 are mostly wishful thinking (that’s because of the way congressional districts are established), and even if they win, any relevant investigations will mostly be over by that point. Trump will be exonerated, if not unscathed.

I believe we’ve just about reached peak political hysteria, and I expect things to calm down a bit from here. The controversy isn’t going away anytime soon, but I don’t believe the intensity can last much longer.

Now, that does not mean it’s all rosy from here on in. It’s not. The opposition to Trump from Democrats, the media, the Resistance, the Deep State and many Republicans is not about to end. One allegation will replace another, and one investigation will lead to another — all fed by Deep State leaks, media spin, Resistance demonstrations and lack of Republican cohesion.

And all this dysfunction in Washington will have real-world consequences for markets. Tax cuts, tax reform and massive infrastructure spending will not happen this year. Obamacare repeal may happen in some form, but that is the least impactful part of the Trump agenda in terms of economic growth.

A government shutdown over spending priorities is a real possibility for Oct. 1. The recent budget resolution only kicked the can down the road. A nasty debt ceiling fight could begin right after that.

The Fed is still on track to raise interest rates in June. The stock market action Wednesday was no more than a speed bump for the Fed. It will not stop the Fed from moving forward with another 0.25% rate increase, especially with the way markets bounced back yesterday and today.

Markets drew some relief from the appointment of a special counsel late Wednesday to handle the Russia investigations. It would not be surprising to see stocks continue to bounce back once the D.C. noise level is dialed down and the president heads abroad to Saudi Arabia, Israel and Italy. He’s scheduled to depart today.

But the most important development this week may be the one you never heard about on the news or the internet. On May 10, gold launched a decisive turnaround from its most recent decline. This kept intact the pattern I’ve been writing about for weeks of “higher highs, and higher lows” as every retreat finds a footing higher than the one before and each new high reaches new, higher ground.

Each time gold retreated from those highs, it found a new bottom at a higher price than the time before. The recent low was $1,218/oz on May 10. In this new spike, gold has now rallied to $1,251 as of early Friday.

No market moves up in a straight line, and gold won’t either. But what we’re seeing right now is very encouraging.

While everyone is focused on the Washington circus this week, they’re missing what could be the real news — gold.