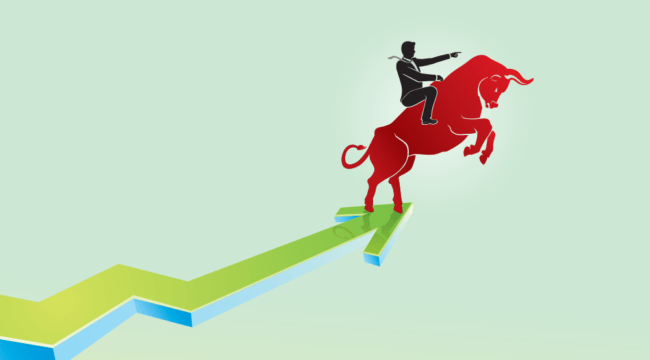 Extrapolating the future from the present is a classic investing mistake. Many investors behave as if present market conditions will continue into the future. If it’s a bear market, you’ll never see a bull market again. Sell everything, the sky is falling!

On the other hand, if it’s a bull market, it’s never going to end. Put all your money in stocks, and you’ll be rich, despite any temporary downturn. The Fed has our back. Forget about anything else; the Fed controls the market.

It comes down to “recency bias” rather than detailed analysis. We’re all susceptible to it. It’s basically hard-wired into our brains. That’s why investors make the same mistake over and over again.

In many ways, that’s why we have booms and busts over and over again. As they say, nothing changes but the date.

And near bull market peaks, people expect stocks to continue rising, more or less indefinitely. Otherwise, they wouldn’t be buying so aggressively.

Having said that, where do we stand today?

Plentiful evidence suggests that we are close to a bull market peak. That means investors are buying hand over fist. Let’s back up…

What happened from February-March 2020 wasn’t really a bear market. It was more like the 1987 crash, only in slow motion, spread out over three weeks.

A real bear market tends to last for a year or two. It includes many false dawns and failed rallies.

One of the best pieces of evidence that we are close to a bull market peak are sentiment surveys which measure how high investors’ expectations have become.

In a July 2 column in the Wall Street Journal entitled “When a 59% Return Just Isn’t Enough,” Jason Zweig explains the results of a large survey:

“In a recent survey of 750 U.S. individual investors, Natixis Investment Managers found these people expect to earn 17.3% this year, after inflation.”

“Over the long run, however, the people in the Natixis survey anticipate earning an average of 17.5% annually, after inflation — even higher than for this year. That’s up from the 10.9% long-term return they expected in 2019, the previous round of the survey.

“It’s also more than twice the return on U.S. stocks since 1926, which has averaged 7.1% annually after inflation. It’s more than triple their 5.3% return over the same period after both inflation and taxes, according to Morningstar.”

Expecting to earn 17.5% per year in stocks over the long term is only reasonable if you are measuring from the trough of a horrendous bear market. But expecting to earn that much starting from today’s valuations is practically delusional. The math is conclusive.

If you’re looking for a thorough overview of the risks in the market today, I recommend the comments by John Hussman. He’s perhaps the most mathematically rigorous and intellectually honest fund manager in the market.

In Hussman’s May 2 comment, he mentions that many investors extrapolate pleasant historical returns far into the future near bull market peaks:

“Investors have already driven the S&P 500 to the most extreme valuation multiples in history. But instead of basing their expectations for future returns on historically reliable valuation measures, they have, in the words of Graham & Dodd, transferred their attention almost exclusively to the trend. Indeed, there is an almost universal expectation that a recovery in the private economy will augment fundamentals with massive growth.

This kind of double-chicken counting ignores the enormous amount of private income and spending that will be needed simply to substitute for trillion-dollar deficits that have held fundamentals near their pre-pandemic highs.

Everyone’s a Genius During a Bull Market

As Galbraith wrote of prior speculative episodes, ‘As long as they are in, they have a strong pecuniary commitment to the belief in the unique personal intelligence that tells them that there will be yet more.’

“The apparent stability of the market is living off of momentum here, so an initial break from recent highs – particularly in equities and low-grade credit – may amplify rather than lessen downside risk, because it would encourage a rush for the door. Our outlook will change as observable conditions do.

“It’s worth remembering that air-pockets, panics, and crashes typically reflect a depressed and inadequate risk premium being driven higher. No other ‘catalyst’ is needed but a brief bout of risk-aversion or profit-taking that nicks overleveraged investors enough to provoke a concerted and self-reinforcing attempt to exit.”

Later on, Hussman explains how the S&P 500 Index could wind up being flat over the next 20 years. It would be an interesting (but ultimately unsatisfying) journey that could include several bear markets and several powerful rallies:

“Given that the market can go from extreme overvaluation to undervaluation even over a small number of years, the long-term prospects of the market could look vastly stronger even a couple of years from today. So, keep in mind that these statements all reflect the starting point of current valuation extremes.

“From this particular starting point, I expect that the S&P 500 will go nowhere for something approaching 20 years.

“I realize that the last sentence was accompanied by a collective ‘pffft’ of spit-takes, followed by the spray of coffee on computer screens everywhere. About 80% of those spit-takes were probably accompanied by incredulous laughter, and about 20% by the recognition, among those who understand market history, that I’m completely serious.

The Natixis survey cited in Zweig’s column concludes with a number indicating most investors have no idea what kind of risk they have to take to generate such a high long-term portfolio return:

“77% of the U.S. investors in the Natixis survey say that if they were forced to choose, they would rather keep their money safe than earn a high return.

“That implies their expectation of getting 17.5% out of their stock portfolios is more a wish or a dream than a rational forecast.”

Break Free of the Herd

To get large, compound annual returns in your stock portfolio, it helps if:

How many investors have the nerve to do these things?

But having cash and a small portfolio allocation to puts gives you the buying power to go on offense when the next bear market gets difficult. At that point, over-leveraged investors will be bailing out of high-quality stocks, and will not have the cash to buy stocks that are on sale.

The sharp decline on Monday may have been the start of a deeper correction, a bear market, or a bull market correction, despite the bounce-back rally.

We’ll only know the answer in hindsight. But I advise that you tread carefully.